What's In a Name?

When it comes to Ravelry, I was pretty much an early-adapter.

When I first signed up -- and this was BEFORE I ever commented on anyone's blog (although I did read y'all), BEFORE I had cancer, and BEFORE I realized that you just couldn't hide your identity on the Internets), I didn't know what "Ravelry name" to choose.

So, after weighing my options, I ended up choosing "knitonegardentoo."  And . . . it sufficed.  It reflected two of my personal passions.  It was (ever so slightly) a play on words.  And - best of all - it was anonymous.

After the first couple of years, though, I hated that Ravelry name!

Yesterday, I decided to finally change it.

How about my blog name?

Related to my blog name?

Finally, I decided to change my Ravelry name to SteppingAway.

Related to my blog name.  Short.  Easy.  Doesn't look too awkward in print. 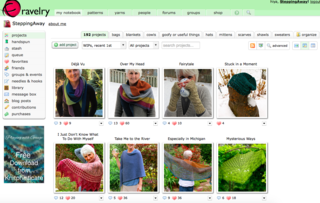 It's super easy to change your name on Ravelry -- and you can do it three times!  So.  If you (too) picked something weird when you originally signed up, you can try something new.  Easy-peasy.

If you want to find out YOUR Ravelry number, just go to your profile page and type the following key sequence (using your arrow keys):  up up down down left right left right b a (those are lower case letters) and your Ravelry number will magically show up under your "member since" statistic.  (Take a screen shot, though, or write it down, because it won't stay there.)

I had no idea what name to use when I was first asked to sign up so I got very creative and picked "margene". #136, talk about early adopter. :)
I like your new name and it fits you perfectly!

I was just admiring admiring "knitonegardentoo" the other day, but I think I can adjust to this change ;) Ravelry growth must have been amazing in the early days; I joined in June 2007 as #1711, and you are #11638 in Sept. 2007. That's more than 9900 people in only 3 months. Have a great weekend, SteppingAway!

My ravelry number is 31. So there.

I had no idea that we could change our Rav names!

I like my name and it's the same as my blog... it wasn't quite as unique as I'd hoped, though, as the domain and emails were claimed by the time I got around to that part, so have preceded it with a "v" or "vicki" in some instances.

SteppingAway--perfect. Thanks for all the information--I was a late adopter! Happy weekend!

Love your name change! I was lucky to have signed up fairly early and having an odd name insured it wasn't already taken.

Carole beats me, but only just. 43, and I just used my damn name!

#6324 I remember having to wait a while to get an invitation to sign up.

Good choice for the new name.

5312 reporting -- and that's just from July. Used my own name, too - though in those days I was still thinking anonymity was desirable and possible. But Ravelry seemed less exposed. Now I feel like having my own name marks me as a (kind of) early Raveler.

Good choice on the name.