Yesterday, it snowed here in Kalamazoo.

Not so much (or so cold) that the snow accumulated on the ground or anything.

But still.  There were flakes falling all day long. 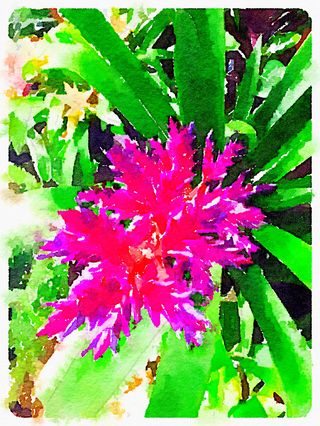 and some poetry!  This one always makes me smile. . .

"More Than a Woman"

Ever since I woke up today,
a song has been playing uncontrollably
in my head - a tape looping

over the spools of the brain,
a rosary in the hands of a frenetic nun,
mad fan belt of a tune.

from my ears to the center of my cortex.
It is a song so cloying and vapid
I won't even bother mentioning the title,

but on it plays as if I were a turntable
covered with dancing children
and their spooky pantomimes,

as if everything I had ever learned
was being slowly replaced
by its slinky chords and the puff-balls of its lyrics.

It played while I watered the plants
and continued when I brought in the mail
and fanned out the letters on a table.

It repeated itself when I took a walk
and watched from a bridge
brown leaves floating in the channels of a current.

Late in the afternoon it seemed to fade,
but I heard it again at the restaurant
when I peered in at the lobsters

lying on the bottom of an illuminated
tank which was filled to the brim
with their copious tears.

I could be listening to the music of the spheres,
the sound no one ever hears
because it has been playing forever,

only the spheres are colored pool balls,
and the music is oozing from a jukebox
whose lights I can just make out through the clouds. 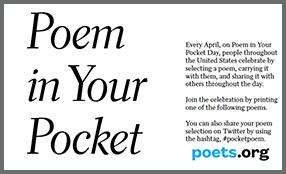 Join me next Thursday (April 30) for Poem in Your Pocket Day (part of the National Poetry Day celebration).  I'll be posting another poem here -- and I'm going to share bits of poetry in other ways that day, too.

I knew from the first stanza it was a Billy Collins poem. Love the idea of Poem in your Pocket. I use the Poetry Foundation app from time to time, to find something to read when I'm sitting in the park. It would be fun to share one of the poems I find.

...finally catching up here after my weekend away - you've been busy (as always)! love seeing your garden come back to life. Mumbai traffic seems a lot like what Marc sees in China. Scares me to think about it (and also to drive with him when he's first back...takes a few days for him to readjust to US driving). Sara said it snowed in Madison yesterday, too. She didn't seem too upset about it; I guess she's become a Northern girl in just 10 months! and finally, thank you for the reminder about Poem in Your Pocket. Look forward to all the poetry next Thursday!

Thanks for that and the beautiful pic. I've already picked my poem! ;-)

We saw some flakes fall yesterday, too. I didn't leave the house. (Doing battle with a cold, too, so that might have something to do with it.)

There was snow in MN, as well; loved my cousin's FB status update: "Not going to make eye contact with the snow this morning..."