A Bevy of Misfortune

When people ask me about my daughter, Erin, I usually describe her as unusually perceptive . . . with a unique worldview and a wicked sense of humor.  She's also an excellent writer with a quick wit.  And . . . she has a rather volatile temper.  (Ahem.) 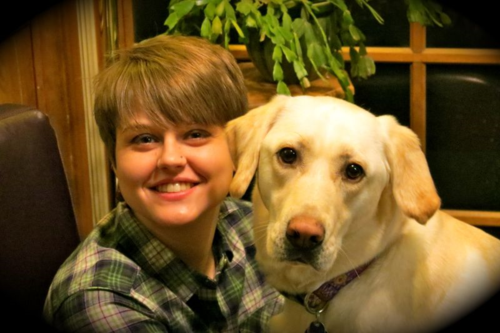 I used to worry about her on the road or when confronted with life's obstacles.  Because That Temper + her proclivity for retaliation + quick wit/loose tongue = Trouble.

But, as she's grown up, she has calmed a bit.  She no longer wishes complete evil on those who irritate her.  She's discovered her own strategy for keeping her emotions in check and her temper under control.

Now, instead of blurting out some well-timed, cutting remark (usually outloud, I may add), she wishes people a "bevy of misfortune" instead (and, thankfully -- in writing).

Now, when Erin encounters "an idiot" in her day-to-day life, she holds her tongue . . . and silently types out a note like this one on her phone:

"And I hope that today his afternoon coffee gets cold too quickly, that he drops his keys in a snow bank and finds them but only after snow has gotten in his glove, has a bad commute, burns his dinner just a little, is unable to take a nightly crap because he is constipated, and falls asleep before he finishes doing everything he needs to do."

A bevy of misfortune, indeed!

She has learned (the hard way, of course) that it's not always in your best interest to comment publicly when issues are controversial.  What to do?  Wish them a bevy of misfortune . . . on your own timeline, of course! 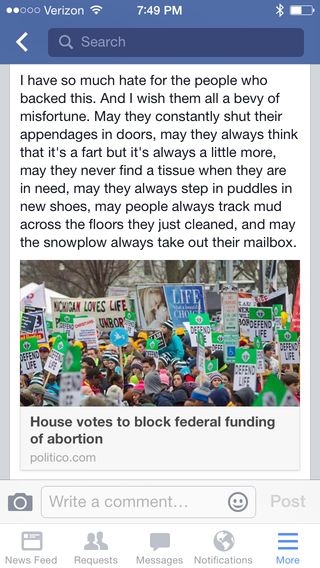 I am completely taken with her concept of wishing those who annoy . . . a bevy of misfortune!

To the woman who was rude to the cashier at the grocery store on Monday . . . May your plastic hangers all have rough spots that snag your favorite clothes, may your windshield wiper leave a streak just in your field of vision, and may you run out of toilet paper just when you need it most.

I like this approach, and like you, may have to start using it myself. (And OH the snag on the favorite clothes thing is the best!)

I really, really understand this impulse and kudos to your daughter for finding ways that work for her. Currently I'm experimenting with another way...trying to muster up compassion for the people that irritate me. Very zen. Very difficult.

Excellent response! Misfortune seems to have fallen upon http://thedailymisfortune.com/ as they have stopped posting, but there are archives in case you and/or Erin need some misfortunes to add to the bevy.

I often wish people a big fat stubbed toe. I'd like to meet that girl one day!

Just saying a "bevy of misfortune" would be enough for me. The term makes me laugh, which takes away all anger.

You have given me a great gift--a useful tool for dealing with frustration--and boy, did I need that today!

It's a great way to deal with anger and frustration without actually acting on it. I love the concept!

To the rude associate at a craft store (HL), May you realize you're locked out of your car when you think you can finally go home particularly on a cold night.
I feel much better, thanks!!!

Hahahaha! I love it! You can add "very smart young lady" to your list of things you say when you describe Erin.

I am loving Erin!

I am backing thru my missed reading - a bevvy of misfortune goes on my list of things to remember.....excellent examples - the 'fart' one is spot on...