Knitting: The Dark Side

When I post about knitting these days, it's usually to share nice, finished, well-behaved projects in lovely, staged photo shoots.

After finishing this most lovely shawl . . . and then after getting "stuck" on a certain hat pattern . . . I just sort of felt like knitting a sweater.

After perusing Ravelry (for far too long), I decided that I was in the mood for a pullover.  And,  ultimately, I decided on this one.

After an extensive stash-dive, I decided to try some of this lovely stuff.  It's been kind of burning-a-hole in my stash . . . after I picked it up last year for a song -- at a "discontinued close-out" at my local yarn shop.

I knew, from the start, that I was treading in deep, dark water.

First, I'm not a fan of top-down sweaters -- and especially not when they're pullovers.  (Wonky necklines and such.)

Second, I only have 900 yards of the yarn -- with little-to-no chance of getting more.  (Because discontinued.)  (And I tend to be one of those knitters that always has to break into that one, last skein --- even if just for 3 feet . . . just to bind off.)

So I got started.  And I was right.  The neckline was wonky.  (Although that might be salvaged with the finishing.)  And I was hemorrhaging yarn from the git-go! (All that texture.)  After using three of my nine skeins, I was only this far along . . . I got Serious.  I did the maths.  (I was definitely going to be cutting it short on yardage.)  I tried it on.  (Maybe I wouldn't like the fit.) 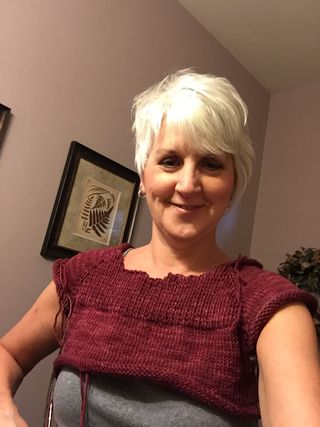 I decided to go ahead and knit the neck ribbing -- and start weighing every couple of rows or so. 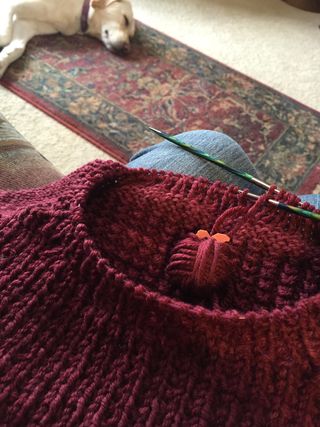 I made careful notes.  I did some more maths.  I weighed again.  I knit half a sleeve. 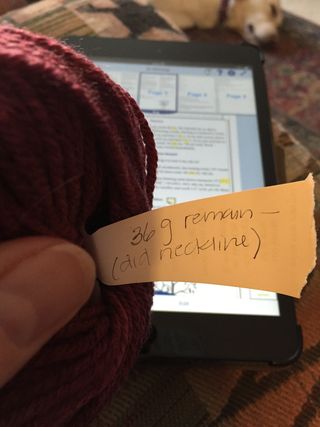 It became ever-more-clear . . . that I had entered the Dark Side.
I was over my head!
I was definitely not going to have enough yarn.
I didn't want to go through the hassle of begging Other Knitters to sell me some. 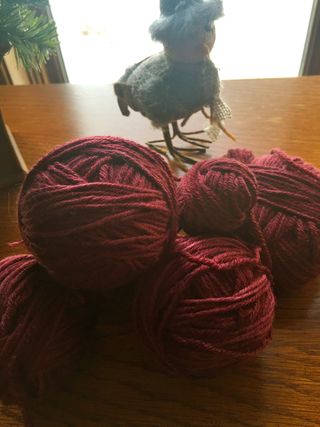 I called it quits.
I ripped.

Sometimes knitting just doesn't . . . add up!
And it's best to quit before you drown.

(But I did learn that I want to knit this particular sweater again.  I just want to use yarn that I have PLENTY of from the start!)

*sigh* it would've been a lovely yarn and pattern match...with just one more skein! hope you find another project soon - you need to get 2015 knitting off to a better start!

I'm so sorry you lost this game of yarn chicken and hope you find good ways to use both that lovely pattern and yarn.

Darn! Hmmm. Could that yarn work with a looser gauge? If you could get close to 14 r/20 st, you could probably do "il grande favorito". Some people have used Eco wool for that, which might not be too different from your yarn. The yardage would probably be plenty, and it has a much nicer neckline than most top-down pullovers.

That's such a nice pattern! Sorry 'bout that my friend!

I've been eying that sweater (and others like it) as it would be a comfy cozy pullover for cold winter days. Hope you find something that makes your knitters heart sing. It's tough after a grand project like CF.

It's going to be a great sweater...when you have enough yarn! Good decision to rip before you were at the bottom ribbing and just didn't have enough. o.0