A Kind of Stuck

I didn't have much time for knitting earlier this fall, and all of the time I did have was spent on this project.  Once that was complete, I didn't really know what to knit next. 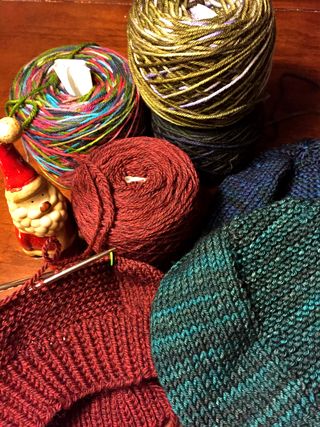 Not even for Christmas gifts.  (Except for that dark blue/black one you can barely see in the photo above.  It's the first thing I've knit - so far - for Brian's girlfriend, Lauren.)  (And I did wrap that one up and put it under the tree for her.  Sadly, no photo.) 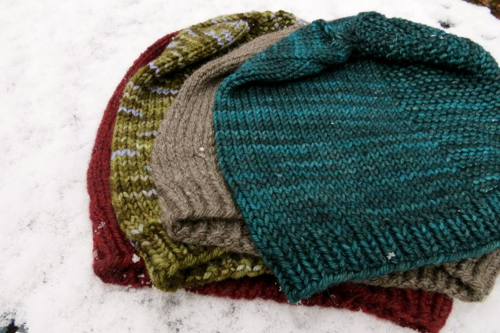 When you want some instant knitting-gratification, there's really nothing better than a great hat pattern paired with lovely yarn.

And there's a quick payoff, too.  Both Brian and Tom think it's the "best hat you've ever knitted for me." 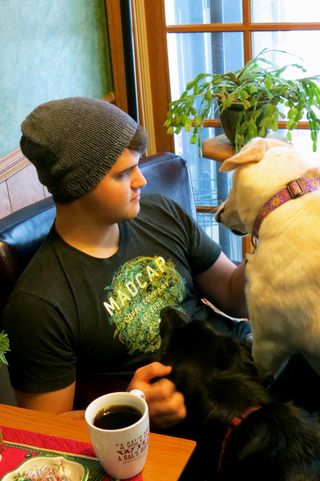 I have a feeling this isn't the last time I'll get stuck in this kind of moment!

*  I actually knit seven-and-a-half of these hats.  One was a total knit-over (because I forgot to switch my needles after the ribbing and it would've been far too small for the intended recipient).  And I started a seventh with some colorful yarn (you can see it in the first photo in this post), but it looked like clown-barf when knit up, so I ripped it at the half-way point (I gave it a good chance) and decided to move on.

Hats like that are like potato chips - you can't have just one! I get on those knitting jags, too, usually with dishcloths. Fun and fast and practical without having to think about it too much is perfect holiday knitting.

The best! I'm on my third since December and almost done. I've got Dan coming next week so I'm going to check out this pattern for him. Thank-you!!!

After a long time, very large project, turning to something easy and enjoyable is all that's needed. Plus, you have a houseful of happy people!

What a delightful place to get stuck! Two votes for the "best hat you've ever knitted for me" is the best recommendation ever, and a sign that I may need to make a couple of these!

I love that pattern! haven't actually used it for myself, but a few of my students have. It always turns out great, and it's quick. (are you on to something else now?)

Yay for all the hats! I bet you are probably ready to move on to something more challenging now tho...