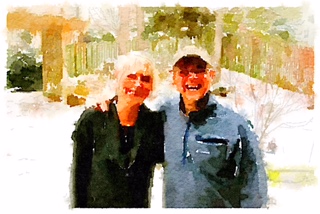 When it's late at night and branches
are banging against the windows,
you might think that love is just a matter

of leaping out of the frying pan of yourself
into the fire of someone else,
but it's a little more complicated than that.

It's more like trading the two birds
who might be hiding in that bush
for the one you are not holding in your hand.

A wise man once said that love
was like forcing a horse to drink
but then everyone stopped thinking of him as wise.

Let us be clear about something.
Love is not as simple as getting up
on the wrong side of the bed wearing the emperor's clothes.

No, it's more like the way the pen
feels after it has defeated the sword.
It's a little like the penny saved or the nine dropped stitches.

You look at me through the halo of the last candle
and tell me love is an ill wind
that has no turning, a road that blows no good,

but I am here to remind you,
as our shadows tremble on the walls,
that love is the early bird who is better late than never.

Through his poetry Billy Collins expresses, and explains, how many of us feel about life and love. Kym, in a weird twist of fate, yesterday I visited the LBS and bought the Aimless love and The Trouble with Poetry collections.

This is lovely and speaks volumes about long time love. It changes over time, you give up parts of yourself, but you get parts of someone else and it all works together to make life a fine thing.

You've given me a real gift each and every Sunday. I hope I can look and find more poetry in my world in 2015. Xo

I'm with Patty; thank you for giving me the gift of poetry and poets I might never have heard of otherwise.

That last line is totally getting to me.

here's to more poetry! you have a gift for finding just the right ones to share. and the illustrations add the perfect touch. thank you!