Stepping Away from the Edge
Home Archives Profile Subscribe
Postcards from Italy: Welcome to Venice
Knitting as a Metaphor for Life

Today, Carole has us talking about our Ten Favorite Book Series.

Although I read quite a lot, I don't really follow many book series.  So I'll have to take the slacker approach. . . 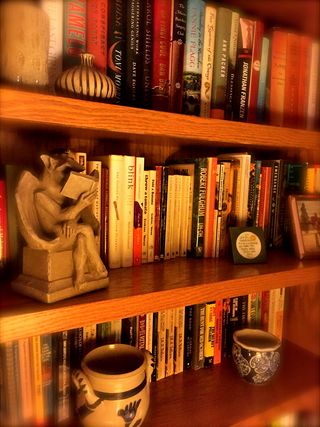 There are two book series that I particularly enjoy, and you'll always find me eager to dive in to the newest installment:

1 --- Louise Penny's Armand Gamache/Three Pines novels - These delightful mysteries are set in Quebec and follow the lives of a particularly artistic cast of characters.  While the characters and setting are fairly consistent from book to book, nothing is predictable -- and characters grow and change and reveal ever-new layers to their personalities with each new book.  I first discovered this wonderful series when I was going through chemo (I think there were only 4 or 5 books at that point) -- and I just devoured them! (There are now 10 books in the series.)

2 --- Tana French's Dublin Murder Squad novels - This series is a bit more on the edgy side, and definitely among the best pychological thrillers I've ever read.  Although there is a cast of recurring characters, the books can really be read as stand-alone novels.  While the cases/mysteries are interesting, for me, it's really about the characters -- and watching them "unfold" during the investigations.  Really excellent reads!  (The fifth book of this series was just published this fall.)

Other series I have read and enjoyed over the years:

4 --- Steig Larsson - The Girl with the Dragon Tattoo Triology (it appears that, perhaps, there will be more books coming in the series. . . although it's usually a bit disappointing when another author takes over a series.)

5 --- Anne Perry - William Monk Series - I just finished reading the first book in this series over the weekend, and found it good enough to try another.  (Also - the author is a convicted murderer herself, so that is a rather intriquing reason to check out her books!)

How about YOU?  What are your favorite book series?

* (I've also read the Harry Potter books, and far too many Stephanie Plum and letter-of-the-alphabet "formula" novels.  I've never gotten into the whole Hunger Games or Outlander things, though.)

Join the fun!  Sign up to recieve Ten on Tuesday prompts here - or read other lists here!

I don't know why I never read beyond the first Three Pines book, but I will have to put them at the top of the pile this winter. You're definitely not a slacker, just a discriminating reader who knows and reads what she likes!

I really need to go back and read more of the Louise Penny books, I've only read the first one. I have read those Stephanie Plum ones and they were fun at first but now they are just so poorly written and formulaic that I'm not sure I can stomach another.

I had a harder time than you (though I'm sure I don't read as much as you these days) and could only think of the Little House series. I honestly think that's the only series I've ever read...

I've got to better organize my time...there are so many books I want to read!

I've read the Dragon Tattoo books but the one I enjoyed the most was a romance novel series by Robyn Carr. Easy reads but with well developed characters...

I can't even begin to answer this one, with any series books that I'll admit to. You aren't a slacker compared to me.

I LOVE that you posted just five today. (I'm putting that in my back pocket for a future week!). I'm looking forward to finding out what happens to Gamache; I've read three.