Stepping Away from the Edge
Home Archives Profile Subscribe
Hot Words on a Cold Day
Year in Review: On (and Off) the Needles

Year in Review: Reading Along in 2013 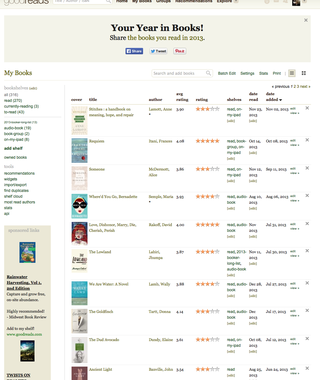 I ended up reading a number of Really Long Books this year  (including We Are Water by Wally Lamb - 576 pages, The Goldfinch by Donna Tartt - 756 pages, Paris by Edward Rutherfurd - 809 pages, David Copperfield by Charles Dickens - 974 pages, Angle of Repose by Wallace Stegner - 569 pages, The Children's Book by A.S. Byatt - 675 pages, and Catherine the Great: Portrait of a Woman - 642 pages).

Just for contrast, I was also . . . disappointed . . . by a few books.  My Biggest Disappointments for 2013 (books I actually finished, but didn't like all that much):

For 2014, I plan to continue reading like a fiend!  Mostly contemporary fiction**, I imagine, with re-reads of some old favorites (Dickens, Austen, and Edith Wharton).  I usually try to throw in at least one or two non-fiction books each year.  And this year, I'll be checking out some travel books, too!

How about you?  What did you especially enjoy reading in 2013?  What are your reading plans for 2014?

*  You can check out my 2013 reading list and star-ratings on my sidebar.

**  I make a lot of my reading selections from the long-lists for the Orange Prize (or whatever it's called now; they changed the name last year) and the Booker Prize.

I get so little reading done but have chosen my last three books from your and Margene's lists! Currently reading Transatlantic - so glad to see it's made the top five!

I enjoy comparing notes and ideas about books with you as we like many of the same titles. I'd put Constellation of Vital Phenomena at the top. I also loved Fault in Our Stars and many of the classics I read as well. I'm going to try The Goldfinch despite your review.

I am midway through The Interestings right now. It is keeping me interested, but if it disappeared from my bedside right now I wouldn't miss it terribly. I returned The Goldfinch to the library halfway through, but I keep wondering how that kid turned out. A lot of similarities between the two books, though, especially that of a teenager from a single-parent, i.e., money-poor, becomes a friend of another teenager from a rich, Upper East Side family and is sorta-kinda adopted by said family. Yeah, that happens a lot, I'm sure...

I read 20 books in 2013 and that's a big jump for me. Using Good Reads has really been a factor in my reading and I can see that my queue is about to grow some more.

I don't read much (can't read and knit at the same time) but Temple posted a list of 16 books to read before the movie version comes out, and they all seem interesting.

I agree with you on The Goldfinch, far too long and I couldn't put down the other 2.

I've just started the Goldfinch, so you're making me nervous, especially because I didn't really care for The Secret History, especially the unlikeable cast of characters (c'mon, can't somebody by worth liking, like for real?)

On the other hand, Angle of Repose is one of my all-time favorites too! Maybe it's due for a re-read.

I have the Goldfinch to listen (it's a bookclub selection, so I'm feeling obligated) ... 40-some hours. at least I can knit! or walk. or.... while I listen! Enjoying following along with you on Goodreads. Between you and Margene, I get wonderful recommendations. Thank you! (Also, I suggested to her that it would be fun to read a book together and then discuss via Skype - thoughts?)