Yesterday, I shared a video clip of Brian's band.  Today, I thought I'd share some of Brian's drum story (and maybe get into a bit of a rant because I can't help myself). 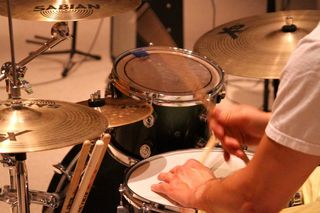 You see, when Brian was a little guy, he was very interested in playing the drums.  He was really looking forward to 6th grade -- when he could start band!  Now, at this point, my kids happened to be in a very serious-about-music school district, and I discovered that the band program was very . . . particular . . . about which kid got to play which instrument.

It wasn't like you just got to choose your instrument in this band program.  Oh, no.  It was all very controlled and exclusive.  (I mean, it would never DO to have a sixth grader simply choose to play an instrument now . . . would it?)  There was a series of surveys and tests to measure interest and aptitude for even being IN band in the first place!  And you had to score within certain ranges to be eligible to TRY to play certain instruments.

(As a parent with some knowledge of band and orchestra, I found this "testing" to be a "gatekeeping" kind of tool, rather than an aptitude kind of tool.  This particular school music program didn't want to have, say, hundreds of flutists and no bassoonists, for example.  So they limited who was eligible to play flute.  And trumpet.  And clarinet.  And percussion.)

Further, if you wanted to play drums, not only did you have to achieve the HIGHEST score on the music aptitude test, but you also had to come into the program with at least 2 years of piano lessons under your belt.

So Brian, who really, Really, REALLY wanted to play drums, suffered through two years of piano (all through 4th grade and all through 5th grade).

He scored 1 point under the required score on the aptitude test to be eligible for percussion!!!

I was ready to take it to the mat!

But the band geniuses in this music program convinced my child that he really wanted to play trombone!  (Because he had a high enough score for trombone, and long arms to boot!)  And so . . . he did. 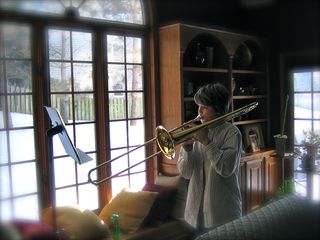 And although Brian made the best of it, and became a pretty darn good trombonist, he still really wanted to play the drums.

To make a long story short, we let Brian learn to play the drums, too.  Just not through the school band program.  (Because, heaven forbid!  A child can only play ONE instrument, y'know?)

Right away, he started playing with bands.  Here he is in 6th grade with The Genuine Rebels.  (Man, they were loud!) 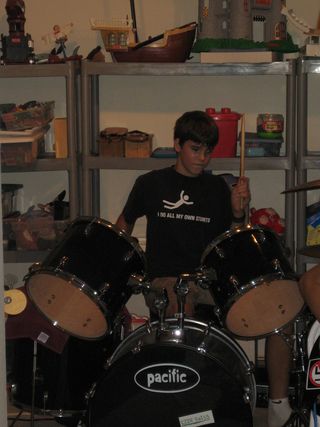 And that band morphed into The Insurgents.  (They were even louder!) 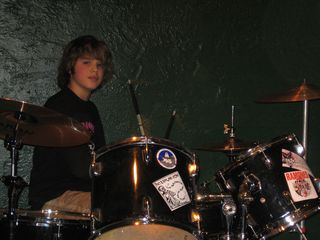 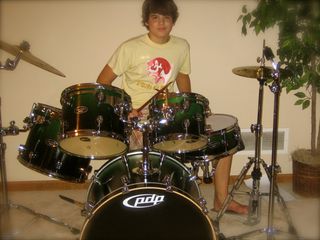 But, still.  There was no room in the high school band for a trombonist that also played percussion!  (Ridiculous, isn't it?)  Ultimately, the marching band did him in.  When he heard the drumline, but couldn't PLAY in the drumline, the trombone was just not gonna cut it anymore.

Enough of the trombone.

But never enough of the drums! 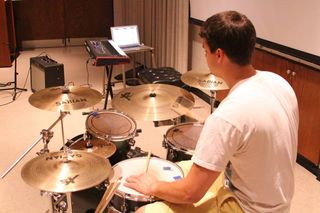 and now with the Fever Haze. 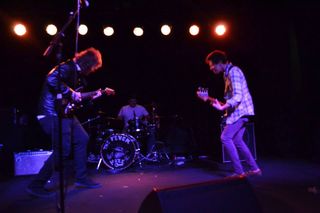 Those school band programs?  They really don't have any way to measure what's in your HEART.  Y'know?

Such a great story! I will give kudos to our small town band program there had to be 15 snare drummers when Dan was in 7th and 8th grade. ;-) Go Brian!

He followed his heart against the odds. Good for him!

What great parents you were/are, to enable Brian to follow his heart! (in spite of the # of decibels that entailed)

Oh my. How did they get anyone to join band when they couldn't play the instrument of their choice? Isn't that the point? That they learn to play something they love instead of what someone else says they should? I think I would have popped a cork!
Yay for you and Brian to have followed through with his love for drums!

I'd have been pissed about that school band program, too. I'm glad he kept at it - you've got to go with your heart when it comes to music!

I swear I think programs like that are staffed by people with symphony dreams and kazoo talent.

appreciate your rant - and feel bad for all the kids who weren't supported by their parents in spite of what the schools said. Kudos to y'all for letting him follow his passion ... and for putting up with all that noise along the way!