Stepping Away from the Edge
Home Archives Profile Subscribe
It's Raining Cats and . . . Chickens!
Fun for a Friday

It's been a week now, since I picked up my new ears.

Friends ask me what it's like.. . to wear hearing aids.  And I answer that it's just like wearing little microphones in your ears.

Which is exactly what they are.  Little microphones behind my ear, amplifying sounds into my ear.  It's really quite amazing.

(I actually delight every time I step outside -  at the bird calls all around me.  So loud and clear and wonderful.  Makes me smile every time.) 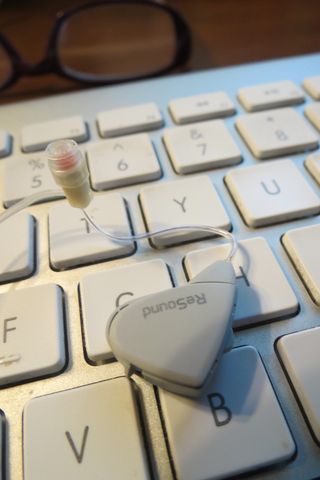 Have you ever heard the Tale of the Boiling Frog?  It's a great metaphor (whether it actually happens or not in Real Life).  It goes like this:  Basically, if you plop a frog into a pot of already-boiling water, he'll immediately jump out.  But.  If the frog is already in the pot, and THEN you turn up the heat and gradually bring the pot to a boil, he'll not jump out -- but just . . . cook himself.

Because, so the metaphor goes, we don't notice change -- unless it's sudden and drastic.  If change is slow and gradual, though, we just adapt.  (Until it's too late.)

Well, hearing is like that.  Over the years, as my hearing gradually deteriorated, my brain just . . . adapted.  It thought of my ever-expanding silence as . . . Normal.

When you get hearing aids, everything (and I mean EVERYthing) is suddenly LOUD.  Because . . . your brain thinks silence is Normal.

It takes a while for your formerly non-hearing brain to adjust to all the new . . . noise.  Ambient noise (the ever-present background noise of life) is a particular problem for new hearing aid wearers.  Other people's cell phone ringtones.  Shuffling paper.  Doors opening and closing.  Keyboard key strokes.  Unwrapping a granola bar.  Windshield wipers.  Fans.  Dog walking across wood floor.  Clocks ticking.  Sounds that people with normal hearing have just learned to ignore are suddenly new and exciting for the hearing aid wearer's brain.

The first few days with my hearing aids, the ambient noise was nearly unbearable.  Just moving a piece of paper from one side of my desk to the other was like . . . firecrackers going off!  I had to move to an entirely different part of the house whenever Tom filled the dishwasher . . . it was that disturbingly loud.  I had headaches from the ambient noise.

It's getting better, though.  Amazingly better - in just a week!  My brain is making the adjustment -- and beginning to tire of the new ambient noise around me, allowing me to move it into the background again.  (Except for highway driving noises.  That's still a problem.  But I have hope!)

I'm also getting used to the sound of my own voice.  Because it's "mic'd" too!  With my hearing aids, I hear myself "in stereo" whenever I speak out loud:  The voice inside my head AND the voice outside my head!  I have had to enlist my friends and family in giving me feedback about how loud I'm speaking.  Because it sounds (to me) like I'm talking really, really LOUD.  But apparently I'm not.  In fact, my feedback so far has been . . . speak up!  That's all getting better, too.  (Although it is scary to hear yourself singing along to songs on your iPod.  Really bizarre.) 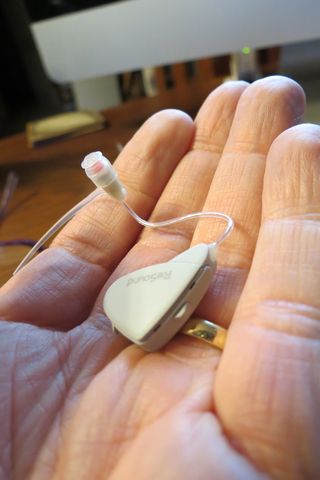 Mostly, though, I'm just in awe of . . . hearing!  Comfortably and easily.  My weekly staff meeting (the situation that ultimately convinced me I had to Do Something) was amazing.  I could hear everything.  I didn't have to place myself Just So.  I didn't even have to look at the speakers around the table to be able to "get" what they were saying.

No wonder many people won't wear their hearing aids as they can't stand all that noise, but you're doing the right thing in allowing your brain time to adjust and process the change.
My hearing is hyper-sensitive which is why I wear my iPod at work, with either a book or music in my ear. I'm trying to shut out the ambient sounds of the office around me. I can imagine what it's like for you to hear sound like that for the first time, as they can be so annoying! You are having a surprising year, a year of NEW!

That is great! I spent a year with Doug telling me I was mumbling. Finally I said I don't think so dude...you can't hear very well any more!

Plural... you have an aid for each ear? I know from experience that one can wait too long and that it's near impossible to "get used to" noise. I don't have great insurance, but you have me convinced to make this a priority (right after the colonoscopy, but before new glasses?). Thanks for sharing your experience.

From what my dad told me, it's hard to deal with the background noise. I'm so glad you're adjusting to the noise of life! :)
It's my eyesight that I need to "keep an eye on". There is macular degeneration, cataracts, and glaucoma in the immediate family...

Larry (finally) got some last year, and he's been very happy with them. Glad yours are working out well, too.

IM thrilled for you .. HOw wonderful that it is such a tiny sleek looking device!!

I am so happy to hear of your journey adjusting to your new 'noise'. I know my hearing has diminished over the years, but I still crank my car stereo! I do wonder how it must be, learning to let noise fall in to the background- I get overstimulated so easily in crowds with lots of noise and movement. Congrats on seizing the issue and being in the moment as you adjust. I will follow your progress with interest:)

Congratulations on your new "ears"! Today's units are so small and easily hidden. It's a wonderful world out there and I'm glad you can now hear all of it.

Sounds like you're adjusting and adapting perfectly. Your experience of stepping outside and hearing the birds reminds me of when I got my first pair of glasses and I went outside and I could see LEAVES on the TREES!

The Boiling Frog metaphor was the perfect way to describe hearing loss and getting a hearing aid. I got so used to the silence that when I got mine fitted, I was left in awe as if I've never heard anything in my entire life. But once the awe disappeared, I found myself jumping at every little sound and often wanted to rip it out to leave me back in silence. But like you, it did get better and I'm adapting well. :)