Here we are, in the midst of the Month of Letters.  I thought it might be fun to reflect on . . .

I know that now, in the days of "de minimis gift" pre-printed return address labels from MANY a non-profit organization, it is hard to remember that, once-upon-a-time, we had to purchase our own lables.  Or, perish the thought, write your own return address in the corner of your envelope!

(Brian recently asked me "what's the point" of return addresses on envelopes.  I explained the whole "return to sender" thing.  He was rather stymied.  Oh, The Young.  And their dependence on e-everthing. . . )

In the early years of our relationship, Tom and I went to different colleges.  (He was then at Boise State and - that time - I was at the University of Wyoming).  We wrote letters to each other.  Lots of letters.  Often, several each week.

With that many letters coming and going, you tend to turn to amusement with the mundane task of  letter-addressing.  (And some people more than others.)  Most of Tom's return addresses looked like this. . . 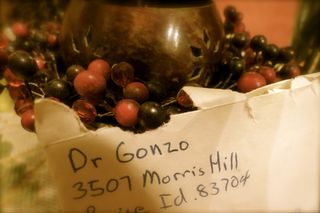 But sometimes, he got a little creative. 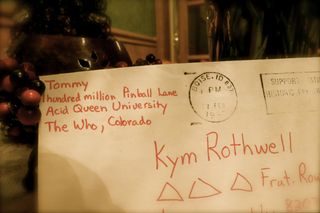 And a little silly. 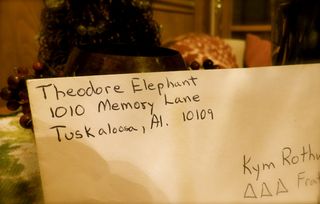 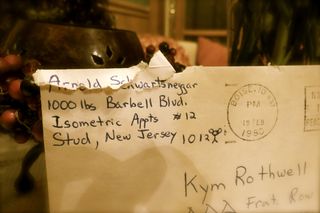 I remember the girls that I lived with in the Tri-Delt house used to love to sort out Tom's letters and display them on the very top of the day's mail pile.  His return addresses were pretty entertaining - for everyone! 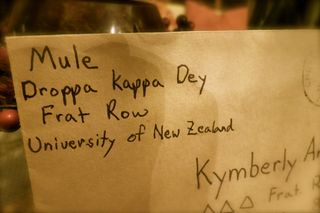 Good thing he wrote my name and address so clearly on the front of the envelope . . . because . . . who knows WHERE these letters may have been delivered, had there been any delivery issues.

Return to sender?  Yeah.  Good luck with that!

Funny and creative! Love it!
Getting a real letter in the mail was so much fun. Now it seems like there are only bills and credit card offers.
xoxo

You married a very fun and creative guy! Good thing your name and address were legible. The postal carrier must have loved it, too.

Love that. So amusing!!

That is so fun and funny! What a riot. And I thought I was funny writing "hello" to the mailman on postcards I sent to the neighbors!

Those are fantastic! No wonder you married him! Dale and I have a big bag full of love letters, cards and notes that we wrote to each other the year we were dating. We saw each other pretty much every day and we only lived one town apart but we still wrote to each other a lot and I'm so glad we did.

That's just too cute. I never even gave a fake return mail addy a thought!

You should tell Brian it's the snail version of having an email bounce back. ;^)