As I mentioned last week, I finished my "Tinder" cardigan.  And I really, really love it!  When Tom comes home, I'll get some photos and do a proper post.  But, for now, I'll tell you the story about how a couple of 2-inch button bands and 7 22 simple buttonholes kicked my butt. 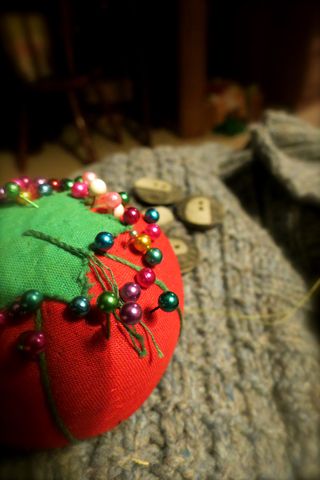 Once upon a time, there was a cardigan that was nearly finished.  The pieces were knit to specifications.  The seaming was complete.  The fit was perfect.  The collar picked up and knit.

All that remained . . . were the buttonbands!  Simple, straightforward, 2-inch buttonbands.

When the first of the buttonband was complete, The Knitter could see that she probably hadn't picked up quite enough stitches, because it pulled in just slightly more than expected.

I can Live With It, The Knitter said.  It'll block out.

But after a day of thinking, The Knitter knew she was Kidding Herself.  The buttonband Wasn't Right.  She would Regret it Forever.  So she ripped the buttonband out and Knit It Again. 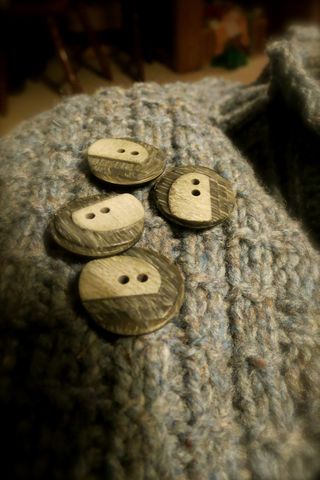 So, The Knitter carefully marked the placement of the buttonholes.  She studied the directions for Elizabeth Zimmermann's one-row buttonholes, which were exquisitely and clearly described in the pattern (Jared Flood does not scrimp when it comes to direction!).

The Knitter made the first buttonhole.

Kind of wonky, she said.  Maybe it will Look Better when the next row is complete.  (As is often the case with buttonholes.)

So she went on.  The second buttonhole looked the same.  Kind of wonky.  Must be The Way They Are, she said.

The third buttonhole, once more, looked the same.  Kind of wonky.  Defintely The Way They Are, she said.

The fourth buttonhole?  PERFECT.  (Oh.  So the first three WERE wonky, then.)

Give it a rest.

The Knitter made the first buttonhole.  Kind of wonky, she said.  Didn't it look better than this the other day?

Still, she pressed on.  The second buttonhole looked the same.  Kind of wonky.  (Does she never learn????)

The next day, seven PERFECT buttonholes in a row! 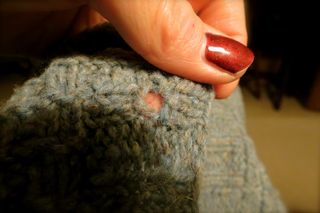 What an IDIOT!  The Knitter said to herself.  And outloud, too. (Many times.  With maybe some other more colorful words thown in for balance.)

Seven more PERFECT buttonholes.  (Bringing the total to 22. . . if you're counting.)

And a perfectly finished buttonband. 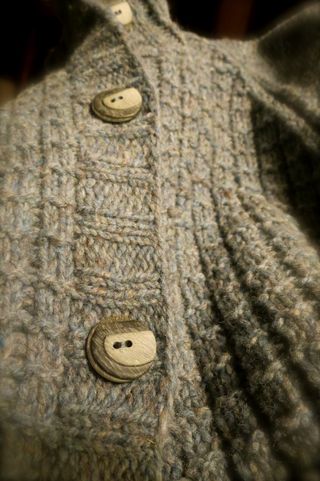 It's always good to hear the woes of another knitter, the wonkiness of stitches, the colorful technical terms and then the PERFECT finish! It's always inspiring to hear the story of a knitters journey.

Buttonholes...I fear them. People fear kitchener, I say bring it on. Buttonholes, not so much. Beautiful job Kym!

I can hear the colorful language because I've used the same type of words myself when knitting! ;)
It looks wonderful and I'm sure you're glad you did all 22 buttonholes.
xoxo

You'll be glad you did it right even if it was a PITA. Sometimes it's easier to just put in a friggin' zipper.

Your cardigan hints on great loveliness, waiting patiently to see it in details!

I have a potentially beautiful cardigan I finished knitting weeks ago waiting patiently in its pieces for the seaming mood to descend on me...

Judging by past experience it can take me years and my sister is not close enough to make some deal with her (I will knit you a cardigan if you will seam both yours and mine was offered more than once in the past).

Oy.
Looks beautiful in the teaser photos, though. Can't wait to see how it looks!

I really admire your refusal to "settle" for a couple of "wonky" buttonholes and working them again and again (!) until they were right! You will now enjoy the sweater so much more. Can't wait to see the modeled pictures of the FO!

While I am sorry for your trouble, it is nice to read that others have tales of knitting trauma, similar to mine. Your buttonholes look perfect and I can't wait to see it ON you!

I apologize for this in advance, but I LOVE to hear about how an experienced and accomplished knitter -- that's you -- had to do something over (and over) again to get it right. Because that means that another, perhaps less experienced and accomplished knitter -- that's ME -- is not a complete idiot, but rather one who also wants it right no matter that it may take longer than she wants.

I have so been there. One of the family stories is of me finishing a cardigan, putting the buttons on going upstairs to try it on, come back downstairs and proceed to unpick the whole thing

And people wonder why I knit so many socks. ;^)

Glad you got the buttonholes worked out. The first sweater I knit had those one-row buttonholes, and I got it to work (I practiced on a swatch quite a bit). But now, I get totally confused if the pattern calls for a two-row buttonhole.

Great nail polish too! What is the color?

ahhh, you know you're going to SO glad you stuck with it...because really, 22, or even 42...who cares. now it's perfect and you'll love it forever!

Can't wait to see the pictures of the whole sweater, on you. Love those buttons!

And good for you to keep working 'till you got it right. I sometimes leave imperfections I can live with, but I've never regretted persisting until it's right. And I've also reknit, or remodelled, years later, because I was still bothered by some thing.