Last night, Tom and I had reservations to take part in the Beer Throw Down, sponsored by one of our favorite local restaurants -- Food Dance.  The concept is simple:  Two brewers go head-to-head in a food-pairings, blind beer tasting showdown.  We eat.  We drink.  We vote. 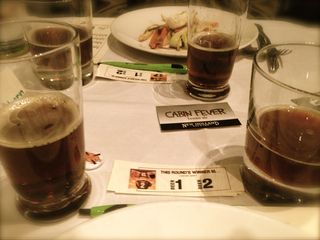 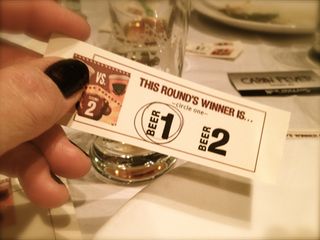 All of the "tasters" were seated together at long tables in a separate room.  Even though most of us didn't know each other when we sat down, we were all pals before the night was over.

Beer does tend to bring folks together.

The food was fabulous (as was the beer) -- and it was so interesting to experience the differences between two beers WITH food.  Some people around me seemed to have problems choosing sometimes -- but I seemed to always have a clear favorite in every round.  (I just gotta say . . . one beer - one that Tom voted for!!! - smelled like pee.  I just couldn't with that one.  But then . . . I am a wine drinker. . . so what do I know?) 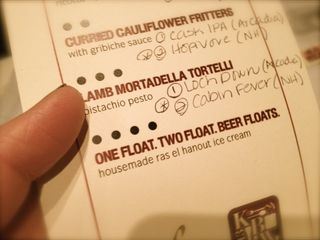 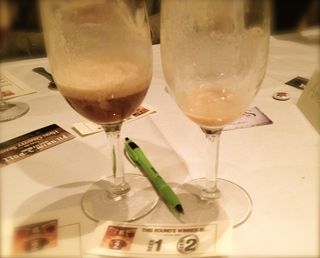 Fun night!  And a great way for Tom to overcome his jet lag! (In the end, the winner was New Holland Brewing . . . in a sweep.  My favorites, every round, as it turned out.)

how fun! I think of beer as kind of a meal on its own. but having real "pairings" sounds like a great way to experience it.

Beer floats? As in ice cream in beer? Somehow that seems very wrong to me! o.0

That sounds like so much fun! Jo-Ann's son is brewing a special beer for us to bring to SPA. Wish you could be there to drink it with us!

Artisan beers are fun to taste and if I could drink beer this would be an event I'd love. As a wine drinker you have a discriminating pallet and can taste the subtleties of the brew. It sounds like a fun night!

Seem to me like a oerfect way to spend an evening and get rid of jet lag in the process although experts claims alcohol is no good match to that lag.... But what do they know, we sufferers know much better!

A smell is a smell no matter what is our favorite drink, no?

So fun...I was just considering a beer dinner at the local brewery here. Doug's not a big craft beer fan though, too bad Dan's not home! :-)

Must get some NEw Holland for Fireman he's taken good care of me this week!

Oh, I wish we could do that -- it sound like such FUN!