It's been a little over a month now . . . since Jenny had her knee surgery.  She's doing quite well, and healing. 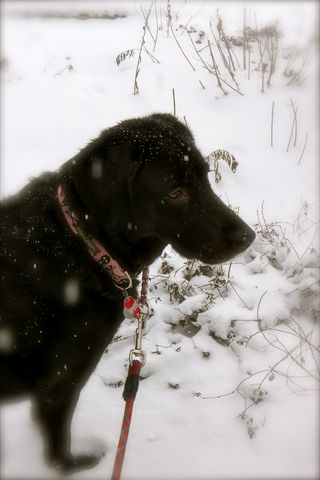 She's still limping, but that's to be expected.  Recovery is long with this type of surgery -- months and months.  The limp is still present -- but she's not in pain, and things are improving. 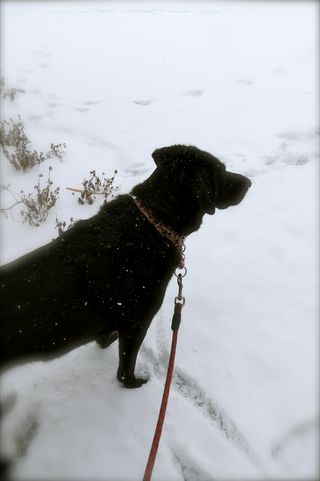 We do daily range-of-motion exercises (which she hates!), followed by deep muscle massage (which she loves!).  We go on daily therapy-walks, slowly lengthening the distance we travel.  We're up to about a half mile now.  Jenny loves her daily walks.

The incision is healed; the stitches are out; the hair on her leg is growing back in. 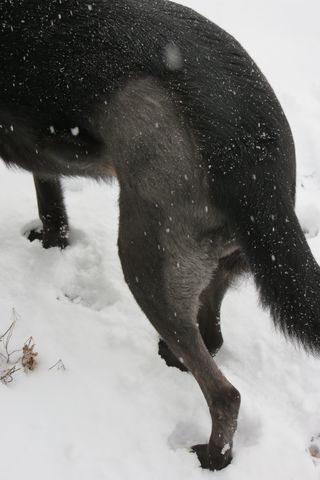 It's funny . . . because the fuzzy undercoat (the "polar fleece" I'll be brushing out come spring) comes in first!

Initially, after her surgery, Jenny was not allowed to get up on any furniture.  (Yeah.  She's sort of spoiled that way.)  It was hard for her -- because she has a few "special" spots in the house where she likes to relax.  But now, she's able to get on "her" couch whenever she pleases. 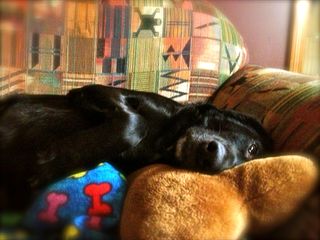 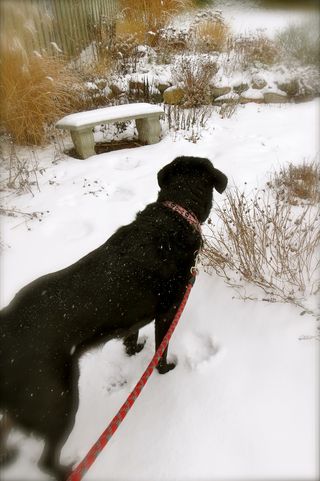 She's learning to ignore the squirrels. . . 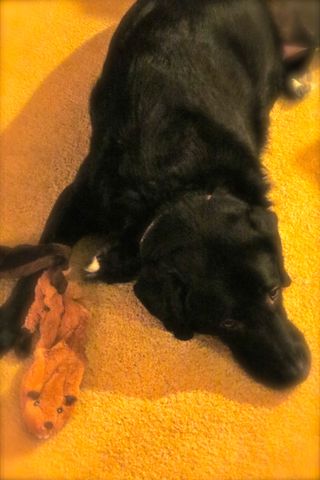 and some special treats from Cherry Republic . . . 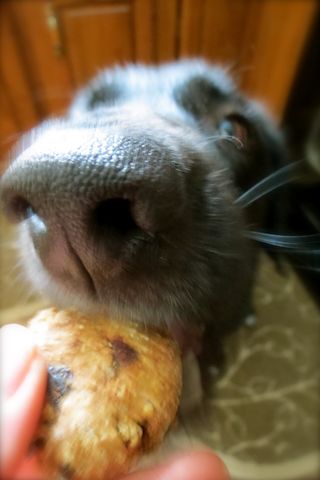 Our pups deserve all the spoiling they can get because of the joy they bring to our lives. Jenny's doing well because she has someone who cares about her and has made sure she'll be around for the long haul. You're both doing well!!

So glad to hear everyone is adjusting to the changes for Jenny and that Jenny is well enough to get up on the couch again. ;)
2nd DS's dog, Aida, goes to the vet today for limping. We are all hoping for an easy fix...

Go Jenny! Such good news and such discipline on everyone's part! Rocket's got a new critter too, has brought the play-dog back to life!

Thanks for the update on Jenny. I'm so glad she is doing well and pleased as punch that Margene updated us on Moxie today and he is much improved. I don't like to think about my dog friends not feeling well!

Oh, Jenny, you are such a sweetie! Glad to hear all is progressing nicely.

Oh, it must be SO HARD to play in the snow without running -- especially when there are squirrels in the picture! I love that photo of Jenny on the couch and I'm so happy to hear of overall progress and improvement. Sweet pup.

Hooray! I'm so glad that recovery is going well. Give her a kiss from me.

aw - thanks for the update - I'm so happy Jenny's recovery is progressing well. realize y'all have a ways to go, but still, you're off to solid start. I cracked up when I saw the squirrel/beaver/whatever. yeah, holly can have a toy for months and you'll be able to tell what it is (provided you can identify an animal without its ears or tail :-)

I'm so glad that she's doing well and taking PT about as well as the rest of us would in her place. All the gentle and careful care will be totally worth it in a few months but that's hard to explain to an eager lab.

Btw, part of me thinks she needs a leg warmer. *L*