Stepping Away from the Edge
Home Archives Profile Subscribe
The Treasure Chest: A Tale of True Confessions
In Living Color

And Now For Something Completely Different

Tom has just returned home from (yet another) trip to India.  (He travels there - mostly to Mumbai - two or three times a year for work.)  I convinced him to do be a "guest blogger" here, so you could enjoy another exotic location --- one that I'd like to see myself someday!

My first guest blog!  Most of my business visits to India are centered in the Mumbai area, sometimes with shorter trips to other Indian cities:  Hyderabad, Chennai, Kolkata, Pune.  But on this trip, I had a chance to visit Delhi, the capital.  My colleague, Todd, and I had a few hours of free time on our Friday in Delhi, but passed on the opportunity to sight-see the numerous sights there since we were both jet-lagged and had teleconferences with the US later in the evening (accomodating the 9.5 hour time difference).  We did take the long way back to our hotel, though, so I could get some photos of the monkeys in the local park. 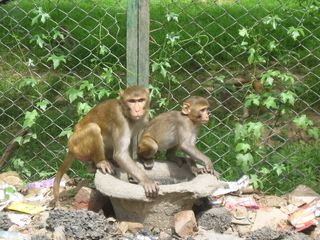 In some places, these guys are as abundant as squirrels are in US parks.  People feed them.  I thought they were exotic, having never seen monkeys other than in a zoo (excluding a few I'd seen in other parts of India -- on leashes . . . including one actually wearing makeup . . . as a way to make money from tourists). 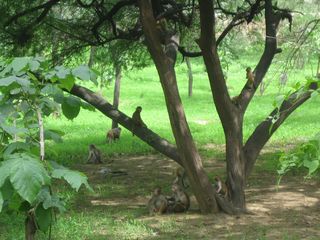 The monkeys were a bit shy until one of the locals held out a corn cob . . . which got the bigger "alpha male" (not pictured) to come running, looking a bit ominous (I quickly retreated to the safety of the car). 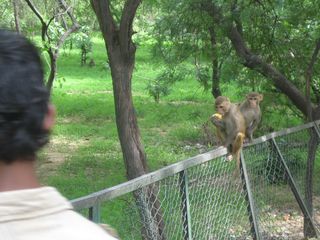 It was easy to pass on the Delhi sights because we knew that on Saturday we'd be visiting one of the Wonders of the World:  the Taj Mahal!  This involved an early morning start for the 3 hour drive to Agra . . . in order to beat the crowds.  Along the way, we stopped at a dodgy Dabba (translation: "truck stop") catering to tourists for a quick breakfast.

From the first view, the Taj is stunning! 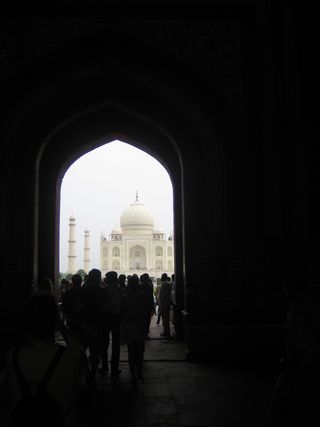 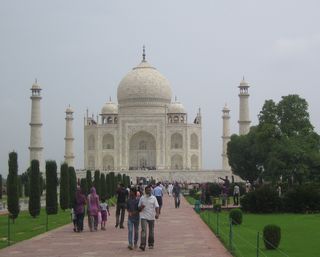 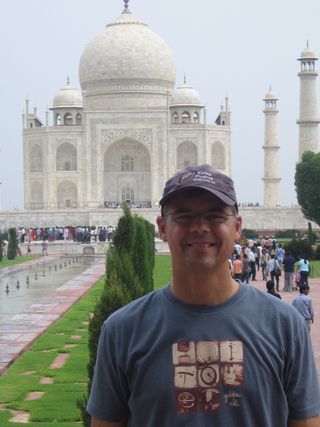 What isn't immediately obvious from the familiar distance profile we've all seen in photos is the intricate workmanship involving carved marble and elaborate inlaid stone (going in one-inch deep). 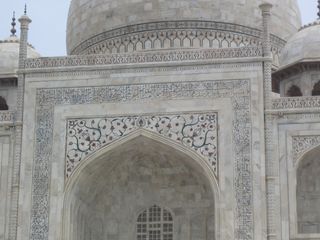 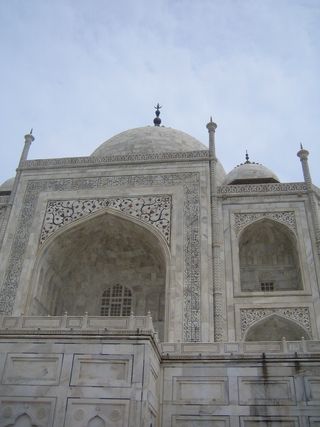 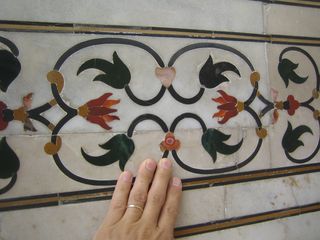 It took 22 years to build . . . incorporating 1,000 elephants to haul the marble over hundreds of miles.  An army of workers . . . (reminds me of the "despair" poster that states "there's no limit to what can be acieved with an endless supply of expendable labor").

Exquisite detail, symmetry, sensory overload -- an incredible site and accessible to the point of being able to touch it!  Simply over the top! 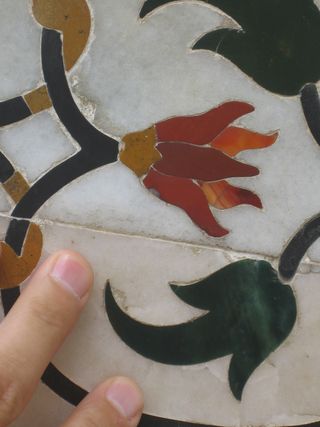 Despite being tired and HOT, we stopped at one more fort across the river for a quick tour before leaving the area. 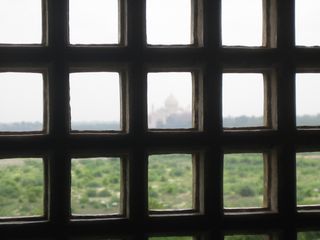 I was particularly inspired by the arches. 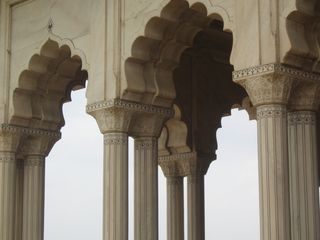 Then, a bit of surprise shopping (the guides get some "consideration" for bringing tourists to their shops), lunch at a resturant disconcertingly called "Indiana" (with a snake charmer in the parking lot, even!), and then a long drive back to Delhi (almost 5 hours now that traffic was at its normal level). 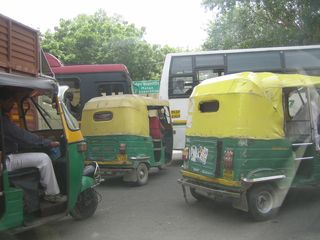 Impressions:  Incredible sights.  A long day.  A really tough drive - especially on the way back - featuring multiple near-miss collisions, massive potholes, and an incident of road rage in which a motorcyclist threatened to hit our car with a bamboo pole.  (Our driver was aggressive ... and "safe" in that he looked out for us, but not necessarily for those around us.)  Back at the hotel, the adventures sent me running (not walking!) for my Cipro to quell the freshet of recently acquired GI diversity (my guess is . . . a result of the Dabba!).  Overall, very worth the rigors endured to get there; no regrets!  But, like running the Boston Marathon or hiking Longs Peak, not something I ever need to do again.

At least. . . not for me.  I'd definitely take Kym there, should she ever decide to travel to India!

A friends daughter just returned from India and she felt the same way about the trip to the Taj Mahal. It is inspiring to see and I thank you for sharing its beauty with us. Good work, Tom!

Thanks for sharing the trip Tom~ I would have run from the monkey too!

Oh the wonders of this world of ours.

Thanks for sharing Tom.

It looks pretty amazing and I appreciate seeing the close ups of the stone work. I'm glad you're home, Tom, and should you ever decide to come run that Boston Marathon, well, you've got a place to stay with me! (You have to bring, Kym, though, I'd insist on it!)

Even the road rage incident sounds exotic. I mean, when do you ever get threatened with bamboo poles in the United States? The Taj Mahal is beautiful, and you took some really awesome pictures, Dad.

Wonderful architecture...and so very different from what Kym just saw in Scandinavia!
Was the haze in the pictures from humidity or smog? Or maybe both...?
Thanks, Tom, for the tour. :D

My employer has a large operation (5,000+ employees) in Hyderabad, so a number of my colleagues have done a 6+ week (up to 2 years) rotation there. Exotic is right.

Such an amazing part of the world. I hope you get to take our Kym soon. Just remember to pack plenty of Cipro! ;^)

Aw, I love that last paragraph. ;)

What a fun tour -- and great guest blogging!

three things. 1. kudos to YOU for getting Tom to write. 2. we read beneath a marble sky - fiction yes, but still, about building the taj majal, in bookclub this past spring. fascinating. 3. I'm glad marc visits asia...because I really have no desire to visit it (for reals, you know. up close?)