Waiting for this Moment to Arise 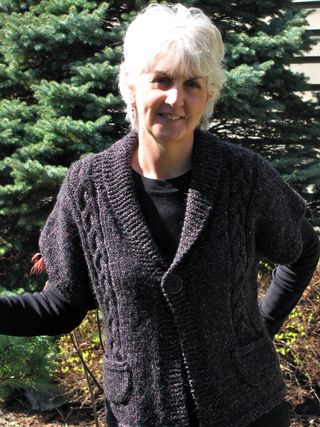 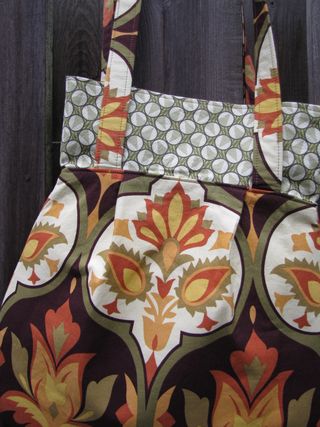 It was a squeaker!  The final score was 27-25.  Although Black Cardi was on the board first and held the early lead, Tote Bag just kept charging!  Black Cardi, however, scored at the final buzzer to take it all in this season's March Madness!

If you'd like more details on the Black Cardi (named for my favorite Beatles song), you can click here for all the yarny-knitty details on Ravelry.

As for the Tote Bag, it is the Frenchy Bag pattern from Amy Butler.  As usual, the Amy Butler pattern is fabulously detailed and well-written.  This bag is pretty straightforward and, with the exception of one or two tricky-bits, would be very do-able for an advanced-beginner sewer.  I made the bag as a birthday gift for my friend, Sandie, and I'm pleased to say she loves it!  (There is a little glitch in one of the lining seams -- a tiny little pucker I chose to ignore.  It haunts me still.  I can see Miss Helzer, eye-brow raised in That Way, wordlessly handing me a seam ripper.)

CONGRATULATIONS to Sheri, who was the big winner in my random drawing of all March Madness voters.  I'll be sending Sheri an exciting March Madness prize package.  (Just for the record, Sheri popped over to vote after reading Mary's blog.  Thanks, Mary!  And . . . she voted for the Tote Bag!)

CONGRATULATIONS, also, to three March Madness "runners-up" (because you can't have a March Madness contest without having a "Final Four" line-up!):  Carole, Elaine, and Sara.  A little prize will also be on the way to each of you.

THANKS TO ALL OF YOU for playing along with my March Madness fun!

Posted at 07:45 AM in Knits & Purls, March Madness, Soundtrack of My Life, Stitches | Permalink | Comments (7)

Never quite made it to the voting, but happy to see the winner! That sweater looks great on you... that's quite a list of "fixes" on your Ravelry page. FTW for the knitting gymnastics in addition to the madness!
; )

Nothing like a buzzer beater during March Madness! Have a great weekend and congrats to the winners!

Yay for the Blackbird! I really like the tote bag though...
I totally understand why you let the pucker stay...I really dislike seam rippers.
Have a wonderful Easter!

Thank you so much! How exciting. And thank you to Mere', who sent me here. I'll be a regular reader now.
Sheri in SE GA

I'm thrilled to be one of your winners!

I love the cardigan and the bag but the sweater deserved to be the big winner for sure! I'm so glad I won!!

Congrats to the winners! It was tough to pick between those two great projects.