I'm not a basketball fan.   But I do catch the whole March Madness thing . . . 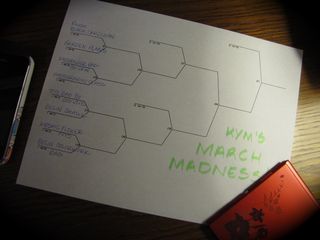 just not the college basketball kind!

During March, I get caught up in my own March Madness:  A need to spruce things up -- not just around the house, but in the project queue as well.  So I've put together a little bracket for myself.  My own little March Madness "competition"!  Let's see which project(s) make(s) it through this month. . . to be crowned. . . Kym's March Project Champ!  (My "Elite Eight" is listed above, in the brackets.  Next week I'll reveal my "Final Four."  The excitement builds.)

How about you?  How do you celebrate March Madness?

I had to chuckle today when I read Carole's blog.  She will soon be celebrating her 50,000th comment!  (She'll be sending a prize to the lucky 50,000th commenter, so be sure to go . . . say something!)  As for me, I'm nearing the 5,000th comment on my blog!!!  (Which sounded so much better before I read about Carole's Ten Times More Impressive milestone!)

I don't even know if I've had 50 comments, I have never really noticed :-)

Congratulations to you and Carole! I will do my part to help. March madness has me running for cover. Thank goodness for Netflix. Doing brackets of projects never entered my mind. Good thinking!

You made me chuckle, too. 5,000 comments is awesome! I like your idea of using a bracket for your plans. I've got 4 (or is it 5?) shawls lined up to knit. Right now they are on my craft table in order of "importance" but I keep rearranging them. Hmmm, this sounds like inspiration for a blog post.

March Madness...another event by which the Delay year is measured! We do the whole bracket pool thing. But...I may finally get Downton Abbey watched while those games are on! 5000! Yay Kym!!

No March Madness at our house. Except on the years when the winter has been long and difficult then we have cabin fever madness by March! ;)
5000 comments is amazing!

Just kidding!
Congratulations to you on 5,000 comments!
Oh, so many patterns and so many plants to think about!

Love your March Madness idea. I'm going to go make one of my own!

LOVE your take on March Madness! of course I want all 8 of those teams to win...so it will be fine no matter how it turns out. can't wait to see the Final Four!! (and congrats on all those comments! I don't have any idea how many comments I've collected...wonder if Blogger does?!)

(Though I should consider adopting YOUR March Madness as well. I have a few tasks that have been, ummmm, lacking attention... Perhaps a little competition could invigorate the list and lead to a fine finish!)

Congrats on the upcoming 5,000 comments!

I for a change try to concentrate on one project from start to end! I don't think it will hold for too long though with all those temptations everywhere, than I may need to adopt your lovely idea!

5,000 comments is nothing to sneeze at. I love your March Madness!