Stepping Away from the Edge
Home Archives Profile Subscribe
Right Plant, Right Place
Super Star . . . But He Didn't Get Far . . .

My daughter, Erin, is home for a visit this week.  (It's her spring break.)  As many of you know, she is a grad student at Carnegie Mellon University, just finishing up work for her Master's degree in English Literature and Cultural Studies. 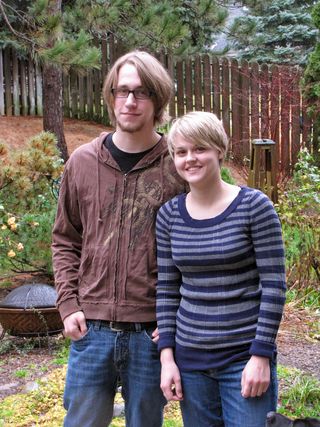 Erin is particularly interested in literature as it intersects with pop culture; or "new media."  She is frequently frustrated in her efforts . . . because the field is just emerging, really, and changing as fast as "media" does these days!   She encounters both professors and students who are not quite. . . well, ready . . . for the "new" in "new media."  Erin, though, has always (since her tiny toddler days) been incredibly perceptive to the world around her.  She is . . . On To Something . . . and she will perservere.  (Just wait.)

Anyway, she has a blog of her own, and she frequently (between tales of life in a new urban setting, the frustrations of graduate school, video game reviews, and political rants) writes of her own thoughts about this emerging field.

I thought it might be fun for her to become a "guest blogger" here on my blog today.  When I read this post of hers last week, I was quite moved.  I hope you will be, too.

I grew up with the Internet. I transitioned from cds to mp3s, from VHS to DVD. I learned to type before I learned cursive. I learned my multiplication tables from Math Blasters. I grew up with Nintendo and Microsoft and Apple and cellphones.

I was twelve years old on September 11, 2001. I remember sitting in my classroom—I believe it was pre-algebra—that morning, watching the classroom television in silence, transfixed by the image of the planes crashing into the World Trade Center. I remember not really understanding what was going on or why it was happening. I was twelve. My main concern: were there any planes coming to get me?

I watched President Bush address the nation. I watched him declare the “war on Terror.” I remember a time before Homeland Security. I followed the wars in Iraq and Afghanistan on and off as I went through middle school, high school. I watched some people I graduated with go off to war. I went to college. I cast my vote for Obama in 2008. I watched the banks collapse only to be bailed out. I studied the corporate greed. I saw it happen before my very eyes.

I follow Occupy in the news, I watch the police and the politicians try desperately to stop the most deadly force: a group of people who have seen the world collapse...and not seen anyone trying to fix it.

I study new media and culture. I bash my ideas against a wall of resistance. The professor doesn't understand that there is no difference between a book and an eBook. It's what is written that matters. I think they're afraid of me and my ideas. Because they know when I was born.

And I’m not going away.

Please don't go away. You're sure to make your parents proud and guide baby boomers like me into the future!

Brilliant post. I've never heard the term Millennial before. I'm a GenXer and have lived through and adapted to the changes in media, etc. I've also encountered profs who were resistant to change as I made my way through university and grad school. I think that it's something that most of us who studied in the latter half of the twentieth century have experienced. Our world is incredibly dynamic, and unfortunately, higher education, or those teaching it, can't, or won't, keep up. Luckily, there are those like you who challenge and will eventually effect change. You may not benefit from those changes, but those who come after you will. Keep up the good work!

Wow! No wonder you are so proud of her! And I am grateful for Erin and her peers and don't want them to go away at all. Hannah and I had an interesting conversation yesterday about feminism and it's place in the lives of today's young women. I wasn't thrilled with some of her ideas but I accept that her generation looks at this differently than mine.

I am very happy to see someone your age
being involved and not accepting everything with the bad excuse of: I can't change it anyway so why bother - I heard this from quite a few people of your age group.

Isn't it fun, thrilling, amazing to watch our children grow up and develop their own interests and thoughts and follow through on them?
Go Erin! And way to go, Kym, also!

Thank goodness someone will be there to ask the questions and stand up for what is right! Go Erin.
Kym, you did a great job!

These kids who are our future -- the future -- give me hope.

You have every right to be proud. Go, Erin!

The next generation is in good hands if the rest of the students share your philosophy on life! Maybe your future lies in Academia. I remember the best nursing professors were the ones that still worked in the field. They had a good grasp of what nursing was really like.