Stepping Away from the Edge
Home Archives Profile Subscribe
Another Slice
Close Encounters. . . of the Eiffel Kind

I watched the Oscars last Sunday night (the Red Carpet show, too!).  Usually, when I watch the Academy Awards, I fade in and out and get a bit bored.  But this year (thanks to my current state of mind, I'm pretty sure) I gave it my full attention.  I didn't even knit.  (Yeah.  Definitely my current state of mind.)  Tom watched with me.  (And that pretty much never happens.)

What was it about this year that captured our attention?  This week's Ten on Tuesday topic helps me figure that out . . . Here are Ten Thoughts on This Year's Oscars: 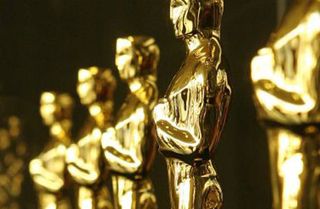 And, really.  That's what the Oscars are all about . . . seeing stars!

(Oh, and I guess this is Number 11.  Did anyone else think Angelina Jolie looked like she might perish from hunger?  Right there on the stage?  I think she had to stick her leg out like that for balance.  So she wouldn't collapse.)

I enjoyed your comments, but we didn't watch, didn't see the movies and for the first time ever, don't care about any of it.

We didn't watch but after reading 3 or 4 "Ten on Tuesdays" I feel like I know what went on...
And I've looked at the dresses online. Even I can't skip the dresses! :)

Great list Kym! I don't watch the Oscars (haven't for years) although I am enjoying reading everyone's different perspectives. Glad you enjoyed them. There are classy people in Hollywood ... you just don't see them too often.

I loved the moment when the awardee struck an Angelina Jolie pose in his tux. I'm not sure his fellow recipients knew what he was doing, but I found his camp hilarious!

Your list is wonderful and I agree with you on every single point! Well, except for Emma Stone's dress. Meh.

Kym - I'm with you on Emma Stone's skit but I didn't really care for the dress! I did like Michelle Williams red number though! Great show this year.

I like the red carpet and all the wrap-up coverage - yours included! I have dvr'd the cirque scene and hope to watch it soon. katie said it was great, too.

You are not the only one to notice Angelina Jolie's anorexic/buliemic shape:
http://blackbird17.blogspot.com/2012/02/my-thoughts-on-oscar-gowns.html