When I was in third grade, I was very excited to go on a field trip to the Tinker Swiss Cottage Museum (Rockford, Illinois).  For nine-year-old me, the Tinker Cottage sounded like The Coolest Place Ever!  I couldn't wait to see architectural wonders I'd only read about in books:  spiral staircases!  chandeliers!  bookshelves with hidden panels!  Definitely features unseen in my little patch of suburbia.  I was charmed.  I was delighted.  I was excited. 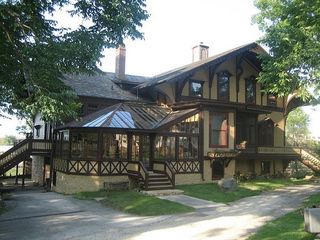 Anyway.  On the night before the field trip, at the dinner table, I was describing (with giddy anticipation) all the wonderments I would see at the Tinker Cottage.  My Dad (who had also grown up in Rockford and was, thus, An Authority) told me to "watch out for The Tinkers."

He explained that The Tinkers lived in the cottage and worked behind the walls and in the closets and other dark hiding places.  And that they . . . tinkered with things.  You know, keeping things working at the cottage and such.  He told me that they were small in stature, but that I'd know them when I saw them. . . because The Tinkers had one small hand and one BIG hand (to better "tinker," I guess).

Now, I didn't believe him for a minute.

We all laugh about The Tinkers to this day.

Last year, toward the end of the winter, I made this mitten: 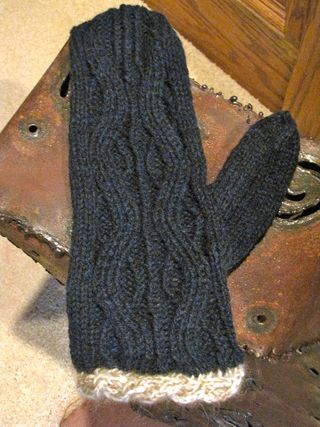 It's a nice mitten, made from really nice yarn.  (Ravelry details here.)  It was slightly biggish, and kind of a pain in the butt to knit (I never could get the rhythm of the pattern in my head), but . . . I liked it.  The weather was warming up by the time I finished the mitten, though.  It was closer to those fickle days of spring, so I just let it hibernate . . . until now.

So, a couple of weeks ago, I brought this mitten out of hibernation to knit mitten #2.  In a brilliant fit of organization, I had actually packaged the finished mitten, the already-knit cuff, the pattern, and the yarn into one neat little project bag.  All I had to do was dig it out, grab the needles and get to the knitting!

The pattern called for #6 needles.  I grabbed my batch of size 6 double points. . . 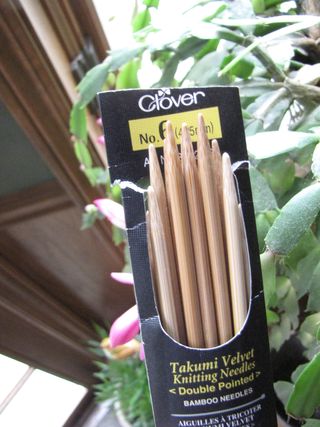 This time, the mitten seemed to move along much quicker, and in no time at all, I was nearly finished. . . and . . . noticing that this second mitten. . . was much larger than the first.  Much larger. 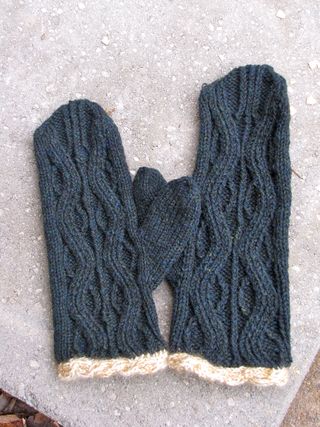 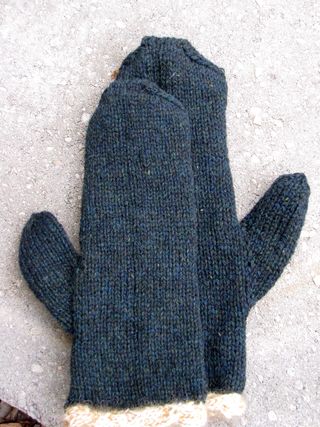 (Clearly, Knitter's Delusion had set in during the actual knitting process.)

Then, I happened to notice that one of the photos I had posted on Ravelry (from the first mitten) had pink, metal needles.  I hate using those needles, and for the second mitten, I drew from my collection of bamboo needles.  I went back and checked them out.  Turns out that although ALL of the needles are marked with a 6, several of them actually measure a 7 . . . and at least one measures an 8.  I'm not sure which group of needles I used for this project --- but, clearly, some (if not all) were NOT size 6 needles.

And what to do?

In the end, I decided I didn't WANT to knit the pattern again.  It's a lovely mitten and all. . . but when it comes right down to it, I didn't enjoy knitting it all that much.  (And even the first mitten is too large to be completely comfortable in the wearing.)

So I tried to shrink it.

Now, both mittens are roughly the same size.  But one looks sort of felted.  And one does not.

At this point, I'm just going to let it go.  Consider this to be . . . one of those projects that just didn't work out well.   And call it a day.

(I'll leave them out, though.  For The Tinkers.)

Tinker mittens!
I've got needles that aren't what they say they are too. Very frustrating.

Not to be, not to be. The tinkers will love them. Se la vie.

Sometimes we have projects that just fail, it happens to all of us. I think you should get extra credit for posting about it and admitting your defeat. I think I was going to knit a pair of these myself at one point but I never got around to it.

Love this post! It's so easy to get caught up in all the "perfect" projects out there on Ravelry and blogs and then feel less when it comes to our own efforts. Rarely do folks share the good-the bad and the ugly equally. Thank you for keeping it real!

We all have those projects! The victory is in knowing when to let it go...

saw the title, saw the photos, thought you were going to "tink"... silly me! I like your solution much better!!