I have long been a fan of Kate Atkinson's novels, but I was a little bit leary of the new PBS Masterpiece Mystery series, Case Histories, which is based on the first three of her "Jackson Brodie" books.  I'm generally disappointed when books I love are made into movies.  Especially when I have a strong image in mind for the characters, or when the stories are more emotionally complicated than action-packed.

But then I saw this.

And decided to give the series a try.  Because the actor Jason Issacs (who was apparently Lucius Malfoy in the Harry Potter movies) matches up with the Jackson Brodie in my mind ... just fine.   (Just fine, indeed!)

Anyway, I watched Episode 1 last night on my iPad.  It was very good, actually.  I'll definitely watch the rest of the series.

And, speaking of books, I just need to say that Nina Sankovitch's Tolstoy and the Purple Chair is fabulous.  Simply fabulous! 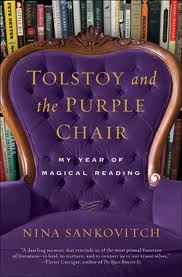 It is a reader's memoir, relaying the discoveries of Nina's own "year of magical reading" and demonstrating the sheer power of words to heal and comfort and ground us.  Very worth a read -- especially if you like books.  (And, trust me, you'll boost your own personal reading queue by. . . oh, about 365 book titles or so!)

And one more thing.

Can any of you explain what I'm missing with Joyce Carol Oates?

I've just read another book by Joyce Carol Oates.  (My fourth.)  I know that she is considered a "must-read" author.   She's prolific (having written over 50 novels!).  She's won many literary awards -- and been nominated for even more.  She's always mentioned as a "favorite" to win the Nobel Prize for Literature.  And she's "discovered" and encouraged many young and up-and-coming authors (like Jonathan Safran Foer).

There's just something about her style that doesn't resonate with me.  And her characters?  Well. . . I never seem to connect with any of them.   In the book I finished last night (American Appetites), I actually did a little celebratory dance when one of the characters died mid-way through the book. . . because then I wouldn't have to listen to her whine anymore!

But no worries.  There are plenty of other books to read!

Good Morning! I remember reading She's Come Undone and by the end of the book just yelling at her - COME ON! Started one JCO book and couldn't do it so you're not alone in the not getting it!

How did you know that I needed reading suggestions?? I just finished a book and can't decide which one to read next! Will be looking at these for sure. I'm with you..if there is an author that I don't like even if they are supposed to be "important" I say skip them!

I have quite a few masterpieces I never read. I say, read what makes you happy!

Oh and he agrees with me too, very much so,,,

So I just heard through the grad school grapevine (which is surprisingly extensive and loves namedropping) that Joyce Carol Oates is extremely overrated. I'm pretty sure my contemporary novels professor (you know, the one who's the vampire) hates her. You are not alone!

Case Histories is waiting at the library for me. Was it you who recommended it? Now I cannot wait! Just requested Tolstoy and the Purple Chair; thanks for the reccy.

I listened to one JCO book, The Falls, and liked it okay. Tried another that I don't remember and lost interest. As others have said, life is too short to read bad books.

Thanks for the recommendation on the Tolstoy and the Purple Chair book - that sounds great. Joyce Carol Oates is kind of overrated, I think. Her stuff hardly ever gets checked out of the library but we feel obligated to keep it because, well, I guess just because she's Joyce Carol Oates. Some authors are like that.

I am with you on Joyce Carol Oates.
For me, reading a book by her is like eating oatmeal every meal for a week, without any toppings.

Gave up Joyce years ago. It only took two of her books before I said "never again".
Case Histories was good and I was surprised, too. Can't wait for the next one!

I'm with you on JCO. (I loved the imagery of a "happy dance" at the death of a character... NO MORE WHINING!)

My 12-year-old son's advice on reading bad books (oops, I mean "books you don't care for"): "Miss G says if you don't like it, read something else." How great is it to have a practical-minded, understanding reading teacher! (The entire class ditched "Tuck Everlasting" in the middle of the curriculum---I was reading along and totally on board with that!) I'm 50 years old and I've only recently given myself permission to stop reading a book I don't like. Go figure!

I don't get her either. I'm starting to think people just say they like her so they don't have to admit that they don't.

I watched Case Histories Sunday afternoon and I need to watch it again to figure out what I think. :?

Thanks for justifying for me why I have never wanted to read Joyce Carol Oates. You did all the work for me. Now go read what you really like! And whoever described it as "oatmeal" is probably a much better writer than Oates is (even though I l love oatmeal - but that's probably because since I eat it for breakfast I can look forward to a lot more fun with my other meals).

I too found Jason Isaac's Jackson Brodie very appealing -- what a good actor he must be (besides looking great sans shirt) to be so appealing in this character and so horrid as Lucius Malfoy!

As to JCO, I think she's a talented author, I just don't much care for her stuff. I stopped in the middle of one of her stories years ago because it was just too ugly. But to be honest, I wish I hadn't -- some mental pictures from that book are still with me -- and perhaps if I'd read to the end, and some resolution, they'd be gone.

I'm currently reading a new Laura Lippman -- have you read her?