Socks With a Purpose

Yes.  Another sock post featuring socks from long ago . . . to divert your attention from the fact that I'm not saying anything about the "footwear" I'm currently knitting for SocktoberFest! 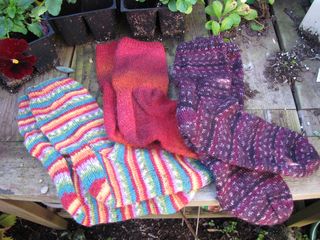 You see, I used to knit socks all the time.   Always plain-vanilla socks.  I have many pairs still in my own personal sock-rotation, but I've also knit several pairs of socks to give as gifts.  (I even knit a pair for Brian once -- which is a huge undertaking, given his size 13 feet!)

They were Socks With a Purpose! 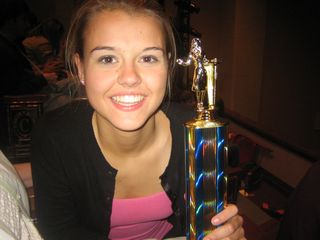 (Sorry.  Just had to stick that in there.  I didn't blog back then, and this was a Very Big Deal.)

Anyway.  Forensics is a very intense, very nerve-wracking "sport."  The season is long.  The tournaments are long.  The pressure is unbelievable (especially when you're a contender for top honors, which Erin was -- each year of high school).  And Erin liked me to "be there" with her/for her.

Forensics tournaments begin with three preliminary rounds, where all competitors participate and compete against each other (in fourteen separate public speaking events).  After those rounds, they cut to 12 semi-finalists.  After those rounds, they cut to 6 finalists.  And then you wait a long time while all the results are tabulated and winners are announced.  It takes all day.  It is very intense.  (Regional and state tournaments last even longer, with more rounds.)

Erin was always right in there - as a finalist - intense to the bitter end.

What was a mom to do?  Why. . . knit through it, of course!  Knitting got me through forensics.  (Really, I think it was the only thing that kept me sane through all those tournaments and all that stress.)

Socks were the perfect forensic-knitting (in fact, I called them my "foren-socks") because they were portable, somewhat mindless, and small.  I used to crank out a couple of pairs each forensics season.  But, then, when Erin finished with high school -- and forensics, I put away the sock knitting (mid-sock, truth be told), and I haven't picked it up again!

I'm not sure that I ever will pick it up again, actually.  I think there is just too much intensity wrapped up in knitting socks for me now.  Four years of "foren-socks" probably just did me in as far as sock-knitting goes.

Socks got me through. . . they served their purpose.  But now?  I think I'll stick with sweaters.

What a good idea to knit during that time! And congrats to Erin even if it's a few years late...she did a good job!

Those speaking skills honed in all those forensic meets will serve Erin well in life. #1 Son was in forensics, too, although nowhere near as intensely as Erin.

Erin is a cutey! It's true, socks aren't for everyone.

Forensics sounds like the perfect time for sock knitting. I do think socks are fun to knit, especially at meetings and things like that. I bet you'll get back to sock knitting some day.

socks are really the perfect portable project (yikes, sorry about all those p's!), but I agree that sweaters are more fun!

Just the perfect use for sock knitting and it served its purpose very well it seems. Good job Erin and Mom! :)

:D Awww thanks Mom. By the way, I am actually wearing a pair of those socks at the moment.

I'm a little behind here: As a Mom I hear you on the socks/intensity thing. Besides, there is so-o-o much more stuff to knit. (kinda fond of hats myself).