(Oh, Cyndi.  Even though you can't belt out those high notes anymore, you're still a lot of fun!  Great haircut, too.)

When I first signed on for Project Spectrum, I set two goals for myself.

One: I wanted to let Project Spectrum inspire me to sit at my sewing machine again.  (For the most part, it has.  Although I lost steam during PINK. . . and totally let YELLOW slide by when it came to sewing.)

Two:  I wanted to do some "big" project using all the Project Spectrum colors; something that would last through the entire 7 months. Initially, I wanted to do something with Granny Squares.  I have always been charmed by the Granny. . . and I thought it would be a fun way to play with all the colors of Project Spectrum.  But then I found this pattern -- and decided it might be fun to put round pegs in square holes. 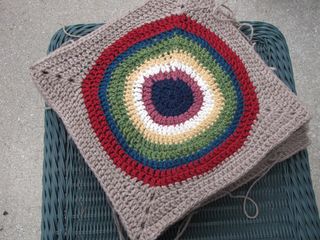 Initially, I planned to crochet a square or two every month of Project Spectrum (after all, the pattern only calls for 9 squares), then stitch it together, slap on a colorful border, and be done with it by the end of the Project -- without making a real dent in my "regular" knitting. 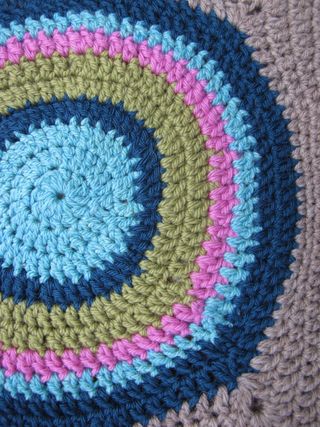 But, after completing a few, I could see that 9 squares would make for a tiny afghan!  Baby-size.  And I wanted to curl up under this one . . . for a nap; when the snow flies.  So I had to up the stakes!  I decided to make 20 squares.

I've been a crocheting FOOL lately. . . and, while my crochet skills are definitely improving. . . I'm rather sick of this project! 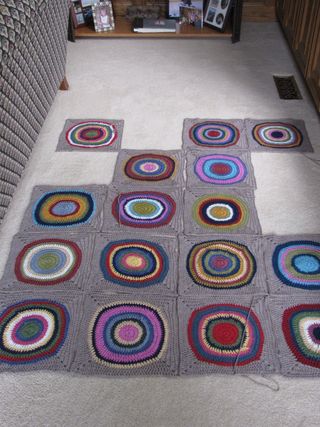 I have finished 16 squares.  (Ravelry details, such as they are, here.)  Each different; each using the Project Spectrum colors in various shades; each crocheted from stash leftovers (except for the main color -- which I needed to purchase -- because you need a LOT of it).  I blocked out the 16 (because they are very. . . odd-shaped. . . before blocking; Tom thought I was making sombreros!), and I laid them out behind my couch in the living room.

I'm trying to figure out the best way to lay them out, color-wise.  I need to make 4 more squares, but I wanted to see what the finished afghan "needs" in terms of color before carrying on.

So I keep switching things around.  Contemplating.  Considering.  (Suggestions are most welcome.) 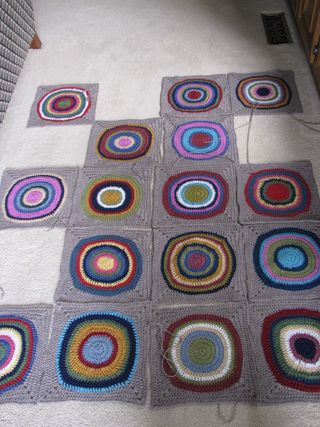 Now that the end is near, I'm finding these true colors . . . beautiful.

My suggestions...for what they are worth(!)...would be that you could use a little more of the bright blue, the hot pink or burgundy (I'm not sure of the colors exactly on my computer.), and maybe some more gold and yellow.

It's looking great! And crocheted afghans are so warm and cozy. :)

Something about the first layout I like better than the second, but what, I really can't tell. I know it's going to be so cozy come cold weather. Keep going! You won't be a bit sorry.

Love! Which ever arrangement you choose it is going to be beautiful !

That's fantastic! The main colors sets off the others very nicely. I think maybe a few more bright colors will be nice at this point - especially some yellow and green. It's going to be awesome no matter what you do, I'm sure!

I have no suggestions. I always sucked at putting the quilt blocks together.

I think I'd like to see some yellow or green that is as bright & clear as that sky blue color. Although a nice chartreuse would be interesting as well. Or orange. I like it!

Beautiful Kym! I also am clueless about additional color suggestion but the blue is spectacular! Can't wait to see the finished piece.

You look like you're on the right track to me with the lovely mix of colors: it reminds me of all the wonderful colors in the (now defunct, again) Mission Falls line. I, too, am partial to the first layout---somehow it just seems to pop more. I know you're tired of it, but I can't wait to see it done!

I know you're going to love the finished afghan (and being finished period. :-) agreeing with others about the 1st layout - I think it's having those two hot pink squares spread out more. they really pop, and encourage the squares around them to pop, too. so love the idea of another square featuring that color, and one featuring bright blue. then I suggest a little more white and a little more yellow. have fun with it!

When I was playing around with Parcheesi layouts (fewer pieces to worry about than what you have), I tried to balance the strongest colors throughout -- not have two strong squares next to each other, and trying to distribute them evenly (or pleasingly) across the rows.

I don't know if that helps. But it definitely helps to take pictures and study them -- try to identify what it is about one layout (or part of a layout) that pleases you more than another. And make up rules! I had fun making up my own rules as I went along.