Stepping Away from the Edge
Home Archives Profile Subscribe
Last Year's Garden Delight
Green . . . Any Way You Look At It

As for this year's Garden Delight? 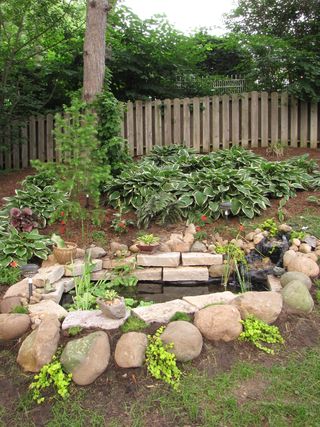 I have a new water feature (small pond) in my back yard!

I have had a really small pond for several years now -- the Puddle Pond.*  I've long wanted a bigger pond, though.  Big enough to create a pond eco-system (frogs!); deep enough to have water lilies; large enough that koi could over-winter right in the pond; and with multiple levels for growing water plants.

There were a lot of decisions that went into getting the new pond situated and ready to roll:  Placement?  Waterfall?  Power source?  And all of the "issues" with our slope (which is really perfect for a water feature . . . it just causes some logistical difficulties).  It's taken several weeks to get everything going (the weather didn't always cooperate with us, either) -- but now . . . 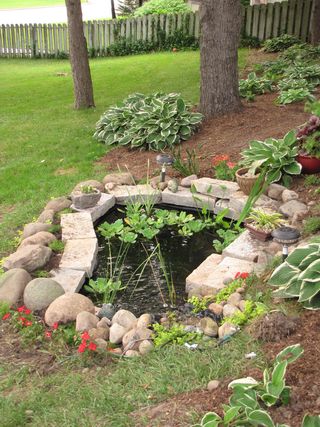 The placement ended up being just perfect.  We can see the pond from our living room window (which looks out on the garden), and we can even hear the waterfall from inside the house if the windows are open.  The pond is also in view (as much as it can be because of the slope) from the patio.  It gets just enough sun for water plants to grow -- but it's still shady enough to be a retreat from the heat.

Here are some "before" and "during" shots so you can see how the whole thing transpired. 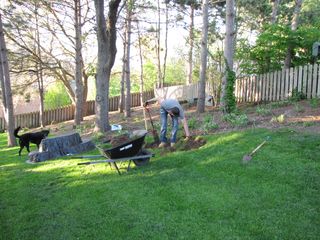 The digging is hard work.  I'm fortunate to have Tom (who loves to dig) and Brian (who loves a good workout of any type) as my landscaping crew. 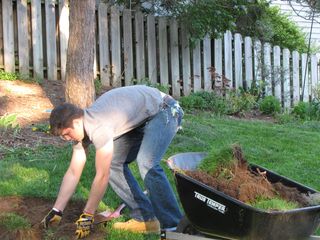 It took several digging sessions to get the pond set Just Right (from a micro-manager's perspective).  It needed to be level and needed a chance to settle.  The weather and the slope did not make this an easy task. 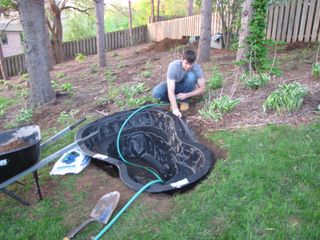 By early June, the pond had settled in. . . and we were ready to begin "landscaping" it.  At this point, my "delight" was really an "eyesore". . . but, an "eyesore" with potential! 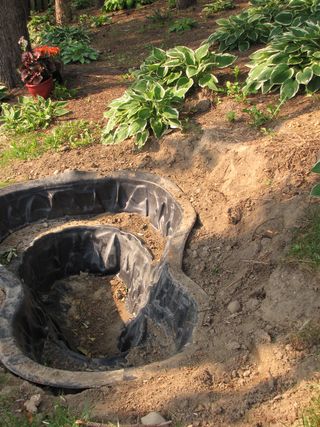 Tom and I hunted rocks when we were Up North and brought several wagon loads home with us. 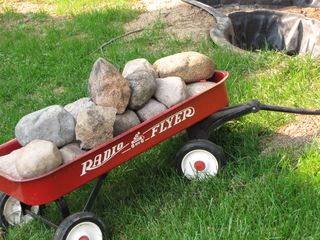 Then, Tom did a great job building a small retaining wall and setting the rocks.  (Of course, the Micro-Manager was hard at work throughout the process. . .) 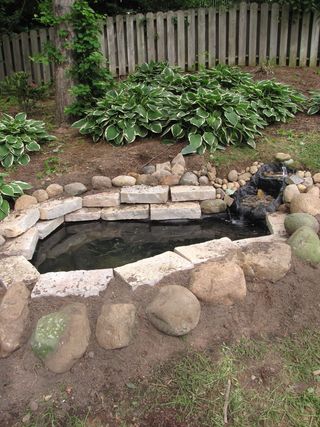 Then I jumped in with the planting. 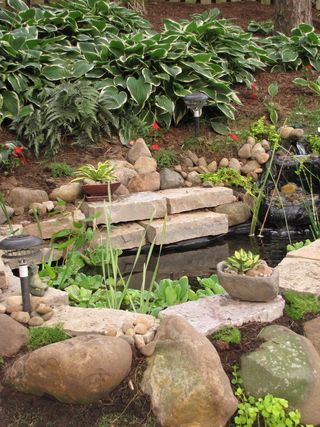 If you look closely (very closely) under the light fixture to the very left in the photo above, you can see my little "Namaste Frog." 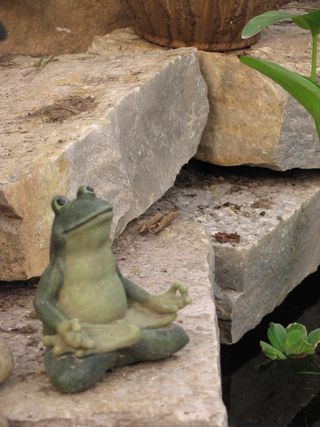 He is my reminder to relax, live in peace, and enjoy my surroundings.

We also have koi!  Now, we did have two very small koi living in the Puddle Pond.  They were a Mother's Day gift to me from Brian and our foreign exchange student, Dominik, two years ago.  The boys named them Ludacris and Boo (yep; they named them after rappers).  Sadly, Ludacris leaped to his death after only one season, but Boo is still with us -- and huge now!

Boo now has two new friends -- Simon and Garfunkel.  Look closely -- you can see all three in the photo below. 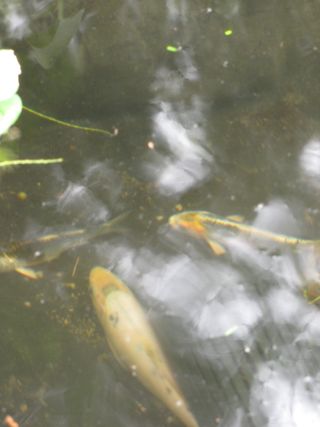 Boo is the large white fish in the center; Simon is on the right - with the orange spot on his face; and Garfunkel is on the left - difficult to spot because he is black with a silver face and doesn't stand out in this photo.

I am delighted with my new pond. 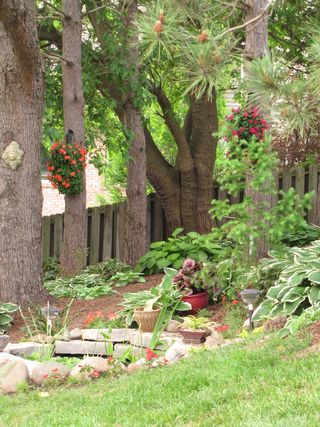 It's going to be fun to watch it grow and evolve through the gardening seasons. 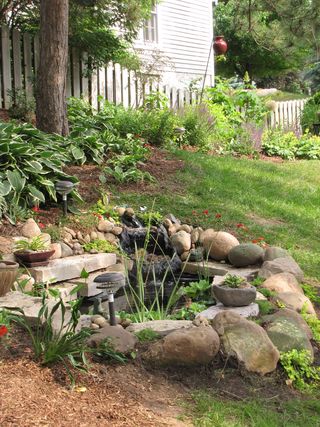 All my thanks go to Tom and Brian -- because they really made this pond happen!  Brian figured out all the logistics with the power and the pumps and the waterfall; Tom acted as general contractor and Chief Digger and Placer of Rocks.  I would never have this year's Garden Delight without them!  I love you both! XOXOXO

* The Puddle Pond got a face lift this year, too. 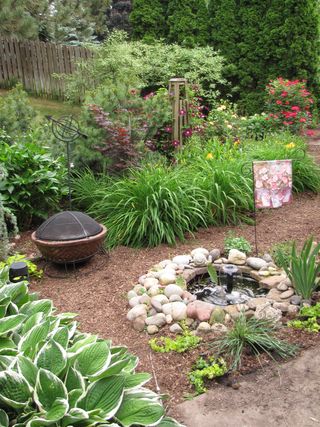 My oldest son volunteered to dig me a pond while we were still living at the farm. I never could decide where it should go in our "flat as a pancake" yard and so I never took him up on the offer. Yours is wonderful! I love it!

A labor of love! (Mom/wife love.) The pond is such a wonderful addition to your yard. You are creating a treasure of a sanctuary. I hope you share photos of how the garden grows throughout the summer.
Smith knows that micro-manager well.

Oh, how wonderful!!! It really looks so peaceful and lovely.

It makes me *SO* happy to think of Boo hanging out with Simon & Garfunkel. Crazy fun. ; )

Lovely! And I love Froggy Zen

Wow! That IS a Garden Delight!

That's fabulous! You must enjoy it so much.

Personally, I see it as Jenny managing the workers, but I may be slightly biased. ;^)

That is A Thing Of Beauty!