Stepping Away from the Edge
Home Archives Profile Subscribe
Inspiration, Pure and Simple
A Final Look At Paris

A Tale of Two Sisters 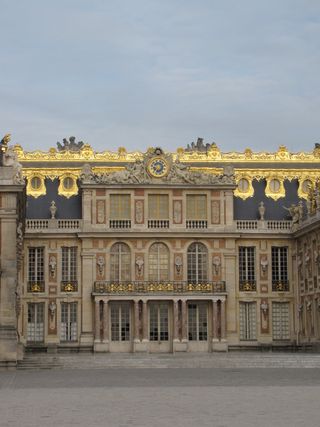 After reading many a travel guide, and hearing warning tales of hours-long lines, evil tour buses, and crowded hallways, the two sisters decided to set out Very Early in the morning.  Let me repeat. . . Very Early. 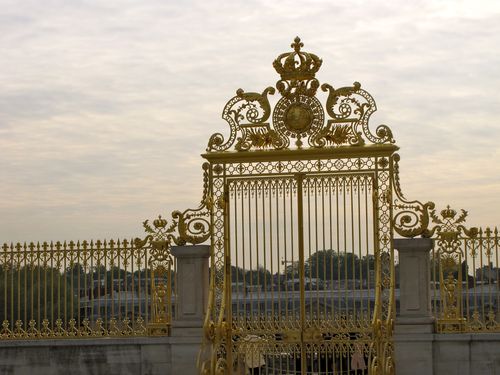 Thanks to the Intrepid Paul (van driver extraordinaire), the two beautiful sisters arrived ahead of any tour buses.  No lines!  Nearly deserted palace gates awaited their arrival! 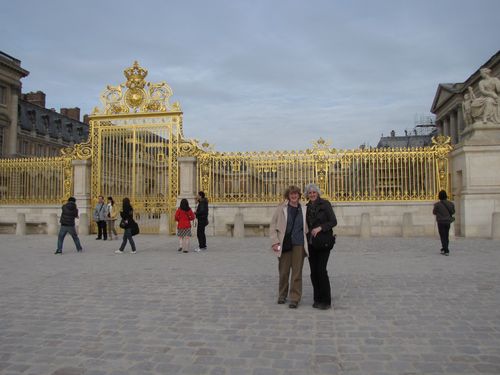 Ahead of the daily press of other tourists also seeking the Palace of Versailles, the two beautiful sisters sought out the (rare and elusive!) bathrooms and took their time obtaining the self-guided English-language audio tour headsets. 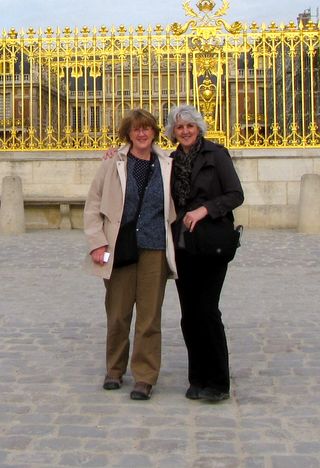 Alas.  Despite the warnings of the Intrepid Paul, the two beautiful sisters were apparently too leisurely.  By the time they had adjusted their volumes and correctly identified all of the buttons on their audio headsets, the Evil Tour Bus THRONG had arrived. . . quickly threatening to overtake the sisters. 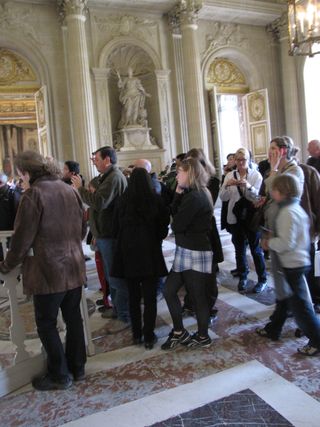 The growing press of The THRONG made the two beautiful sisters grumpy.

It gave them headaches.  It made them a little crazy.

It made them make sarcastic, irritable comments to one another.

"Look!  Another throne!  Why are they taking MORE photos of the thrones?  This must be the 751st throne they've seen this morning!  And video footage. . . what is the deal with the video footage?" complained the younger of the two beautiful sisters.

"More opulence!  More thrones!  Let's get out of here!" she added, with an edgy, near strident tone to her voice. 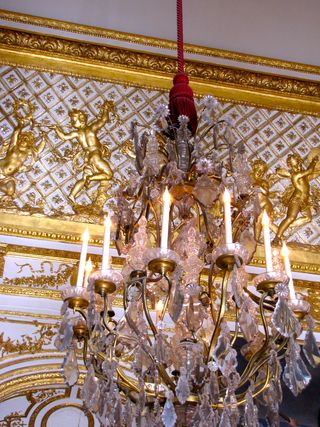 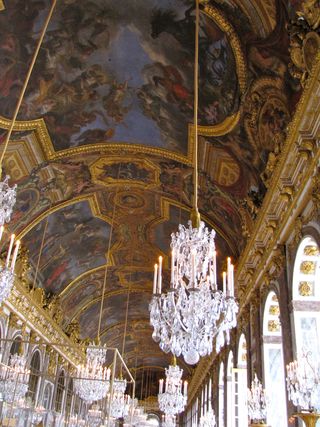 (Hall of Mirrors - with the pressing THRONG cropped out of the bottoom of the shot.)

"They're posing again.  AGAIN.  With another throne.  Get OUT!" insisted the younger sister.

Without a doubt, the two beautiful sisters had been completely overtaken by The THRONG.  The masses of tourists from the Evil Tour Buses had caught up with them; had swallowed them whole!

The two sisters were completely. . . Versailles'd Themselves! 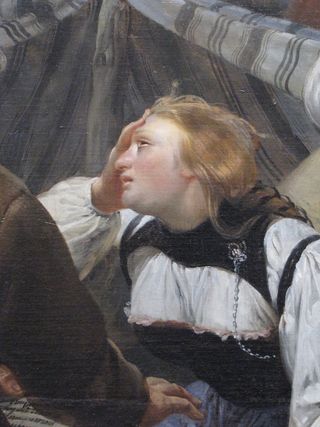 But then, suddenly - and rather unexpectedly - an empty hallway opened before them. 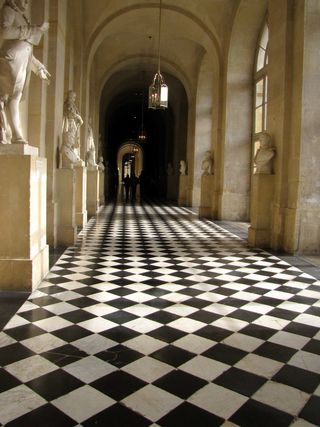 They were able to push through The THRONG . . . and escape. . . into the Gardens of Versailles. 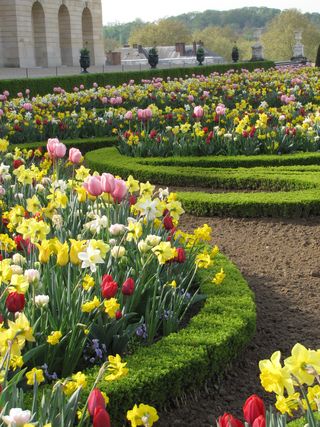 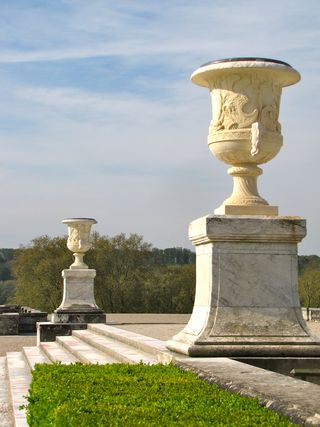 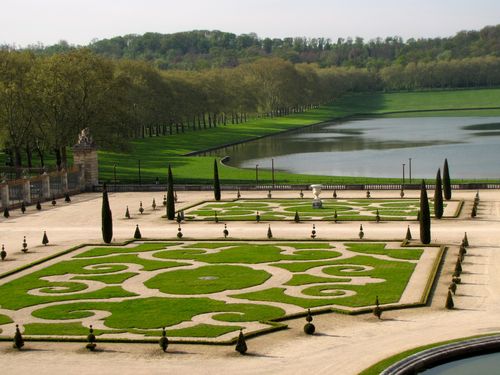 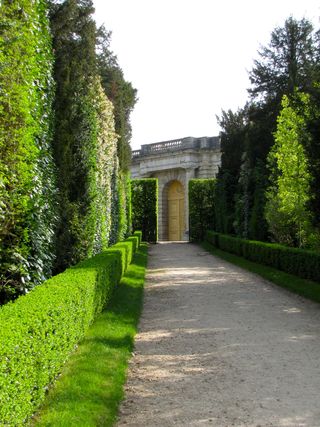 The two beautiful sisters were able to outrun the Evil Tour Groups.  They were able to enjoy the air.  Breathe deeply. 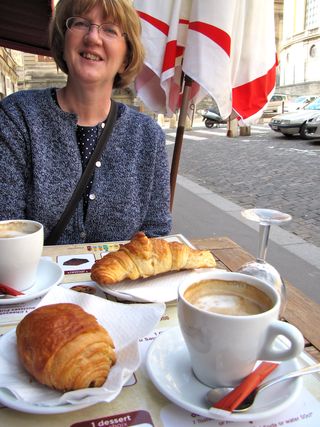 And relax with some pain au chocolat, croissants, and café crème just outside the palace gates.  The two beautiful sisters became less crazed.  They became calm and rational.  They were able to continue their adventures anew; unscathed and ready to venture forth.  Again.

Oh my goodness, how beautiful! It must have seemed MAGICAL to escape into that gorgeous (and quiet) garden! Wow.

Crowds make me grumpy too. But they must have made the garden that much more magical!

The sisters ARE beautiful BTW. :)

You are two very smart sisters.

Aren't you lucky that The Evil Throng had not yet discovered the gardens? Gorgeous. And "Versailles'd Themselves!"? Hoot!

Ya know, I was looking at your photos and thinking how I have no memory of being there. Although, I KNOW I have. Then I saw the THRONG and realized that's why I don't remember. It was one gorgeous room after another FULL OF PEOPLE. Mostly annoying Americans... you know, the ones I was traveling with. /sigh

Thanks for the wonderful take on it all.

Having just read a novel of the French Revolution (Madame Tussaud by Michelle Moran--very good), I think the Evil Throng may not have been too different from Versailles at the time of Marie Antoinette (although then there were NO public bathrooms, but lots of urns). Glad the gardens were peaceful and beautiful. Those pastries look fantastic.

It is good the gardens are there to save beautiful sisters like you! :)

The gardens are gorgeous! What a great trip this is for you!!!