Stepping Away from the Edge
Home Archives Profile Subscribe
She Said It, Week Four
Shhhhhhhhhh!

My son, Brian, is an "extra-action kid."

He has always enjoyed that "easy" place . . . where athletic ability. . meets daring. . . meets perserverence.  He walked early (9 months); he rode a 2-wheel bike early (4 years); he was a solid skateboarder by 7; I don't even remember teaching him to ski -- and he taught himself to snowboard.  He was a late-comer to ice hockey (at 9), but made up for it quickly. I learned early on to hold my breath, enjoy the excitement, and try not to panic! 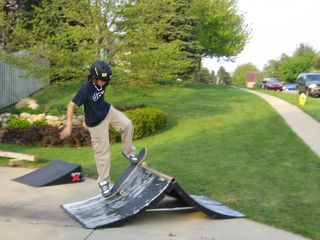 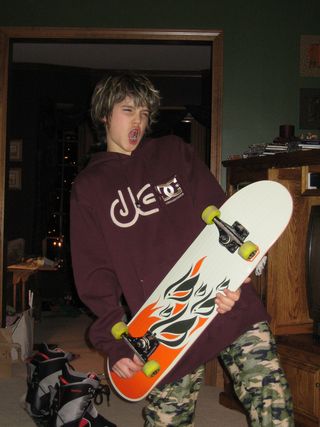 He went through a skateboarding phase.  It lasted quite a while . . . But it ended about the time he went to high school (where he busied himself with a more intense level of hockey, snowboarding, cars, and a girlfriend).  He just kind of outgrew skateboarding.

Then. . . he went to college.  And discovered . . . longboarding.  Sort of like skateboarding.  But not. 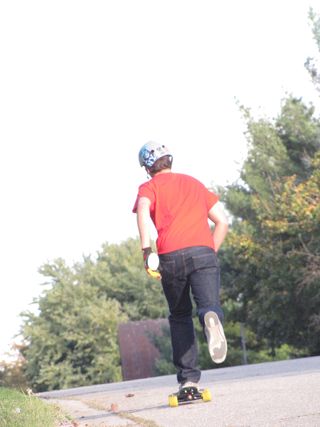 Brian just returned from a spring break trip with his buddies to California.  He is now a "sponsored" longboarder (which means he promotes equipment for deep discounts and "free stuff").

He's having a great time!  Here's a video from his "Cali trip" (Brian is the rider in the green shirt for the first half of the video, and then the white shirt/jeans for the second half).

What a fantastic video! I've never seen Longboarding. Not sure if it is the lovely track playing but it all looked very serene - and the bit at the end showing where he comes off the board demonstrates just how much skill it takes. Do the moves have specific names?

Impressive! Brian and the boys are quite good at what they do and it's entertaining to watch.

How wonderful! That kid is such a natural!

It seems like there is an extra action kid in almost every family...ours was the middle son. There were a lot of skinned knees and elbows on that one! And a couple broken bones.

You do eventually get "used" to the terror! :)

Poor you! But it seems like a lot of fun to all of you too.

Very fun! He has a great sense of balance. I think that is what our two neighbor boys try to do. They fall down a lot.

Wow, that looks like a lot of fun (if I were many, many years younger) -- he is good! The gloves must be made of cast iron ;-)