Ever since Brian was 9 years old, and played travel hockey, Tom and I spent the weekends traveling about the state (and occasionally beyond) for hockey.  From September through March; through all kinds of weather; lugging sticks and smelly gear, we drove for hockey.  Generally, I'll say it was a lot of fun.  But sometimes, our weekends were not our own.  (Make that . . . the weekends were NEVER our own.)  Although we miss seeing Brian play, we don't acutally mind closing the door on that part of our lives.

This weekend, though, we found ourselves traveling for hockey again.  Only this time, it was a little different.  This time, we headed to Hockeytown. . . for a Red Wings game! 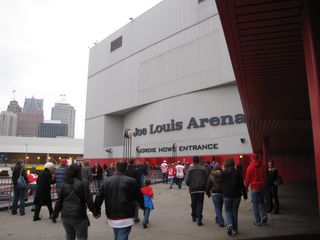 Tom has been to a Red Wings game before, but I hadn't.  (During Brian's hockey season, as he got older, we often did the divide-and-conquer weekend thing.)  It was fun to see the game played on the whole ice (so different from when you watch on TV) and to experience "The Joe" up close. 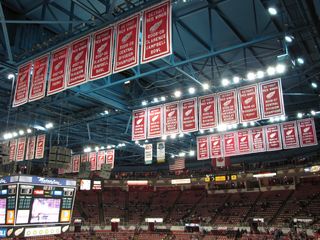 I especially liked watching the coaches prepare during warm-ups.  So intense! 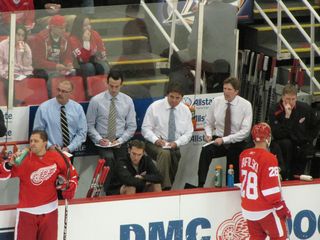 And, in the end, it was probably the best-ever game to watch live.  The Red Wings played sluggishly for two periods, and then came back in the third period with gusto.  They tied the game with 3 seconds remaining -- and then won in overtime.  Great, great hockey drama! 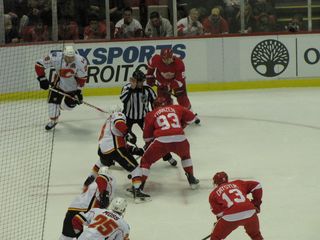 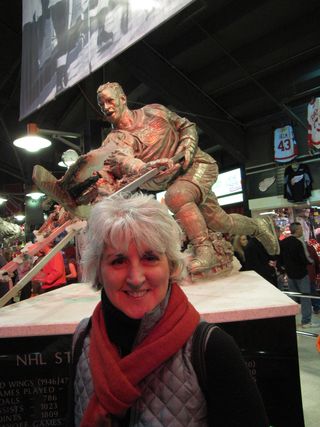 And no smelly gear in the back of the car on the way home?  A definite bonus!

If there is drama (as you saw) and fistfight's are not a constant, then hockey can be fun! It looks like you had a nice night out!

It's about time you get to enjoy a game without the smelly stuff or the extra laundry.

As a former football mom, I totally understand the smelly equipment. The worst was when the team decided not to wash their clothes because of some sort of supersition. Augh!