What if They Gave a Weather Forecast and Nobody Listened?

Weather.  It was Big News in my neck of the woods this week.  On Monday, our local forecasters began a huge Chicken Little campaign.  A "Storm Bomb" was on the way.  A storm that only happens once in a century was on the way.  A storm just like the one that sunk the Edmund Fitzgerald (which contradicts, of course, the once-in-a-century claim) was on the way.  Hurricane-gust winds!  Torrential downpours!  Straight-line winds!  Tornadoes!  Flash Flooding!  Massive power outages!  Prepare Now!  Run out - right now - and cut those dead tree limbs --- because the winds will rage with such a fury that surely your dead tree limbs will crash through your houses.  Secure all loose objects!  Take in your patio furniture!  Stock up on water!  Stock up on flashlight batteries!  Buy a generator!  Armageddon is coming!

They called it "Fall Fury."

It was windy, all right.  We've had a couple of blustery fall days.  That is all.

One of the local news rooms had FIVE weather folks in the studio to cover . . . Fall Fury.  Five.

All dressed up and no place to go! 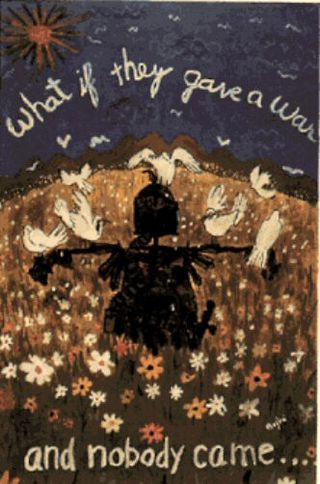 What if they gave a storm and nobody listened?

But a lot of people DO listen.  A lot of people get really stressed by these types of dire warnings.  Heck, some school districts in the area even closed anticipating . . . Fall Fury!  I think it's appalling that weather forecasters can cause so much fear and uproar with their predictions.  Sure, it's good to be prepared for storms.  REAL storms, that is.  But this "taking cover" because Dopler radar indicates there MAY be rotating clouds in YOUR AREA is getting a little ridiculous!  (I've spent unnecessary hours sheltering frightened kids in my basement as the tornado sirens are blaring because of possible cloud rotation.)

As far as I'm concerned, I'm with Sir Rannulph Fiennes . . . "There is no such thing as bad weather, only inappropriate clothing!"

I heard the barometric pressure was lower than the storm which wreck the Edmund and I heard the weather channel guy call it a storm bomb,too. He was standing on the beach which made me wonder if it really was "that bad". Overreaction is the rule of the day.

I live in Northern Illinois. Heard the same thing from our weather people. And after getting everyone in a twitter once AGAIN, the fall winds did blow and yes, with some hefty gusts, and the maples shivered and it was definitely October. And it was not the storm of the century. And the saddest part of all this -- I believed them! Whatever happened to that humble weatherman with his quick and informative prediction. That was just fine!

Love that song! And as a New Englander we also have our fair share of "HUGE STORM WARNINGS!!" Nor'easter here, nor'easter there and then we get up, clear the 3" and head off to work!

All of the news is too sensationalized and apparently the weather is joining the ranks. I wish they would go with accuracy instead of "doomsday" predictions!

We had two days of high winds, massive power outages in this part of WI and nearby MN, and lost a couple trees (in the woods, though -- plenty left). The barometric pressure (somewhere, don't know where) was the lowest, non-tropical-storm-related ever recorded in the lower 48. We lost power at the yarn shop in the middle of my knitting group and everyone had to go home. It was strange driving through dark villages and countryside. Power was fine at our house, though.

Weather dramaz. I hate that. Please tell me you called/emailed to complain. Maybe if they know how much we hate it they'll stop. Maybe?

Yeah, our weather reporters had their panties in a knot in Southern Ontario, too. DH was on the plane returning from Germany the first 'big' night, and it wasn't even windy when I set out for the airport. The next day, it blew like crazy and was a balmy 21 Celsius, 70 Fahrenheit, with sunny skies to boot. I'll take that kind of 'weather bomb' next month too, please;)

As far as I'm concerned, I'm with Sir Rannulph Fiennes . . . "There is no such thing as bad weather, only inappropriate clothing!"

I love that line! We have a few holes in the yard where the wind picked up and dropped the swing by the awning repeatedly and it was garbage day so just about everybody was on the hunt for their own blue boxes! We all survived!

Maybe they're hankering for a Michigan Hurricane season.

I think another phrase for "Fall Fury" is "high ratings."
Thank you for Gordon Lightfoot!