Stepping Away from the Edge
Home Archives Profile Subscribe
Friday Round Up: Hurried Edition
Leftovers

Definitely a soundtrack day. . . (And, yeah.  I know it's only a cover.  But it's a Metallica cover.  And Ozzy, himself, is in the crowd.  Looking pleased with it all.)

At Hope College, every fall (since 1898), the freshmen and sophomore classes compete in a tug-of-war across the Black River in Holland.  I used to hear about this and think . . . how charming!  What a nice way to build team spirit and class camaraderie.  Oh.  My naivete! 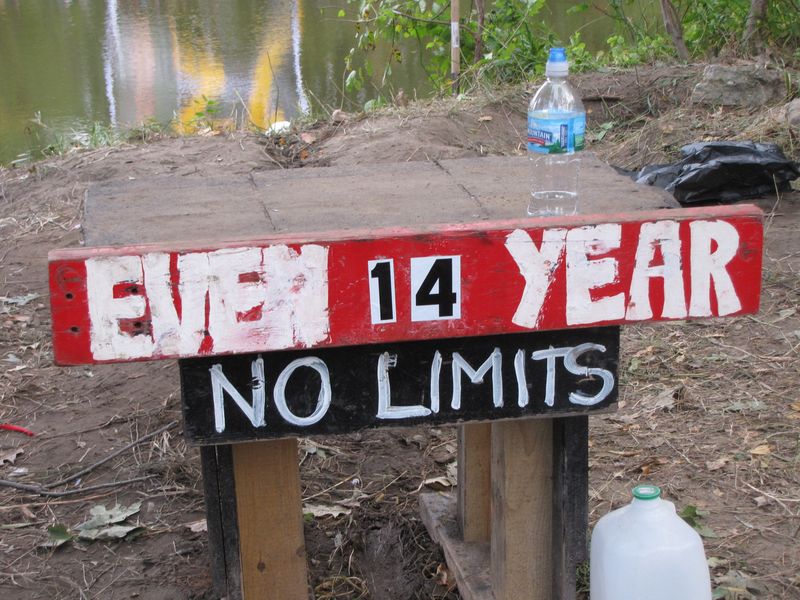 The Pull, as it is called, is no charming event!  It is a grueling challenge - physical and mental - that is steeped in tradition.  Over the 113 years of The Pull (it is the longest-running collegiate event in the country), the art and science of "pulling" have been refined . . . to create quite a spectacle! 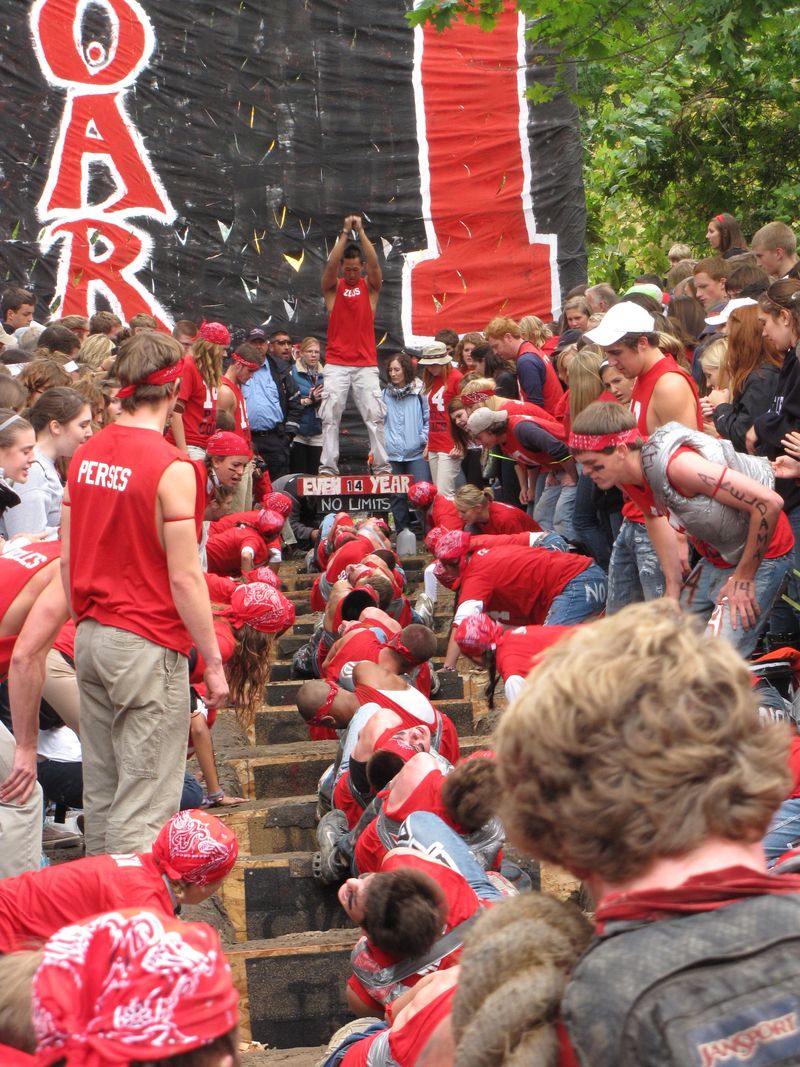 Here is this year's freshman team ("Even Years" -- based on the year of their graduation - 2014) in action last Saturday!  And my son?  Well, he's the first head of dark hair you can see up from the bottom!

Each Pull Team is made up of 18 "pullers" and 18 "moralers."  The pullers . . . pull. . . down in the pits . . . in a highly choreographed effort.  Their coach is up front (the guy standing in my photo), making strategy decisions and calling the moves.  The moralers . . . act as the "eyes" for the pullers -- because they can't see the coach or any of their fellow pullers . . . and basically, keep the pullers going. 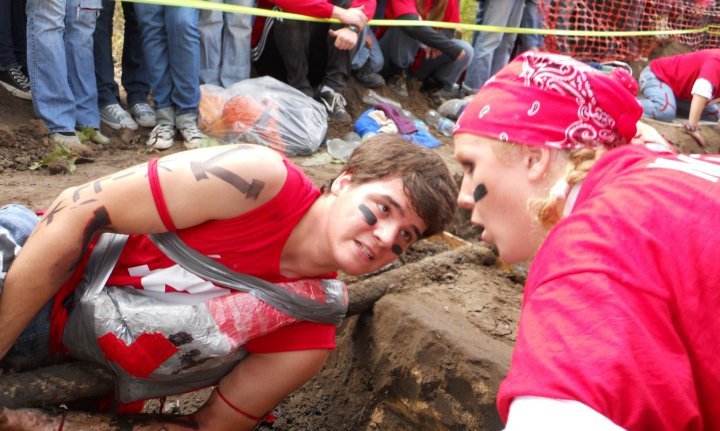 Here's Brian, looking for direction from his moraler, Christy.

And how long does this go on?  Well. . . until one team takes the rope of the other team . . . or three hours.  Whichever comes first! 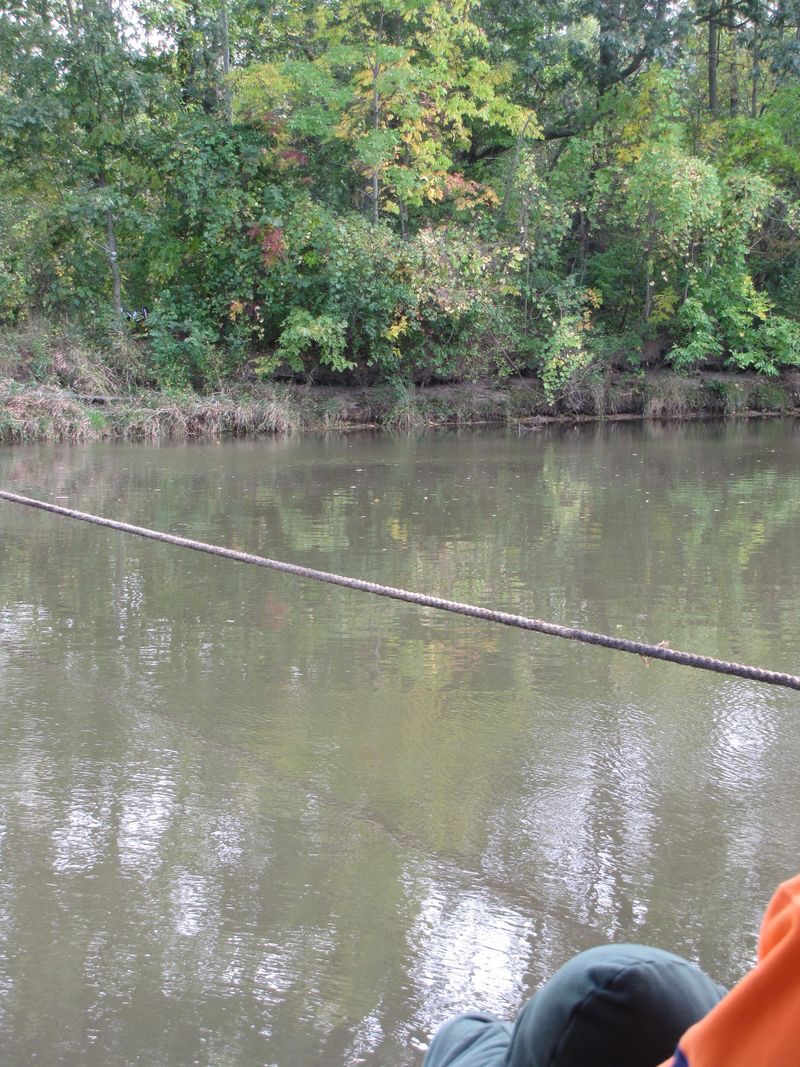 The event is steeped in tradition.  The "even years" wear red shirts and painted blue jeans and bandanas.  The girls braid their hair.  They have black paint under their eyes.  (The "odd years" wear maroon shirts and white pants!  They shave their heads and paint their faces; some have severe mohawks.  I didn't see them. . . because I was on the "even year" side of the river. . . but I have seen photos.)  Neither side wears gloves! 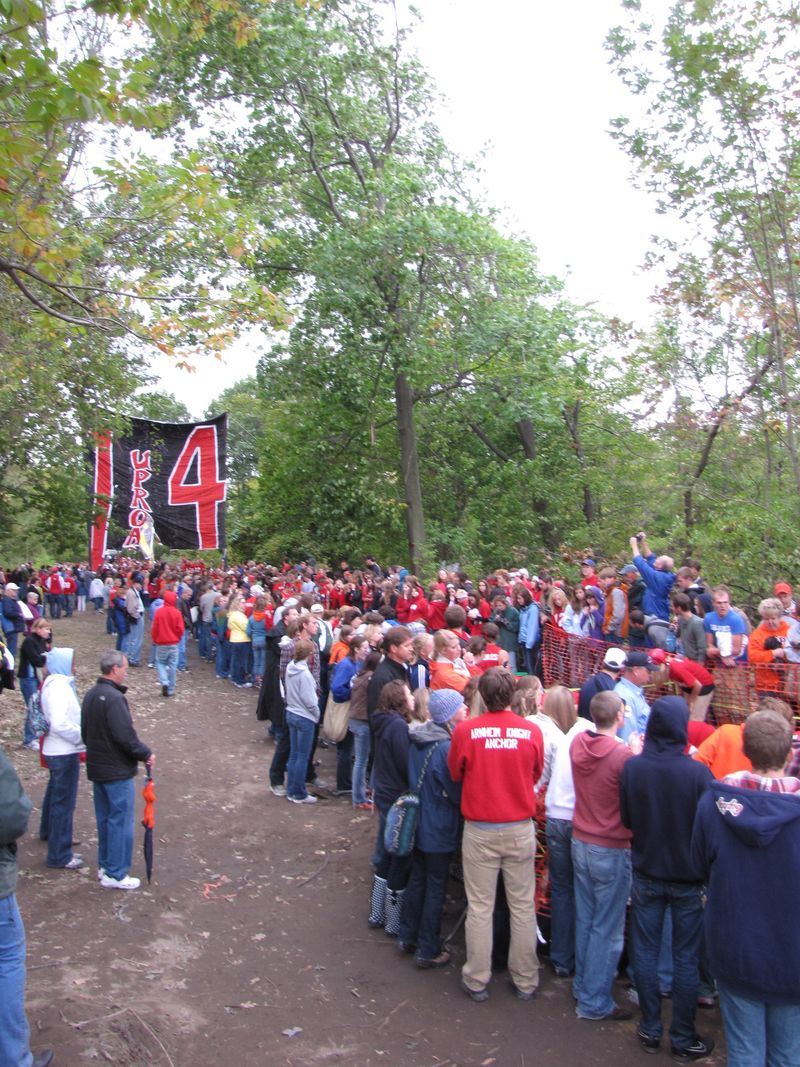 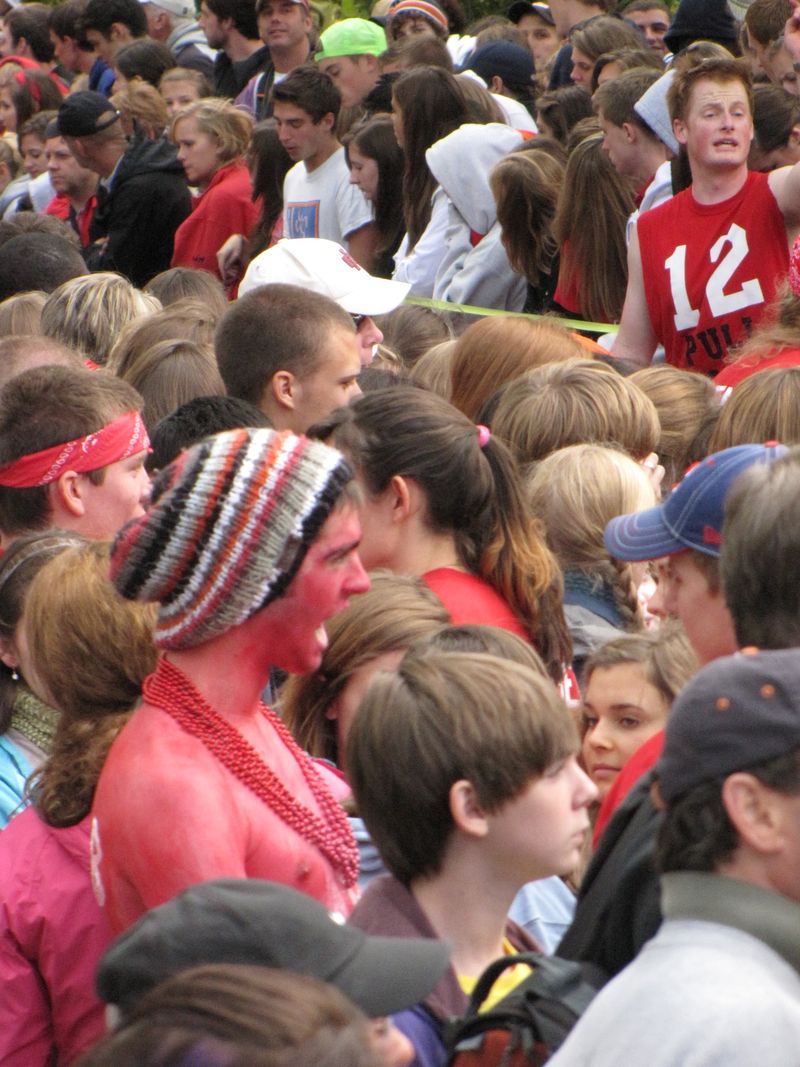 The Pull Teams practice for three weeks before the event.  Intense, grueling training for an intense grueling event!  The bond they form as a team, though, is even more intense.  Brian says he's never experienced anything like this bond before!

And the moralers?  Brian says they couldn't begin to do it without them!  The moralers do much more than "cheer" the pullers on (which was my original notion).  They are the connection between each of the pullers; they keep spirits up in the darkest moments; they encourage; they tend; they watch.  It's also incredibly intense -- and they train alongside the pullers for the event. 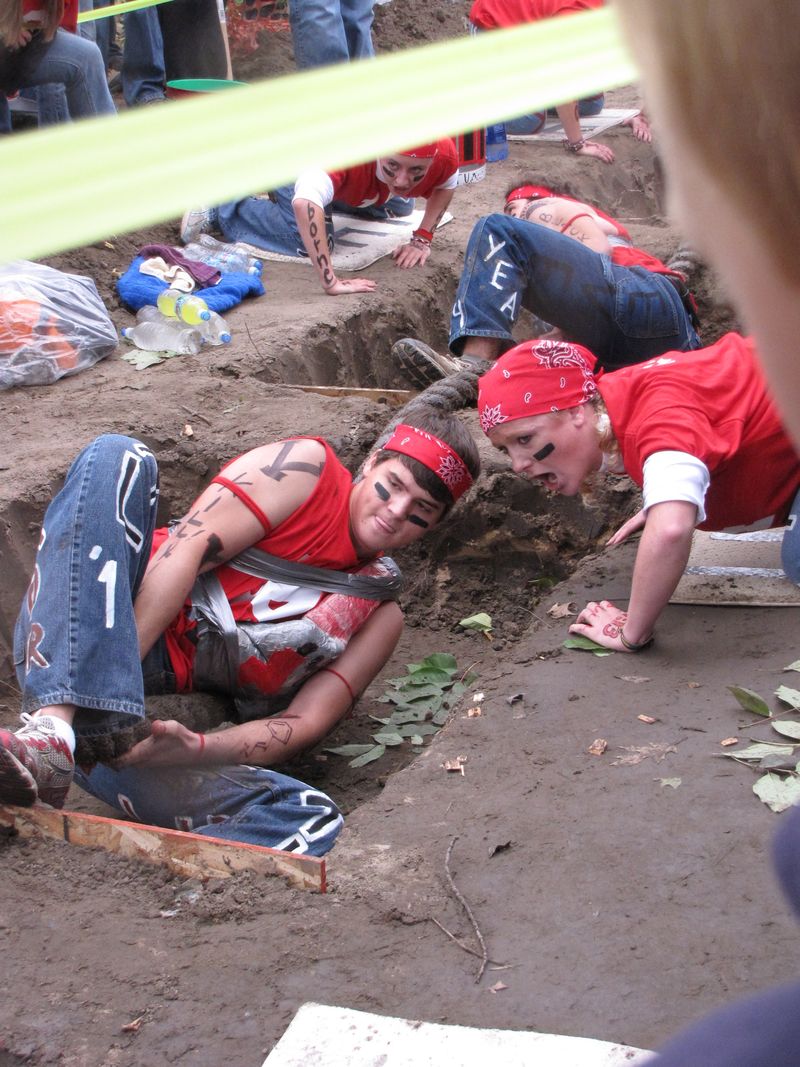 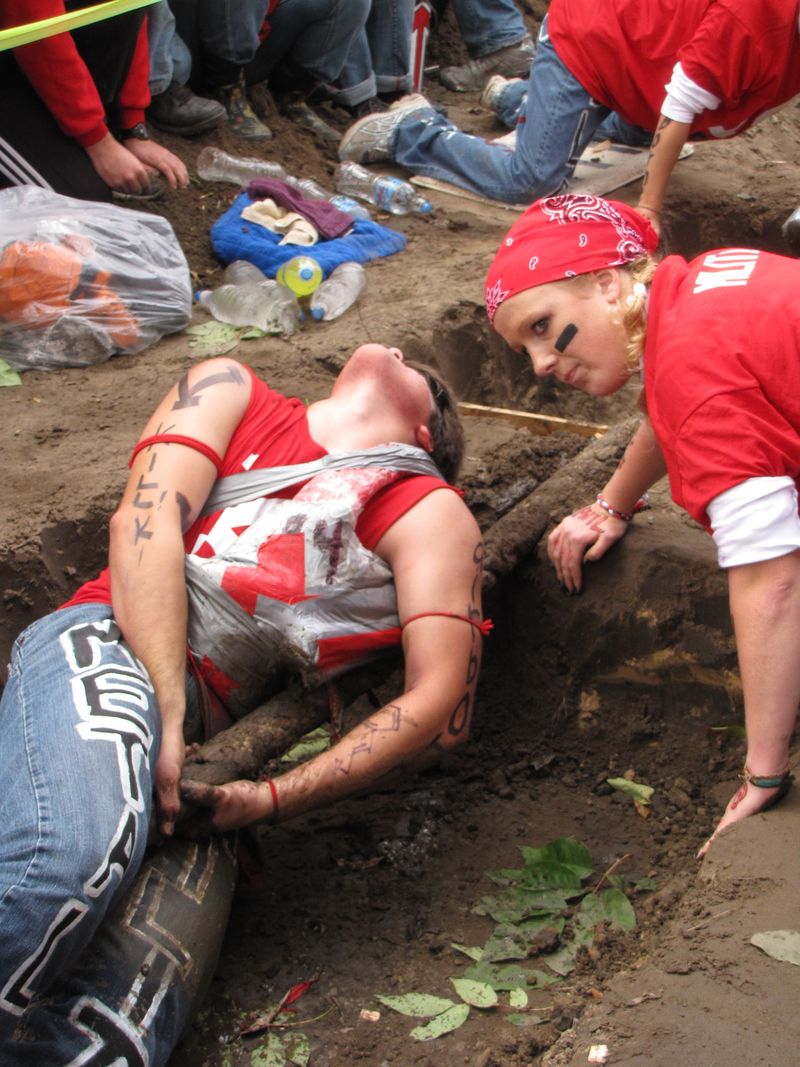 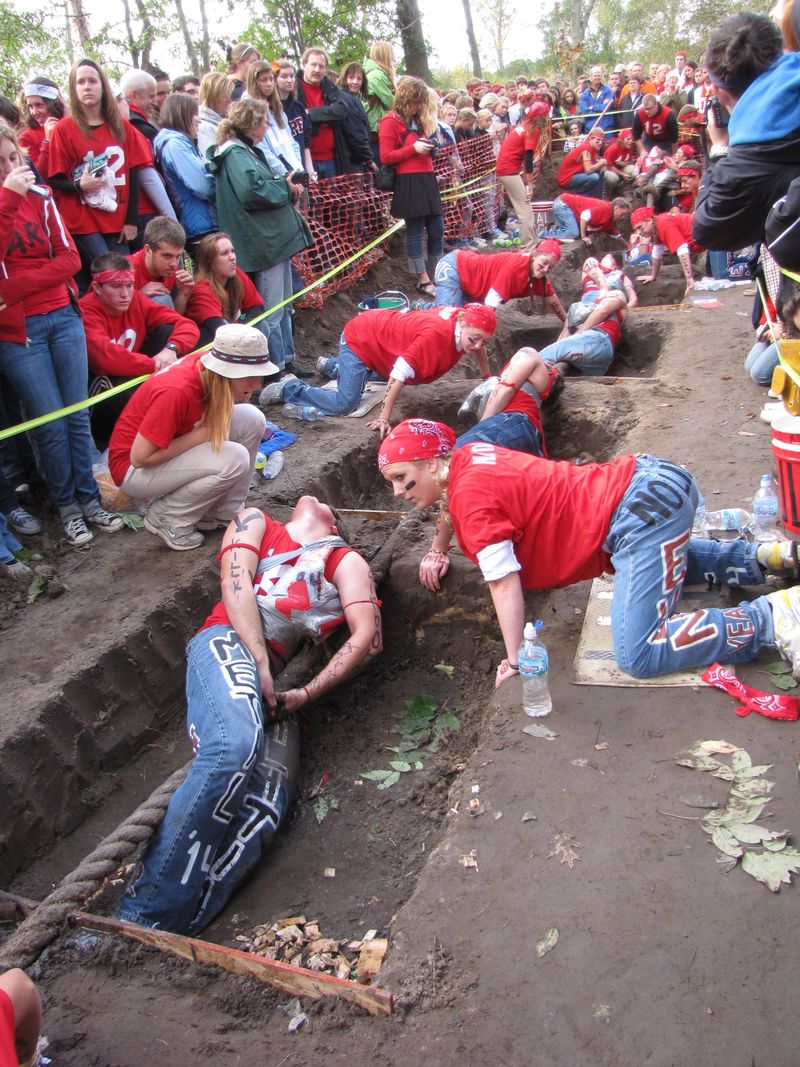 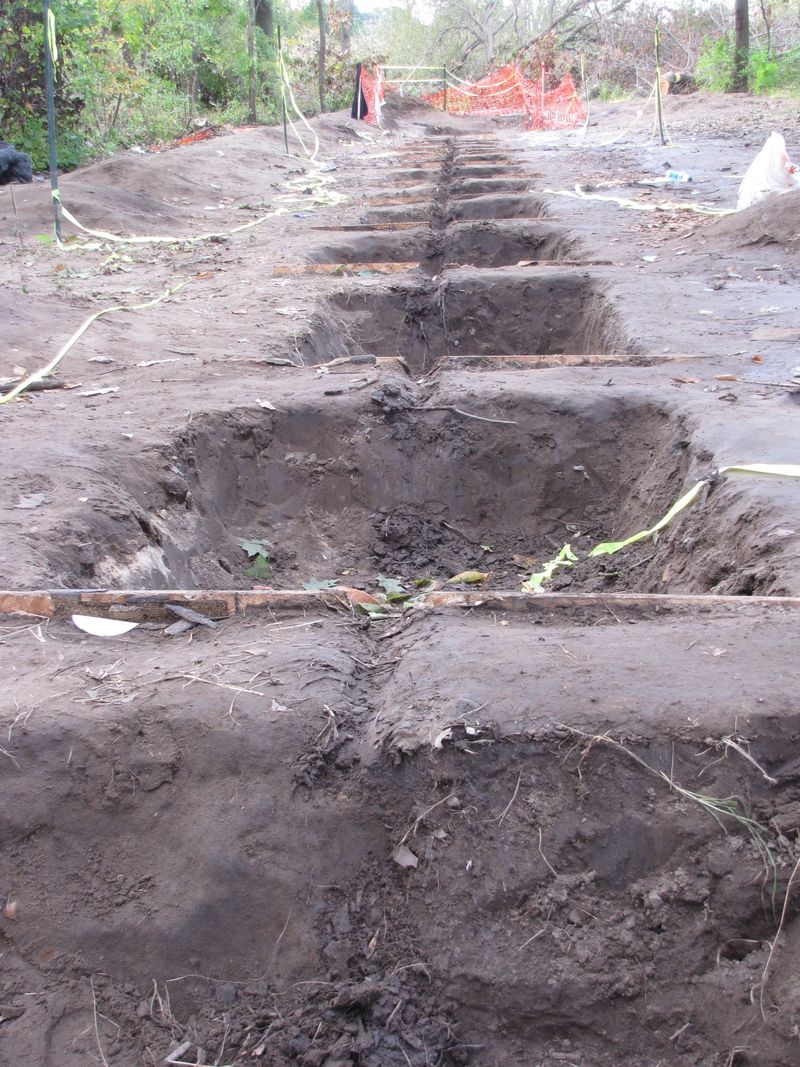 this year's Pull went the full three hours (which means there was no obvious winner -- neither side got the rope of the other team) and had to go to the judge's measurements.  The Odd Years won. . . by just a matter of feet.  (The sophomore class has a huge experience advantage and typically wins in less than three hours.)

Brian survived.  In fact, I would say he thrived.  He learned a lot about himself through The Pull -- like how to dig deep within himself; how to REALLY work as a team; how to find stores of energy and mental willpower that he never dreamed he even had!

And as for a Mom's view?  Well.  I'm really happy he did it.  I am SO proud of him.  I was a wreck, though.  It's hard to watch your child go through something like this!  Here's a photo of me that my dad took during the event. . . 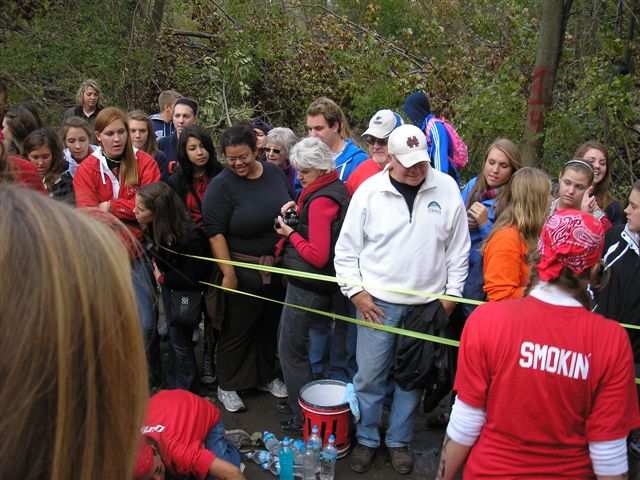 keeping my eye on my kid!  Especially because. . . the Pull is dangerous!  Broken ribs are common; pullers pass out on the ropes; it is not for the weak-at-heart!  I appreciated the presence of this guy . . . 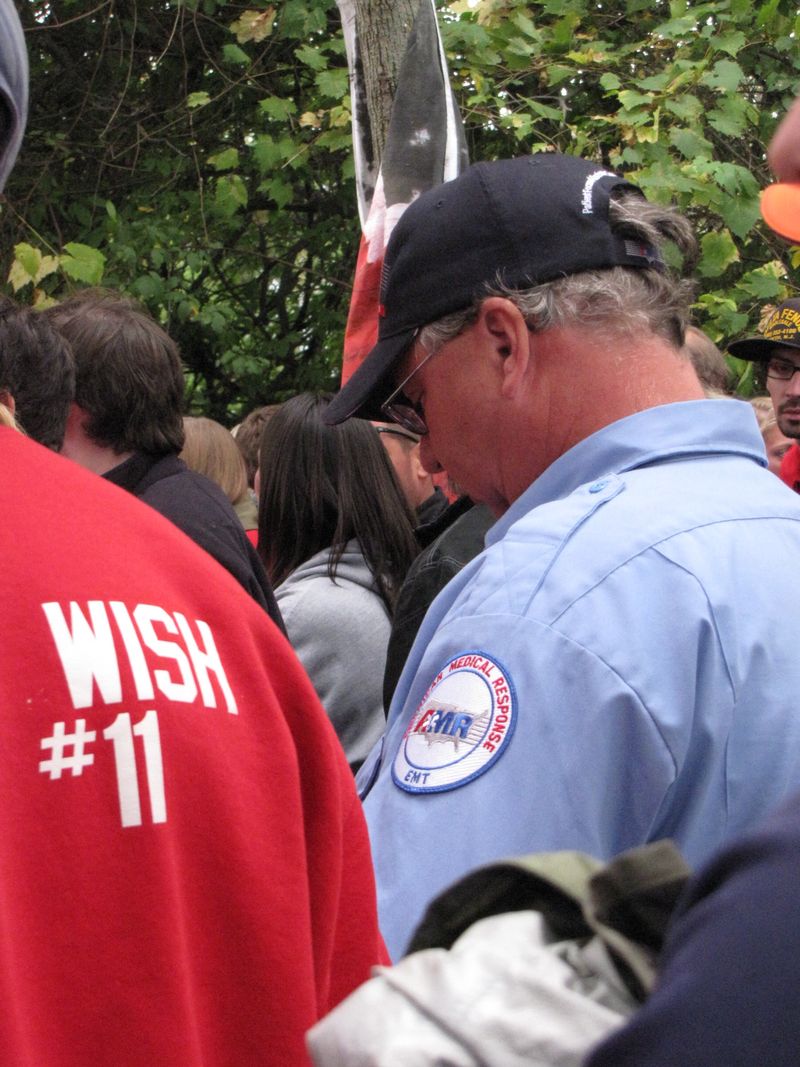 Anyway, this Mom also got a little teary-eyed from time to time during the event.  Like when I saw how Brian had decorated himself with "super Vs" --- a mom/son tradition since his kindergarten soccer days! 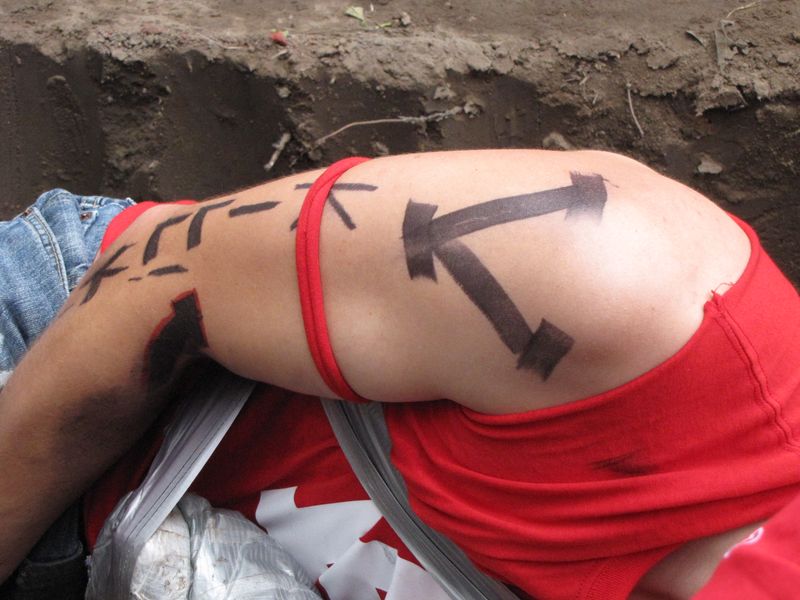 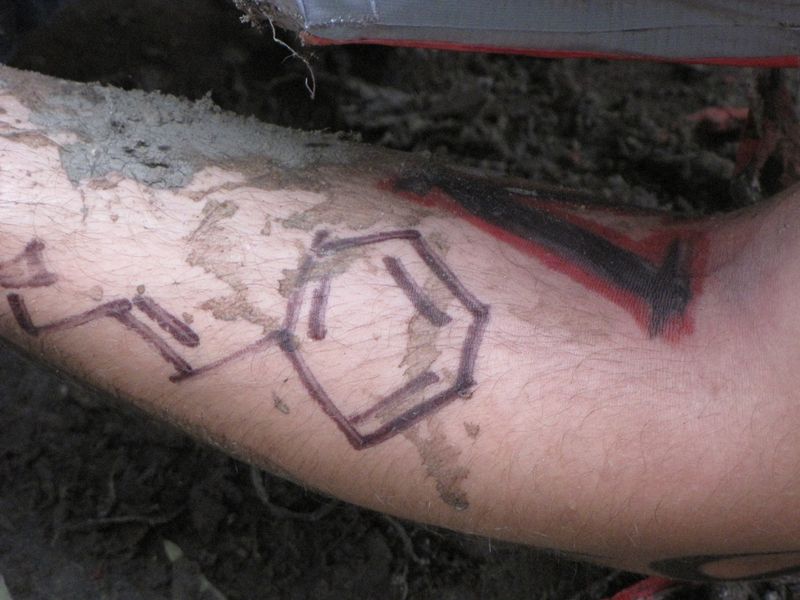 (That's another Super-V there, too!)

And I teared up when I watched Christy, his moraler, so focused and committed to my kid.  She was AWESOME! 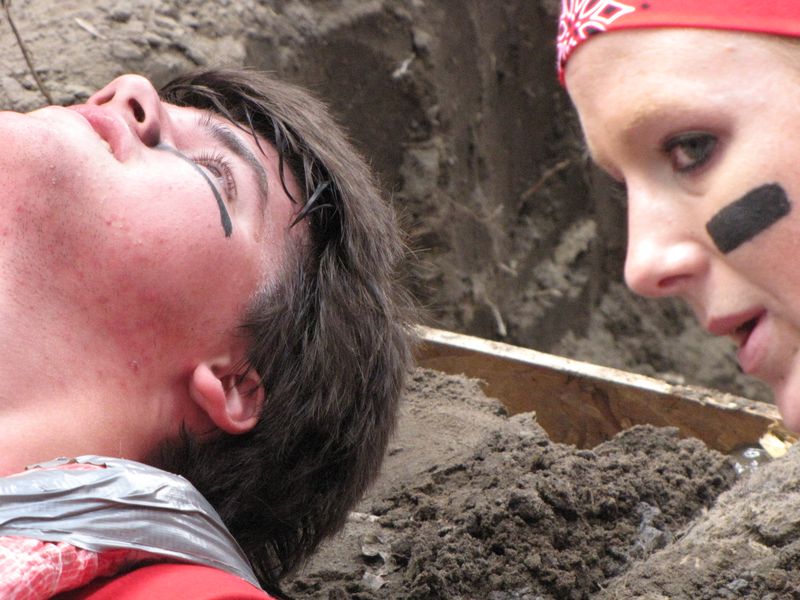 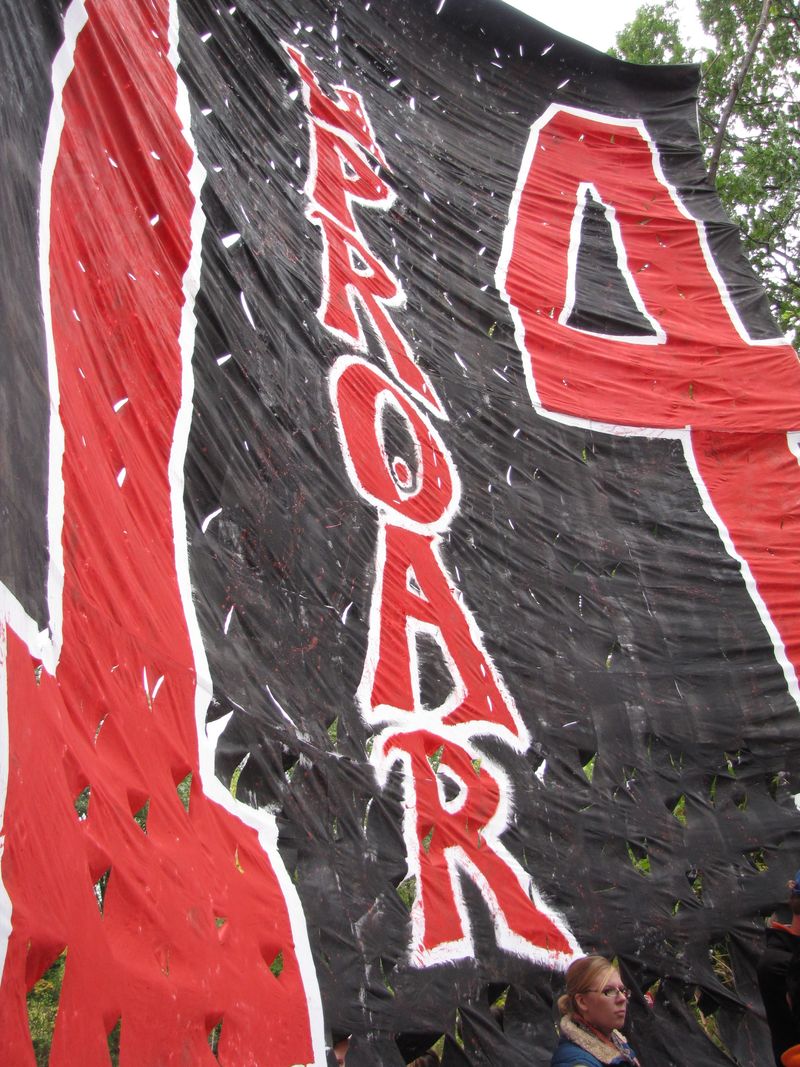 Of course, you are proud and rightfully so! What an awesome event - and I am happy your son gained so much from the experience.

He's a rather cute guy - bet the girls really like him! :)

What an experience....for all of you! I'm thinking you might have felt a little exhausted by the end of it all too...

Holy crap! What a challenge!

Talk about an amazing way to build closeness in that class and find out what you're made of. Sounds like the Even Year did a wonderful job.

So... he's shaving his head next year?

Aww - you got me with the V's! What a fantastic event and achievement. Go Brian Go!

WOW!
I saw the photos on FB yesterday and was wondering, almost asked but decided to wait for today's post, thank you for sharing with us, it really looks like an amazing experience.

Heck, I'm not his mom and I got a little verklempt :-}

Okay, I'm a total sap.
I don't know your son...
I do have Hope College memories from when my uncle taught there, but until this post, had never heard of the Pull...
and reading your post brought tears to my eyes!
Yes... they're still there... even as I type.
I suddenly really want my kid to go to Hope (and no, access to Blue Moon ice cream has nothing whatsoever to do with it).