Stepping Away from the Edge
Home Archives Profile Subscribe
Because the Day is Slipping Away
Hey! Hey! We're the Monkees! 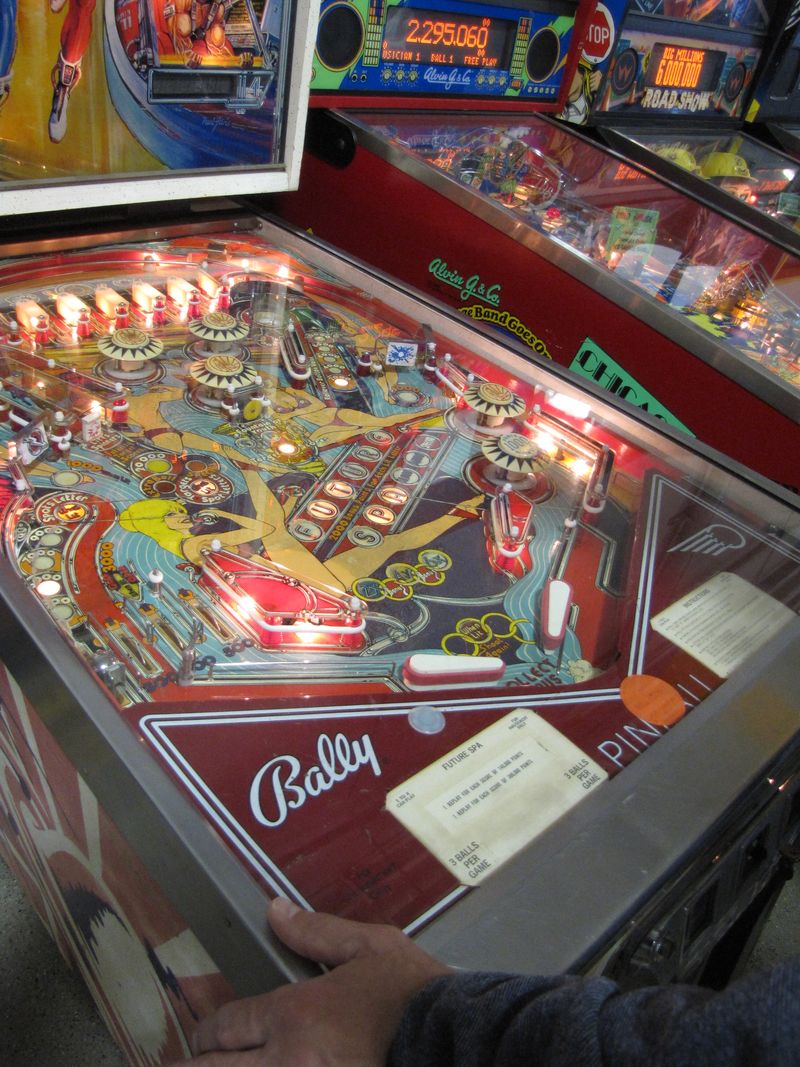 But before he was any of those things. . . he was a Pinball Wizard!  Apparently, as a boy, he saved all his money (from paper routes and his allowance and lawn mowing) to play pinball.  And, well, some things never fade away.  So, last Saturday, I took him to Pinball at the Zoo -- a pinball convention held right here in Kalamazoo.*  (We had to sift ourselves through the patrons of the Antique Show and those of the Exotic Reptile Show being held in the same venue!) 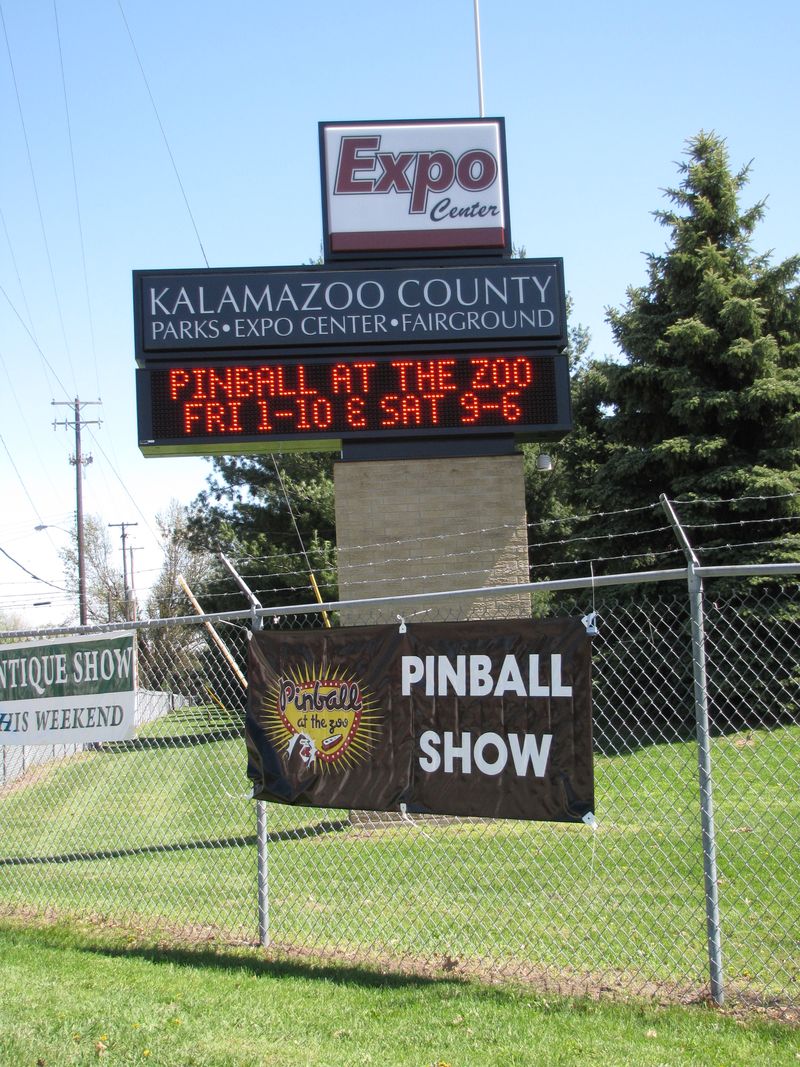 It was heaven for Tom -- and for all the other Pinball Geeks (most of them men. . . of a certain age). 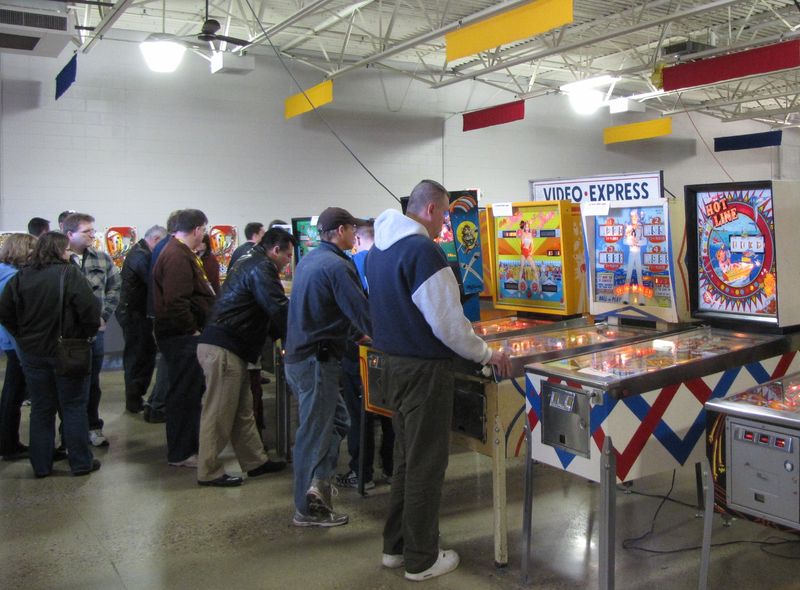 (That's the Pinball Wizard, himself, there -- 2nd from the right -- wearing a brown ball cap.)

Now, we haven't been to an event in a long, long time that required a wristband. . .

but this wristband entitled us to play any pinball game in the show -- because all the games were set for free play.  It was amusing for me to watch the guys -- all jockeying for their shot at the games.  They were trying to be polite; they were taking turns; it was a very civilized kind of playtime.  But.  You could see it in their eyes.  Must.  Touch. The. Flippers.  Now!!!! 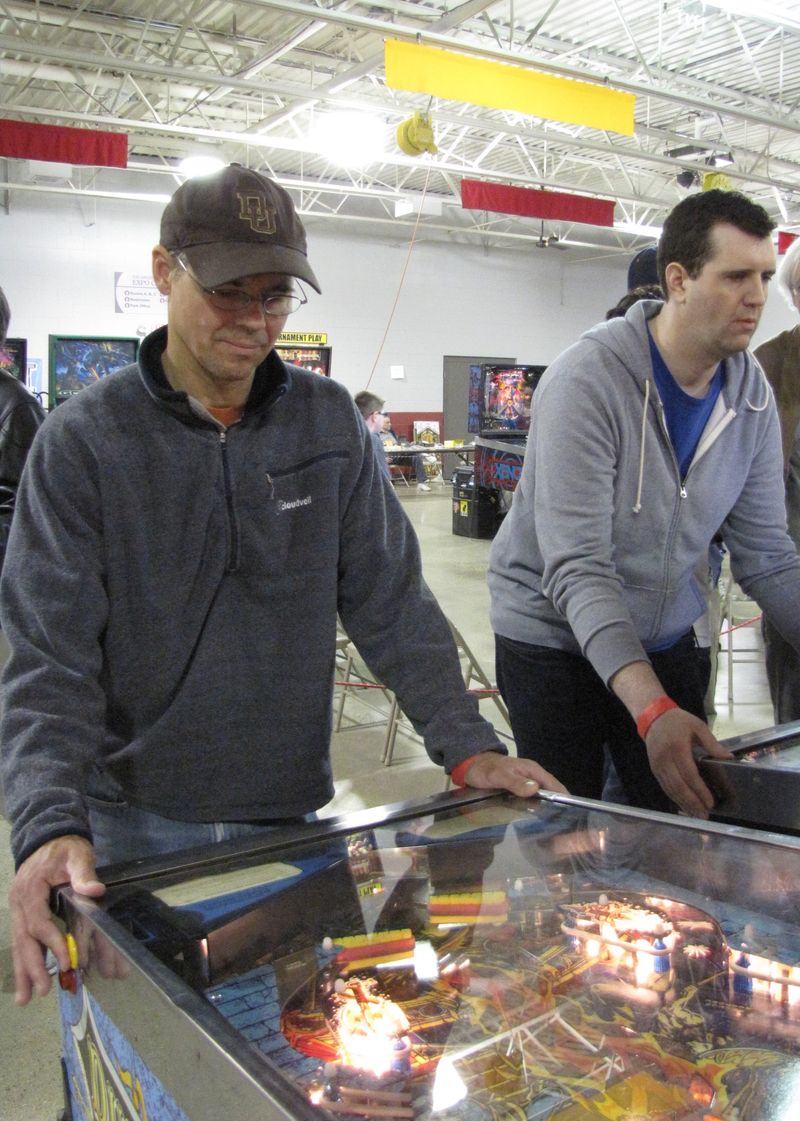 Some of the machines were very "old school." 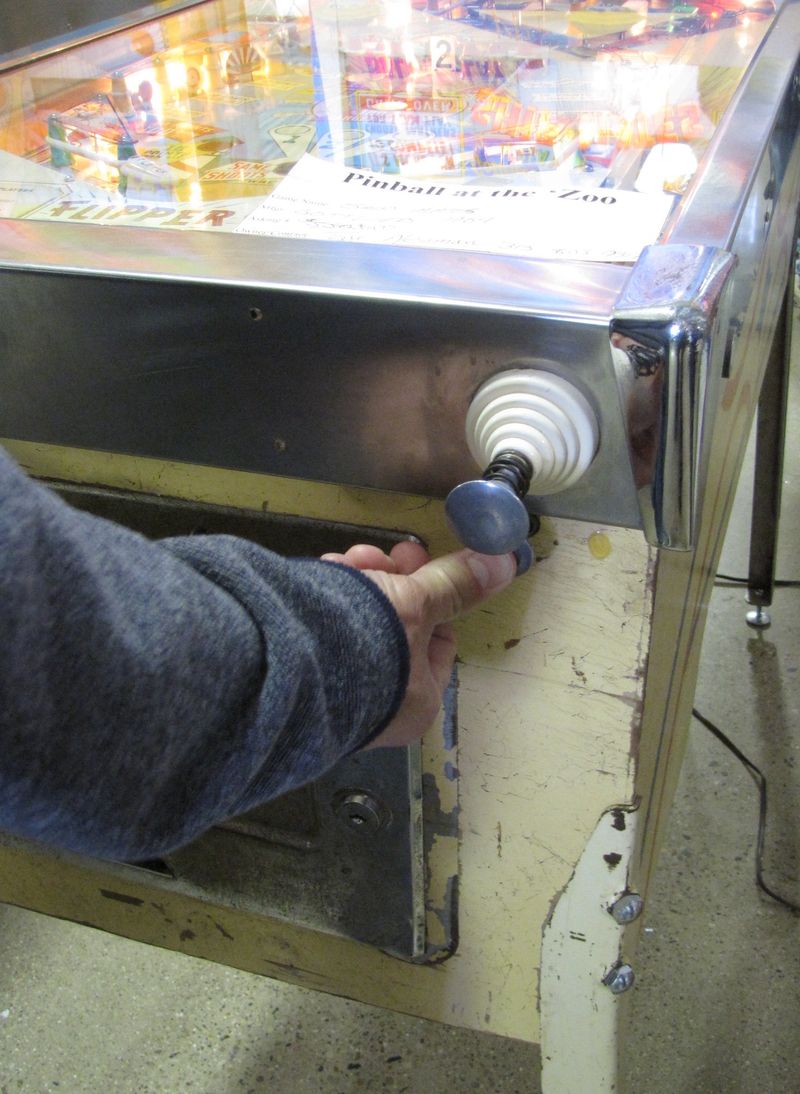 There were several vendors selling parts and pieces and bulbs and springs, and there was plenty of repairing and fine-tuning going on. 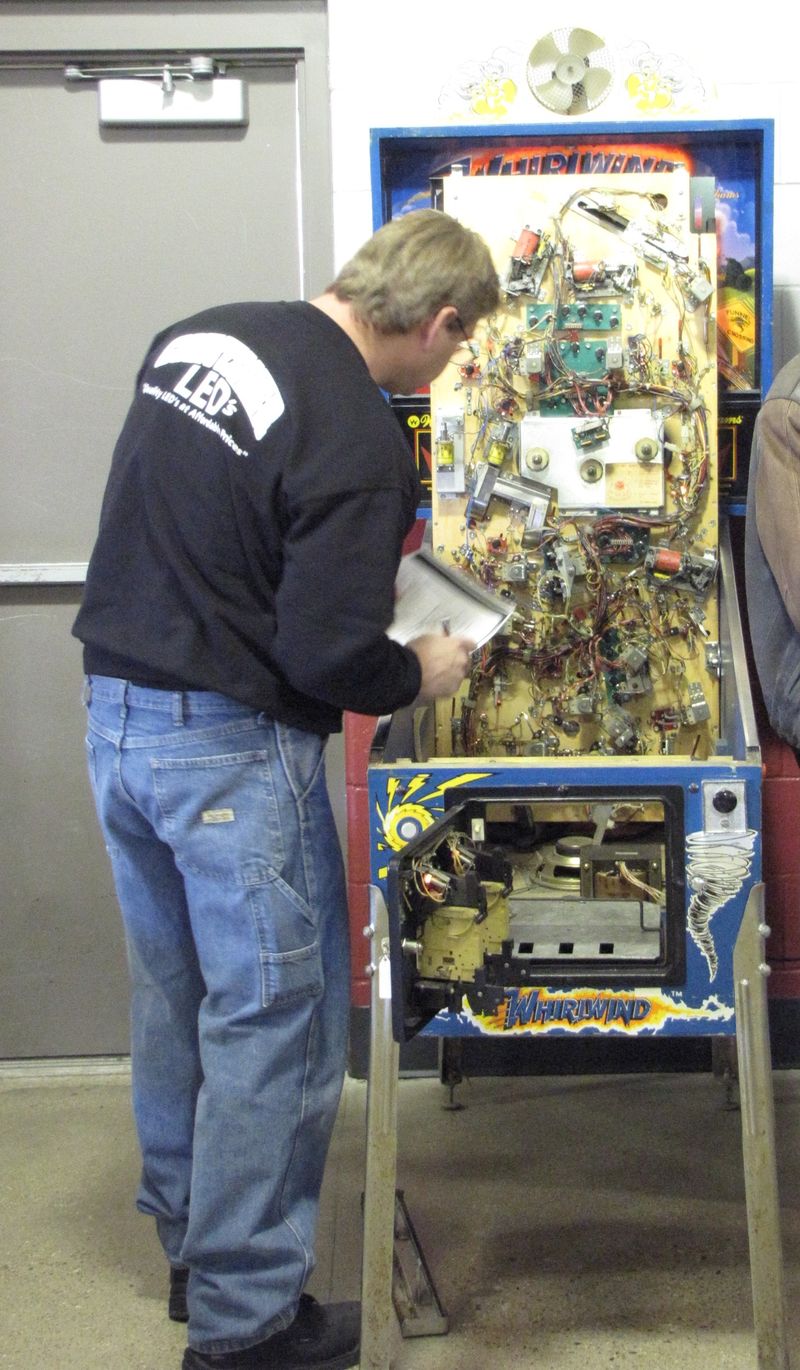 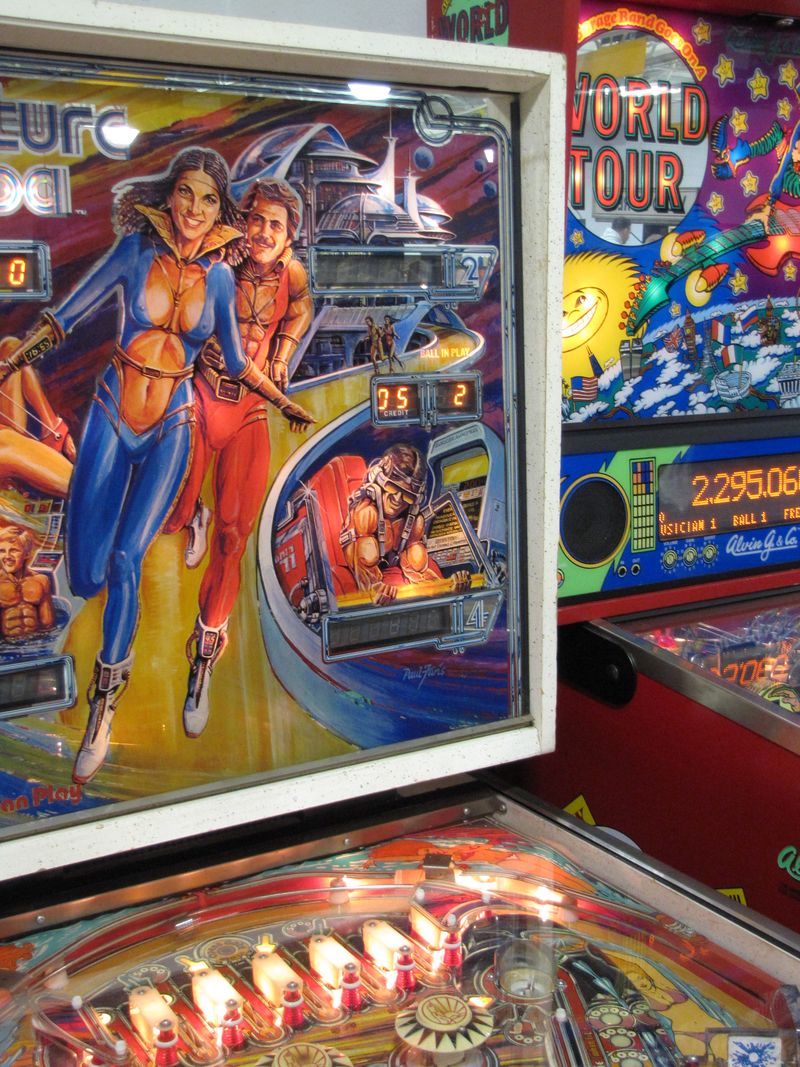 (Analyzing this topic - in tandem with with it's video game cousin - seems like it might be the perfect cultural studies/English/gamer-girl's ticket to graduate school. . .)

Saving the best for last, Tom got to try out a Brand New Pinball Game!!!  This one did NOT feature big-busted woman. . . but it did appeal to another part of a man's brain with . . . Big Guns.  The game was called Big Buck Hunter Pro, and even I must admit, it was pretty darn entertaining!  Pinball games have come a lot way over the years. 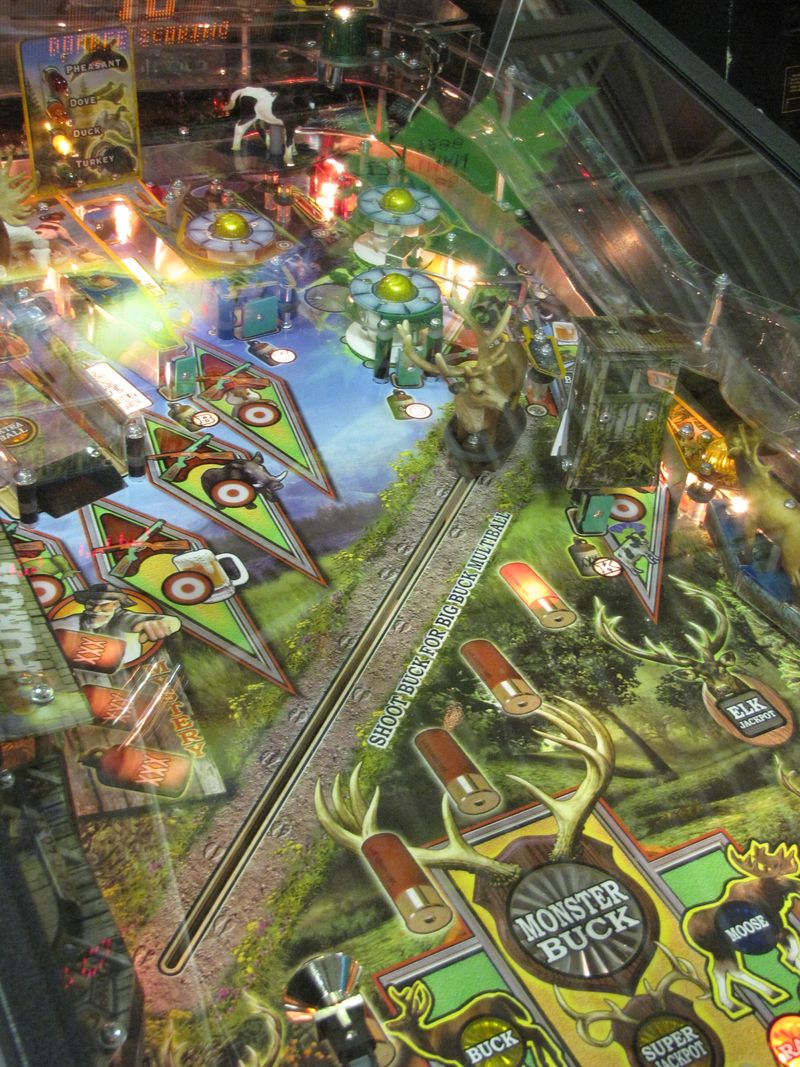 Tom especially loved the multi-ball action on this game! 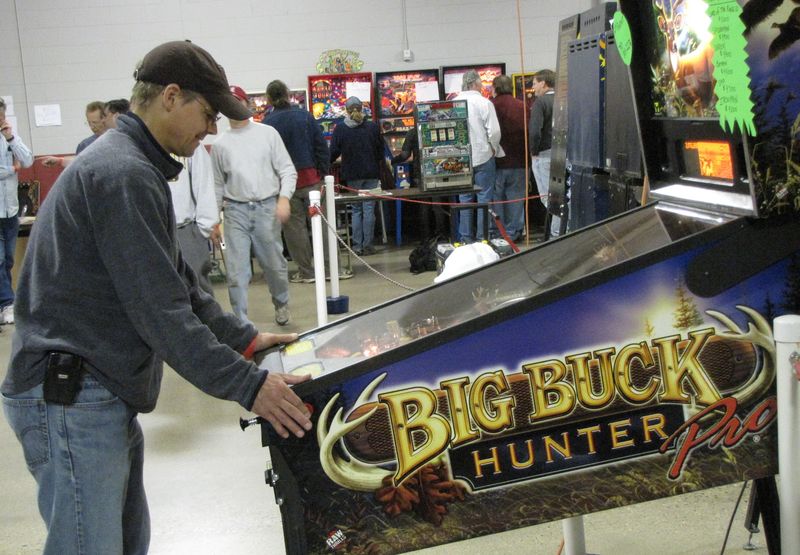 
*In Kalamazoo, the term ". . .at the Zoo" is horribly overused.  I guess it can't be helped, when the name of your community is so, well, obviously suited to clever linkages and naming opportunities.  I mean, we have "This at that Zoo," "That at the Zoo," "Whatever at the Zoo," . . . you name it, it happens "in the Zoo."

A mean pinball happening at the zoo. It sounds like The Who and Simon And Garfunkel together!
The day looks interesting, fun, and it must have been noisy, too!

Haha! That is very cool. I never played pinball much, but I was around them plenty and I love all the sounds -- from the thunk and rolling of a launched ball, to all the dings and dongs. Looks like a fun day.

I love pinball too! I live near the beach and we have a boardwalk with an arcade. Spent lots of quarters on pinball--until Centipede came out and won me over! Hard to find a good pinball machine these days!

So this was not held at the place with the lions and tigers and bears?

LOVE pinball. Skeeball is a distant second. I would have been right there too.