A Bit of A Confession

For those of you familiar with Ravelry, you will recognize that the "face" on the Ravelympics finisher "button" is "Bob."  Bob is the Ravelry mascot.  He is the beloved pet of the co-creators of Ravelry.  He has a big fan base on Ravelry.  He has his own awards.  Someone even knit a "Bob-mask" in his honor!  He is a true icon in Ravelry-land.

So much so, in fact, that I won't be posting my Ravelympics finisher button on the sidebar of my blog.  (I hope they won't kick me off Ravelry now that . . . I've revealed my true feelings about Bob. . .)

When I was a little girl, I love, Love, LOVED playing with "big girls."  I thought all "big girls" were Princesses.  They had cool toys.  They played clever games.  They watched The Best tv shows.  They listened to groovy music.  I loved them.  In my everyday-life, though, I was surrounded by boys.  My neighbor friends were all boys.  My parents' friends all had boys.  My cousin was a boy.  And, even though I had a sister, she was my baby sister for a long, long time and far too young to be a playmate.  So.  It was a real treat to be around "big girls."  I loved to visit with a particular "big girl" named Kathy  -- except for One Thing.  Here's a picture of Kathy (the "big girl") and me. 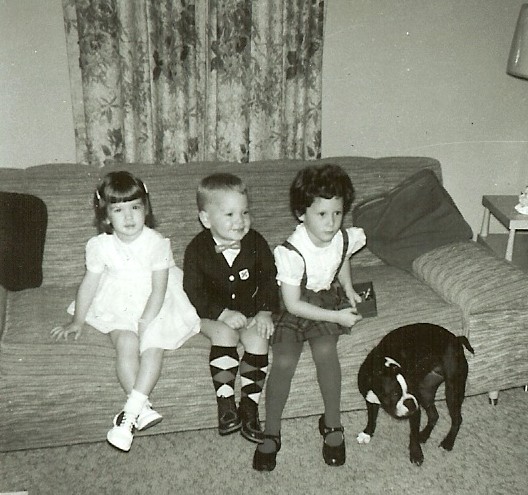 Look!  There it is!  I am miserable!  (I have no idea who this little boy is; I don't remember Kathy having a little brother. . . but I'm sure the Adults put The Boy in between me and Kathy to increase the distance between me and the dog.)

Anyway, there you can see it.  The dog . . . looks just like Bob.  Terrifying.  Creeping me out.  I've clearly been scarred for life when it comes to Boston Terriers!

"Women are the real architects of society."  -- Harriet Beecher Stowe

Today, March 8, is International Women's Day.  For more information, click on the logo in the upper left hand corner of this page.  [Sorry - this link is temporarily broken.  I'll try to fix it later.]

I'm as Free as a Bird Now

My jumble the other day?  Birds.

Free birds.  (Or, at least birds from a free pattern!) 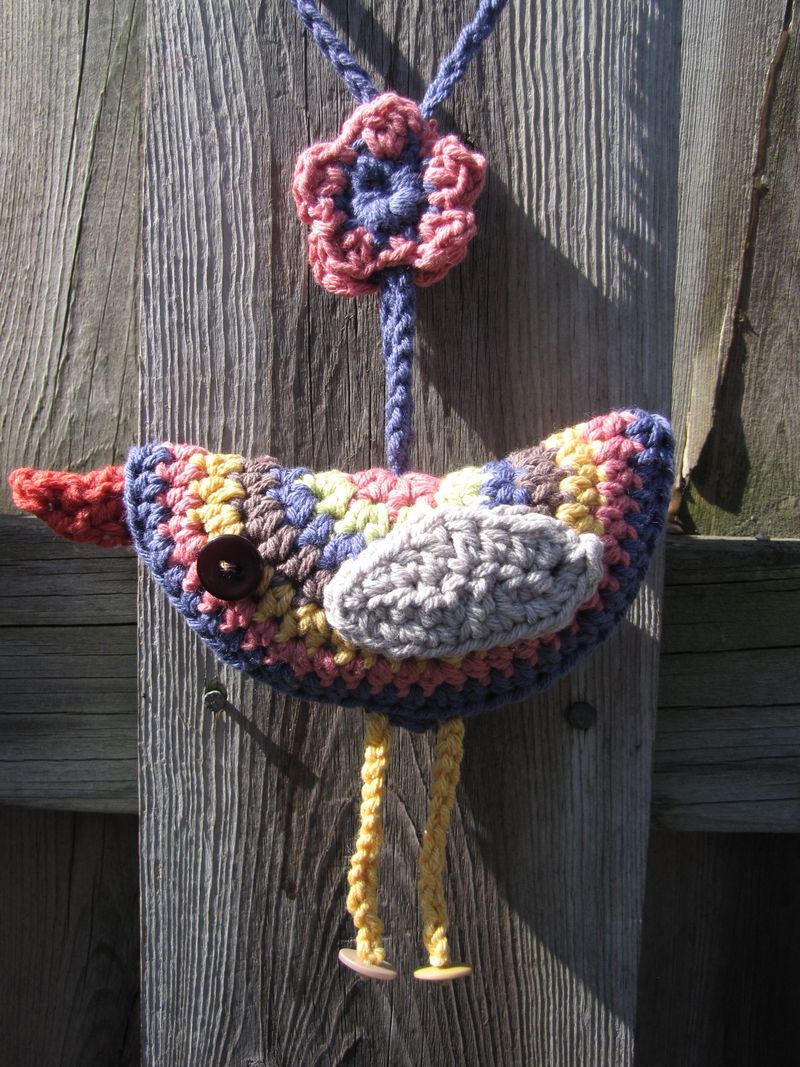 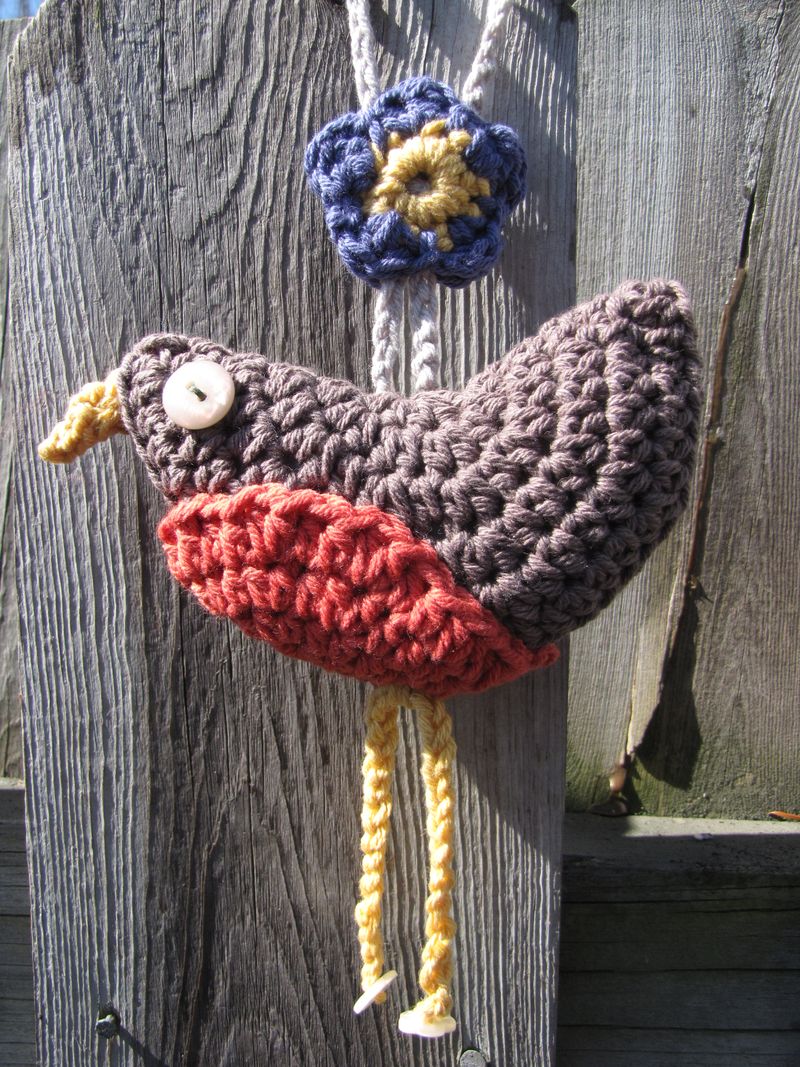 Birds make me think of spring. 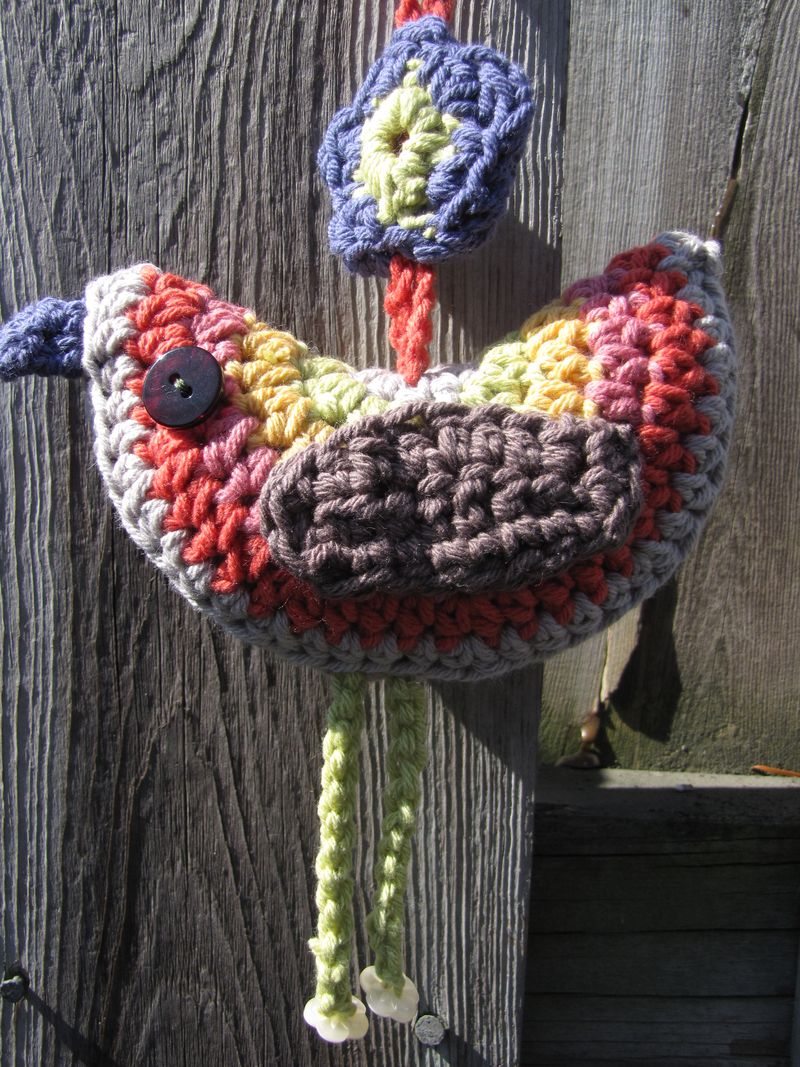 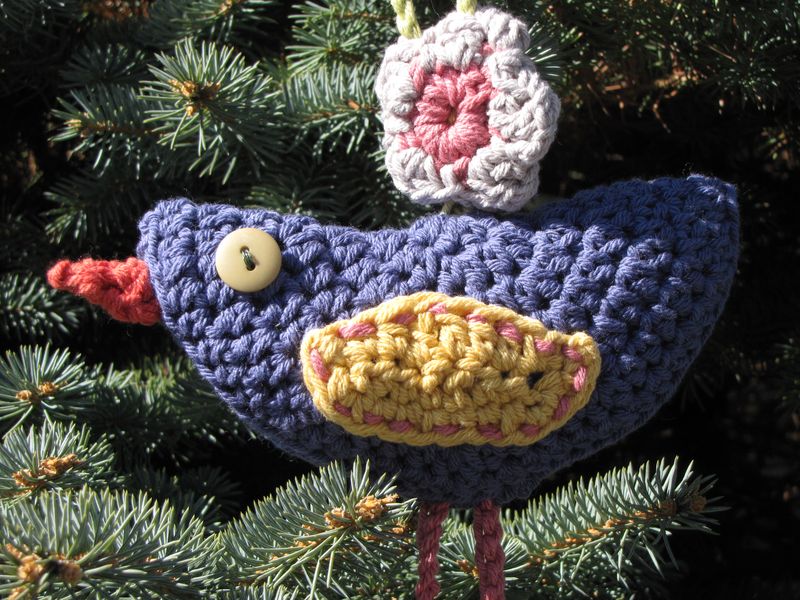 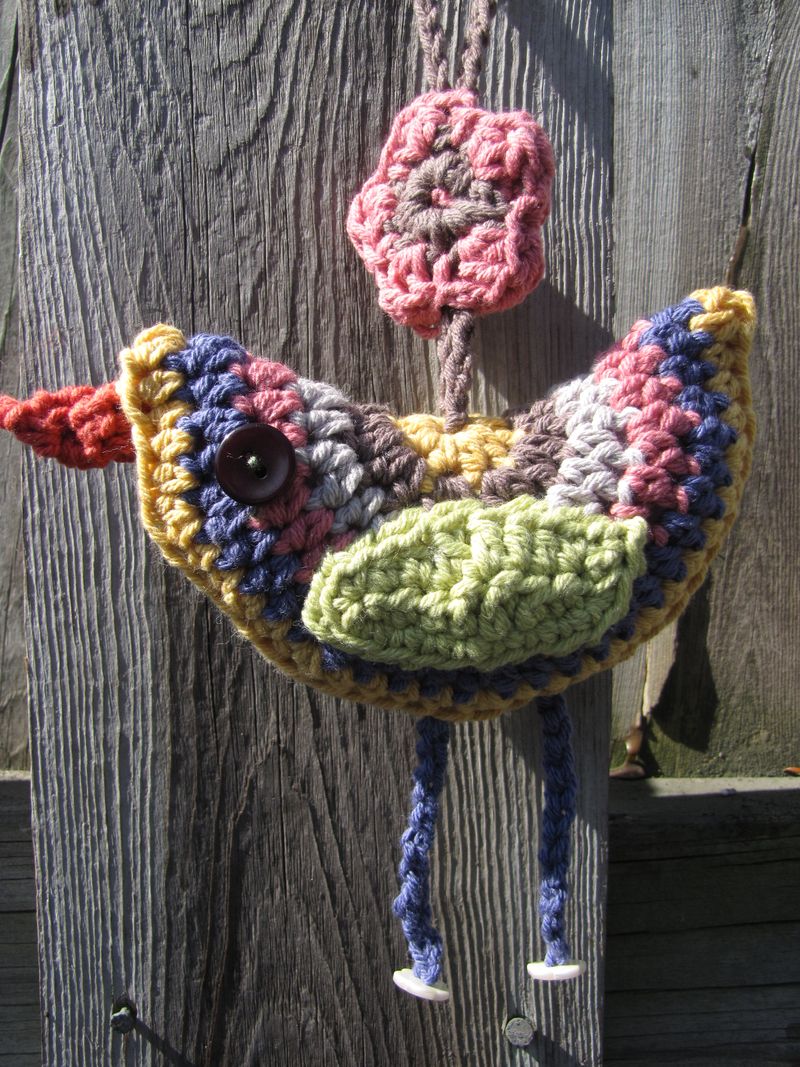 What a great way to practice your crochet skills. . . and bring a little sunshine into your day!

When I was a schoolgirl - back in the 60s and early 70s - one of my favorite subjects was history.  But I was always a bit confused.  Where were the women?  I actually figured we called it "history" because it really was. . . his-story.

I feel a little better about things now days . . . because for the last 30 years, March means Women's History Month.  And that means. . . we get a little of her-story, too.

Please join me this month as I celebrate the legacy of women . . . right here on my blog.  To get things started, here is a slide show highlighting women in history, set to Ann Reed's powerful folksong, "Heroes."

Heaven's Waiting on Down the Tracks

Soundtrack time -- an interesting version of a familiar tune, by two of my favorites!

I finished Tom's vest on Sunday afternoon -- and he wore it to work on Monday morning!  (That's love!) 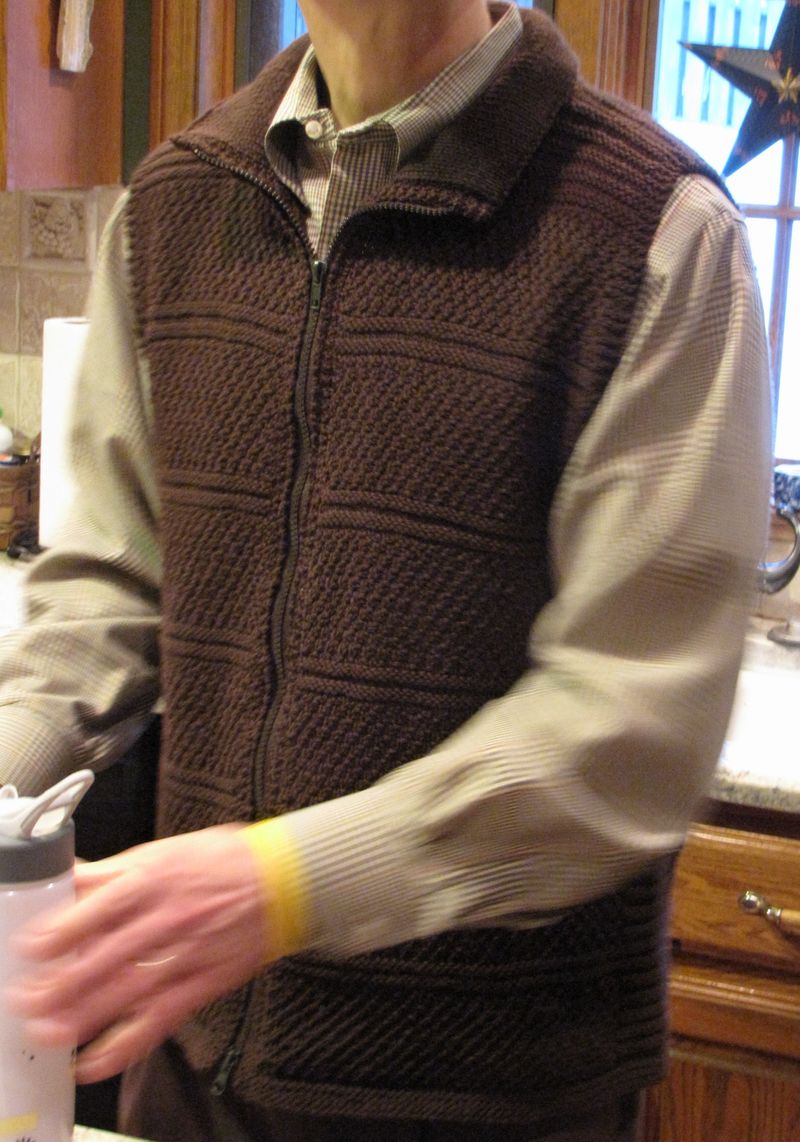 I'm happy with the way it turned out. 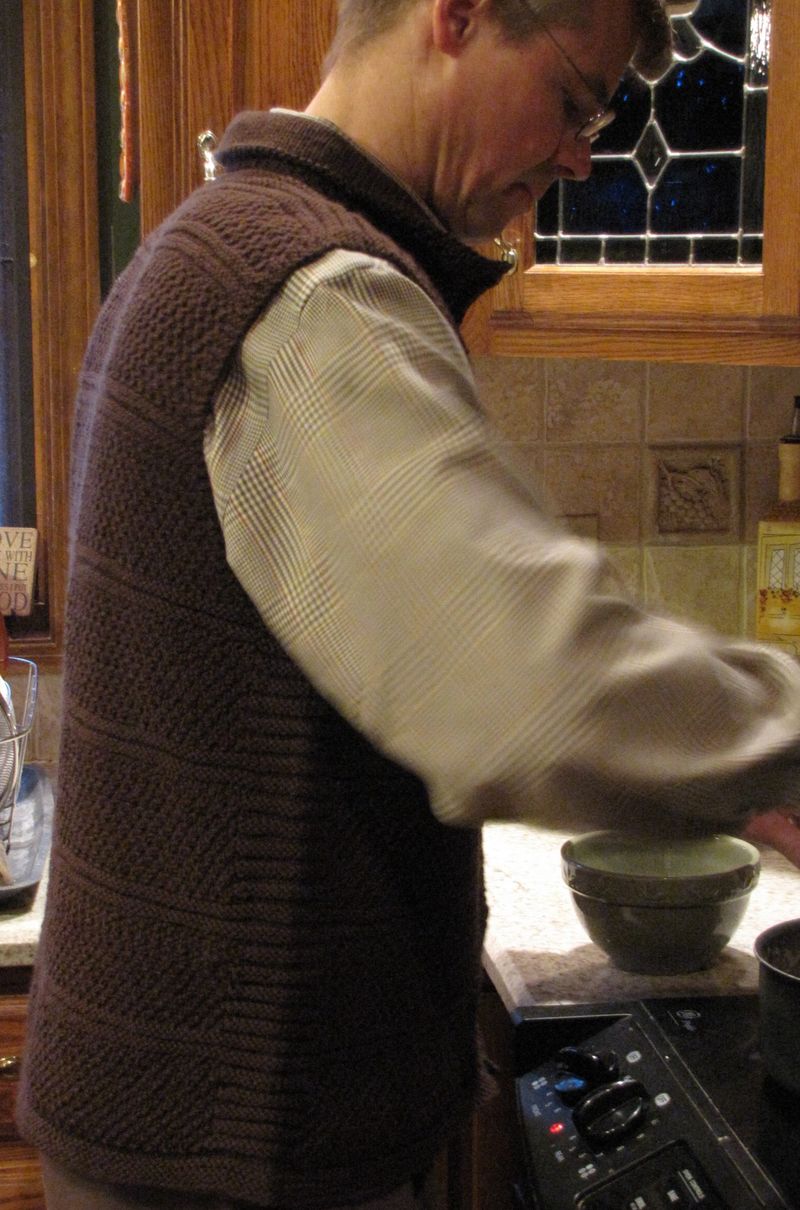 But there were a few times that I didn't see a happy ending for this one!

In fact, there were times during the knitting process that I wanted to take the pattern and throw it out on Thunder Road and drive over it a few times.

Although there aren't any technical problems (errata) with the pattern. . . I would say it's one of the sloppiest patterns I've ever knit.  This vest has a really simple shape.  What makes this design interesting are the strong horizontal lines and the textured "stripes."  Yet. . . the pattern is not intentional (at all) in working those stripes into the decreases at the underarm and neck -- or the shoulder!  The pattern is based completely on measurement and not on the integrity of the design "lines."  (If this is not making any sense, take a look at some of the finished vests on Ravelry.  It becomes immediately obvious.)  Anyway, I had to do a lot of calculating and measuring to get my "stripes" to work the way I wanted them to.  (See detailed information on my Ravelry project page.)

I also made some modifications to the collar (again, detailed on my Ravelry project page) because the pattern as written creates a really bulky, stiff-looking collar. 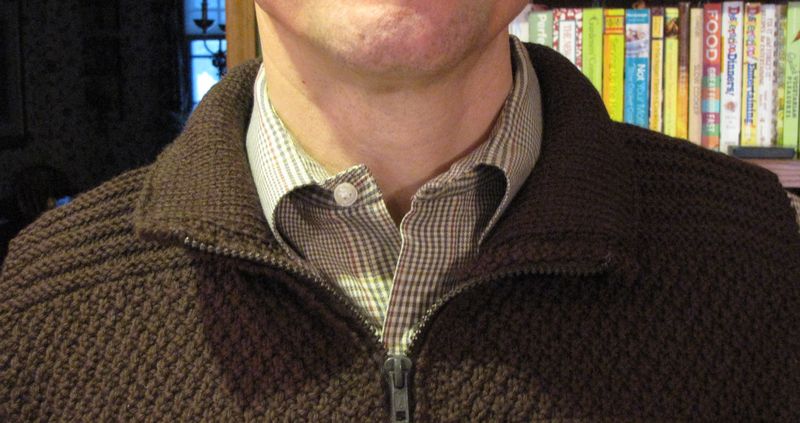 Another really weird thing -- the pattern calls for tiny little armholes.  In the size I knit, the measurement from shoulder to underarm was only 7 3/4"!  For a man's vest!  I got a couple of other vests that Tom wears and did some measuring -- and then decided to increase the armhole to 10".  That's a significant difference -- and you can see on the side view photo above that it worked out well.  If I hadn't made that increase, his shirtsleeve would be totally puckered under the vest.  This adjustment meant lots of calculating. . . and several fittings. 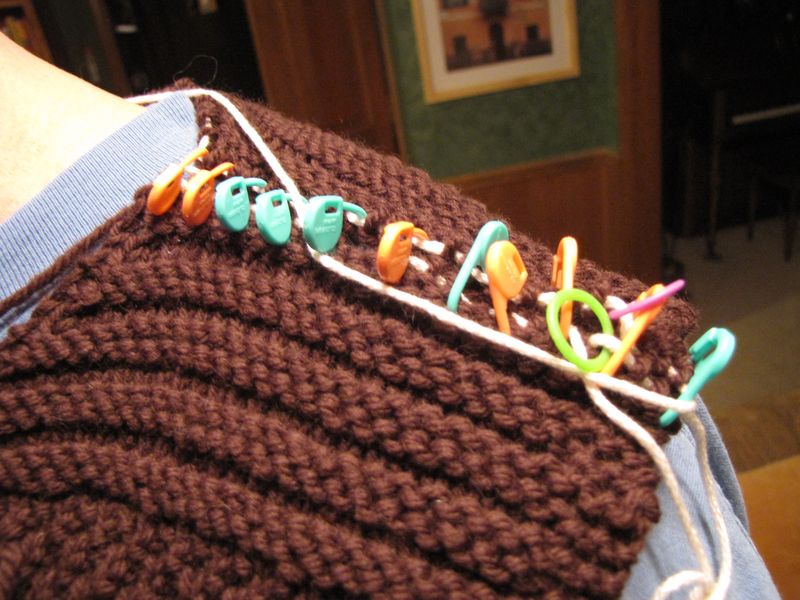 For such a simple design, I had to do a lot of thinking!  Then, just when I was almost finished, I fought with the zipper for most of Sunday afternoon.  Eventually, I won.  (I had to get my Tim Gunn bobblehead in on the action.) 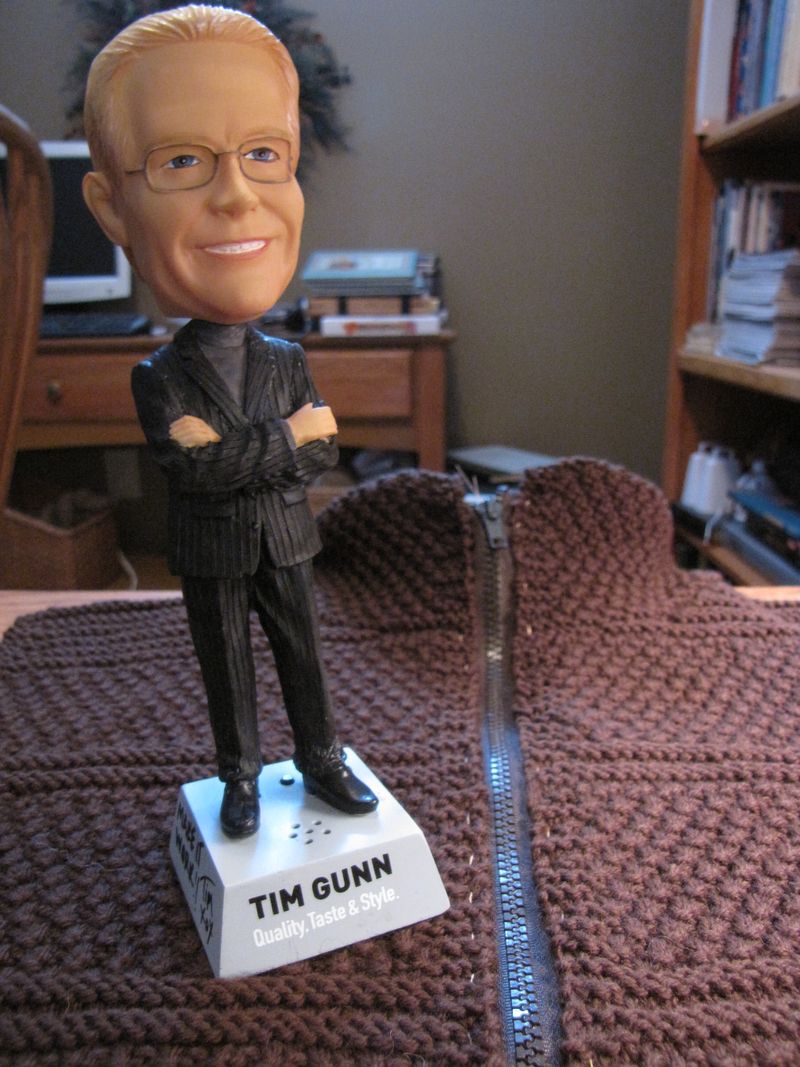 Show a little faith; there's magic in the night. . .

In the end, I think this was a perfect Olympic knit for me.  It was a do-able project (not having sleeves really helped!), and it gave me the incentive to complete a project I've long wanted to make.  Best of all -- Tom likes it and will use it!

March is one of my favorite months.  Even though winter still has a tight grip on things, it becomes more evident - in March - that spring is right around the corner.  The days are longer; the skies are bluer; the air is warmer -- and smells more earthy.  Mud.  Kites.  Leprechauns.  Crocus.  Daffodils.  You can hear it . . . it's coming.

I'm sure you've heard the old adage . . . March comes in like a lion (lamb), and goes out like a lamb (lion).  Well, when I was a kid, I paid close attention to that "weather forecast."  It was tremendously important to me --- because my birthday is at the other end of the month.  I wanted to predict what the weather might be for my birthday!  I wanted the lamb - spring and flowers and birds - at the end of the month . . .  so I was always pleased when March started out like a lion - with some nasty weather.

As for today?  I'd say. . . we're starting out like a lamb.  It's cold.  And there is snow on the ground.  But it's that icy kind of snow that's breaking down and melting away. 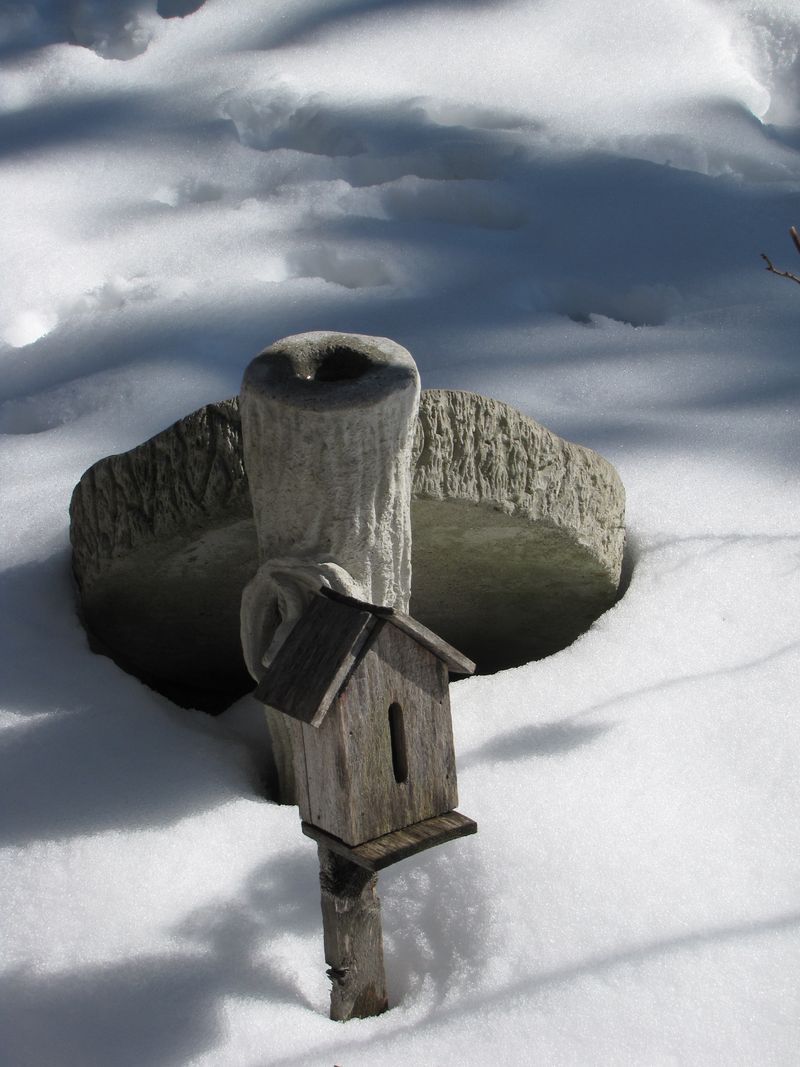 The sky is blue today, and I can see the very beginnings of buds on some of the trees. 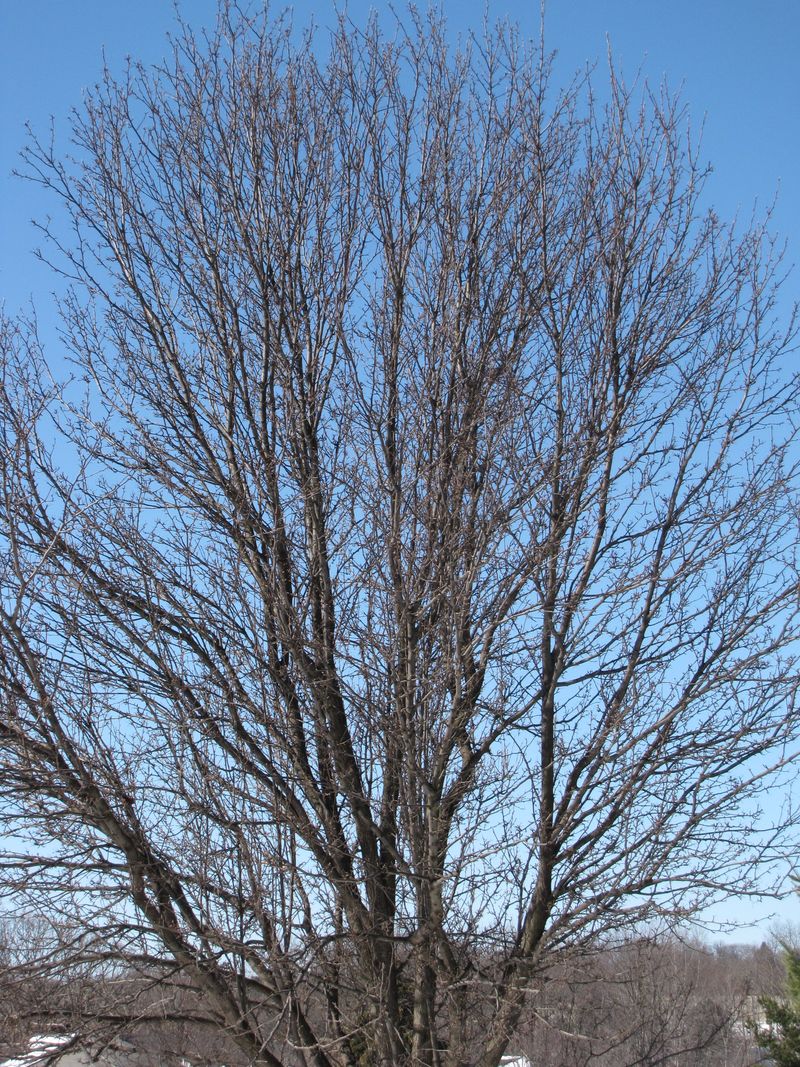 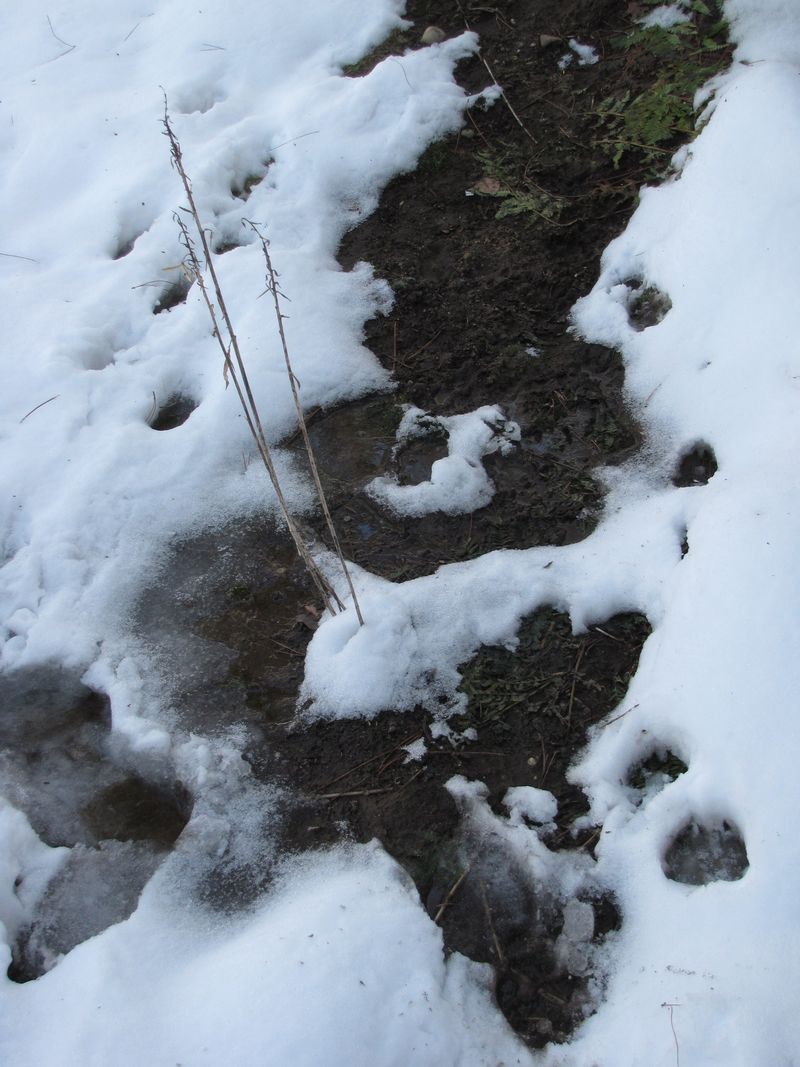 And if you stand near my house, you can hear the water running through the eaves as it melts off the roof. 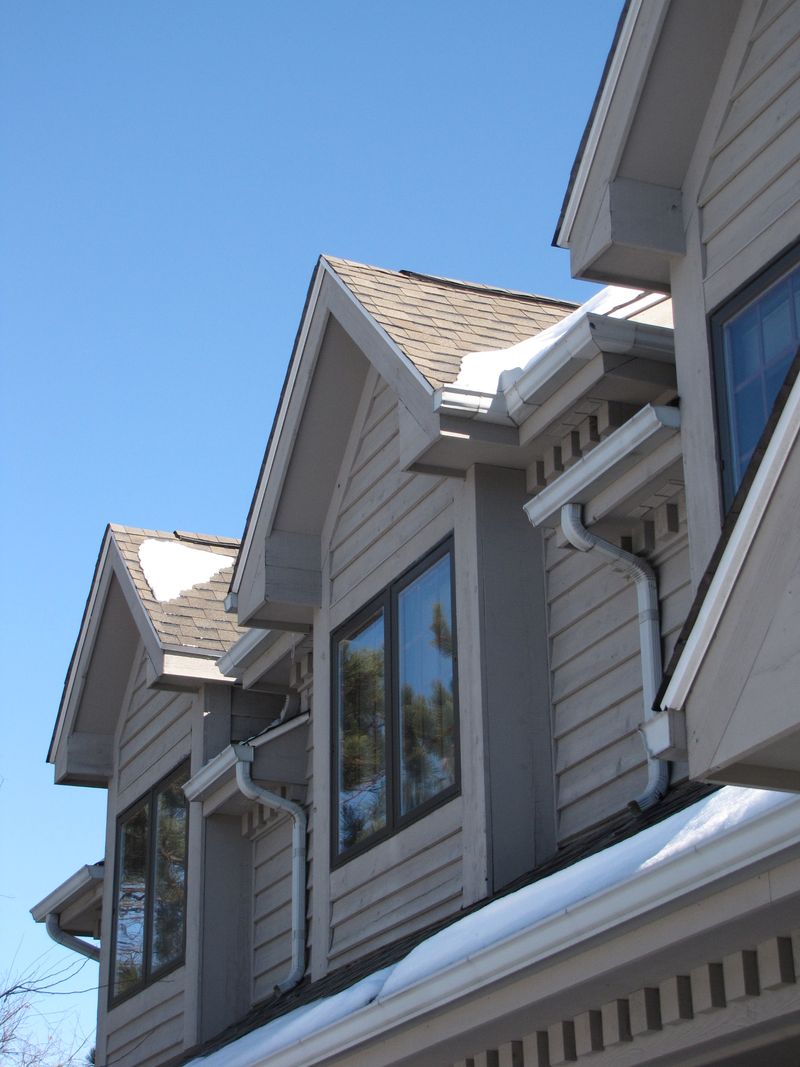 The piles of snow in the driveway are getting smaller.  Slowly. 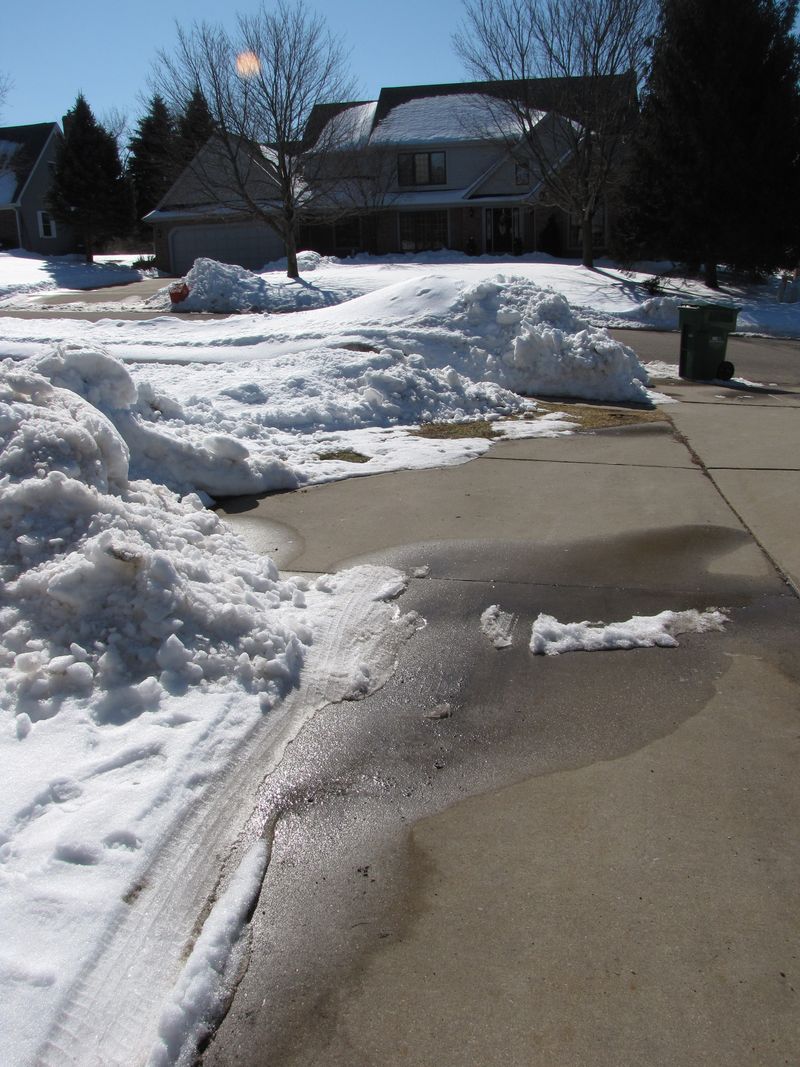 March is the messenger.  Spring is coming!  But it doesn't look so promising for good weather on my birthday!  ;^)