You all have met the important men in my life -- Tom, Brian, my Dad -- but I don't believe I've ever introduced you to another very special "man" around here. . . 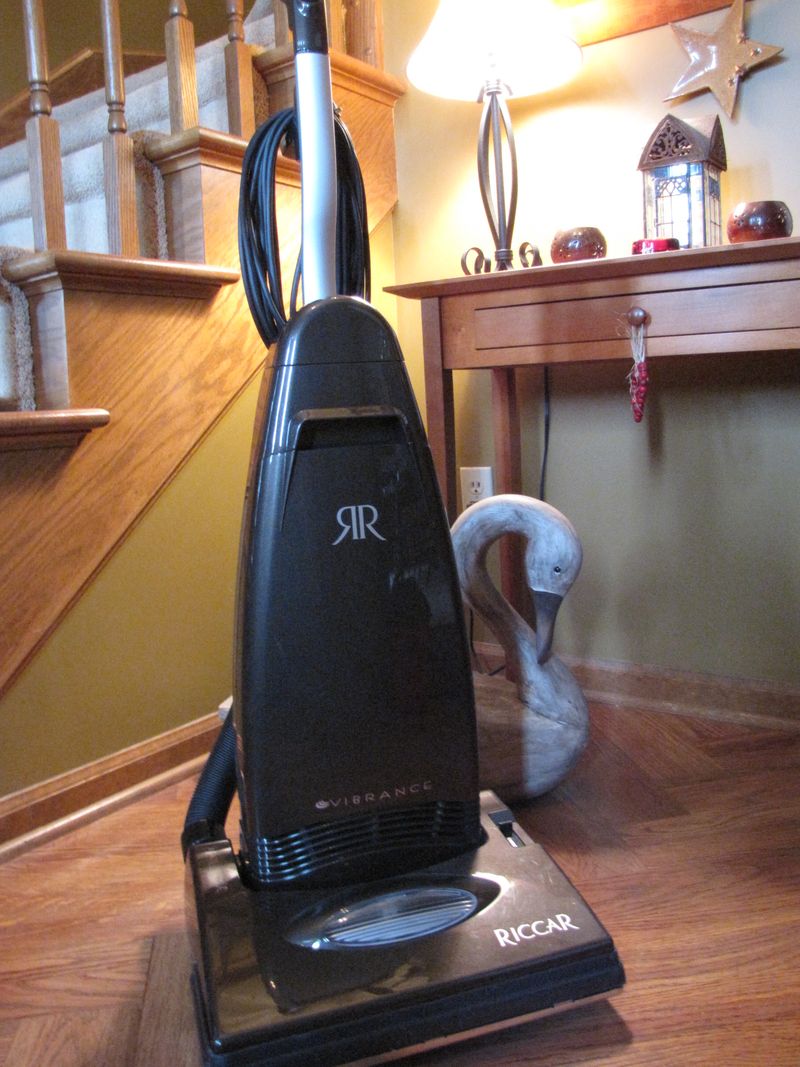 Yes.  Mr. Rick is my vacuum.  And not just any vacuum, let me tell you!  No!  Mr. Rick is an Investment Vacuum.  He's going to be around for a long, long time!

When Tom and I were first together (before we were married even), we received a new vacuum as a "housewarming gift."  It was an upright Hoover.  No tools.  No attachments.  The Hoover served us well for over 20 years.  I changed the bags frequently, and the belts somewhat less frequently, and it lasted a long time.  The Hoover eventually lost its life up at our cottage a couple of years ago (where it suffered Much Abuse -- including the Exploding BB Incident) when the handle broke off, and we still used it anyway for awhile it by pushing it around.

Anyway, since the Hoover died, I have gone through any number of relatively inexpensive vacuums, usually picked up at Target.  I tried another Hoover that featured "multi-chamber-tornadic-action."  Lies.  I tried the Dirt Devil that was lighter than air.  Lies.  I tried a Panasonic that claimed to suck dirt out of my carpet faster than my dog could track it in.  Lies.

So, a year ago, desperate for a new vacuum, I decided to visit a store I'd previously only laughed at as I drove by.  VacWorld.  How lame is that?  A store totally dedicated to vacuums?  How could it survive?  And in this economy?  I thought it was a joke.  But when I walked in -- I was amazed!  They were busy-Busy-BUSY!  There were vacuum salespeople and vacuum repair people.  They have an entire department dedicated to Industrial Vacuums.  They are thriving.

And.  They introduced me to Mr. Rick!  Mr. Rick is part of the Riccar line of vacuums --- "the first name in vacuums that last."  We're talking heirlooms here!  Investment Vacuums.  Mr. Rick has his own "tool box". . . 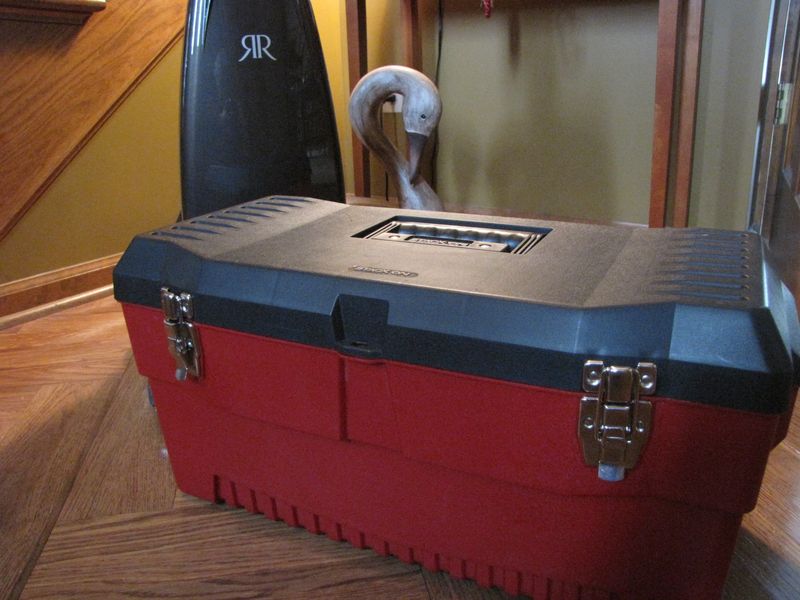 full of attachments and hoses and brushes and, well, tools. 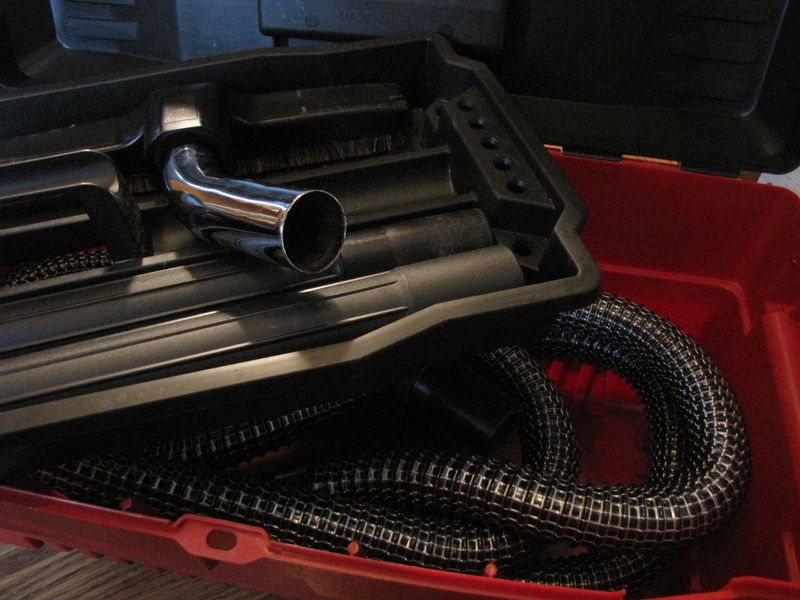 (My personal favorite is the hand-held turbo brush.  It's a dream on stairs!)

Anyway, Mr. Rick and I have become the best of friends.  He is absolutely committed to clean floors.  Absolutely.  He works and works and works.  He is light and breezy and comfortable to "drive."  I love Mr. Rick.

Because Mr. Rick is an Investment Vacuum, I can't just change his belts myself.  Oh, no.  Mr. Rick needs to go in for an annual tune up.  (Vac World puts on a little reminder sticker -- kind of like when you get your oil changed in your car!) 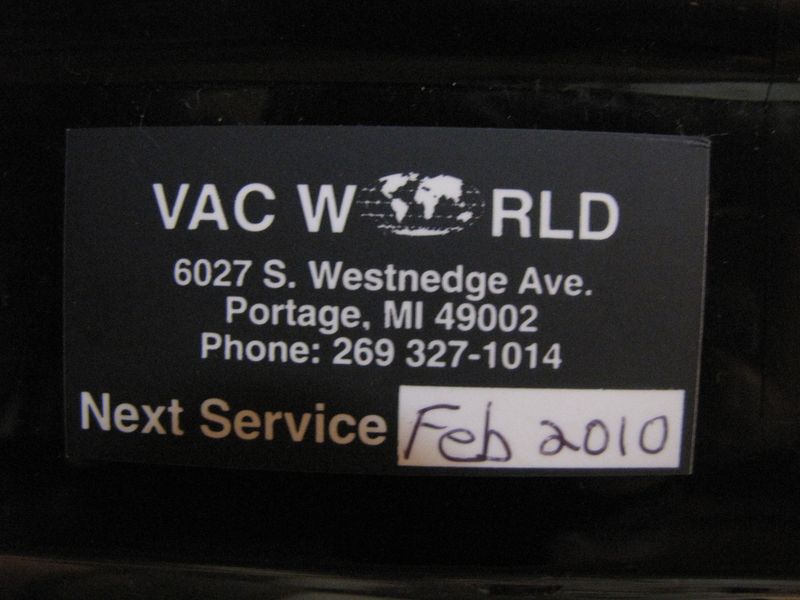 I think, for Mr. Rick, that a trip back to Vac World will be like a spa retreat.  He's off tomorrow -- and he'll be away for a whole week.  Goodbye, Mr. Rick.  I'll make sure there's plenty of dirt for you when you return!

I think I love your Mr. Rick.

I think VacWorld is doing so well because of how many vacuum cleaners suck and not in a good way.

Mr. Rick is a wonderful man to have around!

The latest book of my most favorite Israeli author: Meir Shalev, is called in Hebrew: The thing was like this but the English name they gave it is: My Russian Grandmother and her American Vacuum Cleaner - I am not joking- the hero of this book is a vacuum cleaner and you just reminded me I need to read it and soon :) thank you!

Got a good laugh out of this post. Personally, I HATE Mr. Rick; I don't care how good he is to you! If it involves cleaning, it just isn't fun! Now after having said that, I DO keep a clean house and the older I get, the cleaner my house gets, but I don't like it~thus why I loved life, while it lasted, in our RV~not much to clean! Cleaning just takes time away from the fun stuff in life such as knitting, sewing, etc...

Haha. Cookie is so right!
I bet Mr. Rick would get along nicely with my Princess! ; )

Hilarious, yet... amazing. I'm somehow jealous and thinking I need one. What does a Mr Rick cost? As I have NOOOO idea, my shitbag vacuum is a sears clearance model from way back when and we're not in such love.

PS --We have an Oreck vacuum store here in town and I always wonder how it exists. Must be Mr O devotees around too.

There was a store on the north side of Indianapolis that made me giggle every time I passed it. "World of Dinettes".
I am happy for you and Mr. Rick.
We have a roomba, but we haven't gotten it working on a regular basis quite yet. A few more cluttered areas to clear then he will join the rest of the family, I look forward to watching the cats.

WOW! What a testimonial! I might have to see if there's a Mr. Rick in my future. I hate vacuuming but if there exists a true working vacuum, well, that could change everything.

I love a good vacuum cleaner! Even did a post about mine once, may that Hoover RIP...