Stepping Away from the Edge
Home Archives Profile Subscribe
Briantology
Next

Yep.  The Olympics are speeding rapidly to a close. . . and I'm knitting at a frenzied pace.  Will I make it?  Will I finish by Sunday?  Am I feeling . . . under pressure?

Nah.  No pressure.  I'm making good progress, but I might not finish in time. 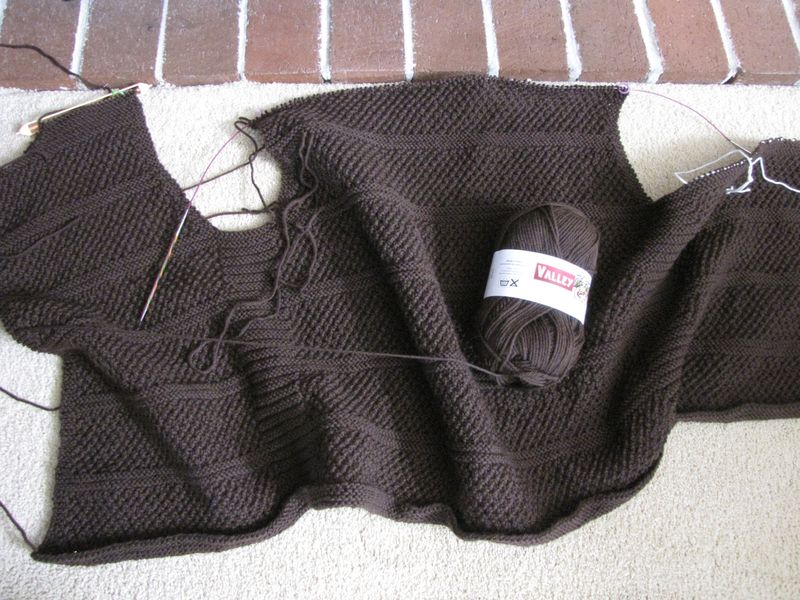 Maybe I'll finish.  Maybe I won't.  I'm not worried about it.

I haven't dropped everything to knit constantly.  I haven't lugged this project to a hockey game or packed it in my car when I've gone visiting.  I haven't skipped any workouts or meetings or sleep.  (In full disclosure, though, I did put off cleaning my bathrooms.  But I probably would have done that anyway.)

So, whether I actually finish by Sunday or not, it doesn't matter.  I feel really good about this project.  It's almost done, and I've made great progress in a short period of time.

Good for you! I am considered my multicolored striped raglan a sort-of, kinda Olympic project. Didn't sign up for anything, definitely will not finish by Sunday, but I work on it for several hours every evening whilst the Olympics play on the TV.

That's the best mood to knit and finish on a deadline! and your vest looks really nice even though it is so brown! :)

I'll join you. I have a sketch finished of my intended pattern/project.
And a lot of stuff I should do instead.
(Bathroom is right off the list)

Not panicking is key. You'll do it! The vest will be fabulous.

The vest looks great! I love that pattern but the moss stitch? Definitely a challenge for me.

It's looking fantastic! I'm not good with any stitch that calls for a lot of back & forth -- seed, moss, even prolonged ribbing -- it just kills my fingers/hand/wrist/arm/elbow/shoulder and sometimes even my back. Heh. ; )

I have two FOs and three more on their way, decision to frog another; I will not finish it all by Sunday, especially after hitting the wall yesterday, but it's been a good run and I've had a fabulous time!

Looks really nice. You can do it!

Oh, great progress! This is going to look fantastic. Good for you for perservering through all the frustrations and do overs.

Gotta tell ya, I've been watching curling, and it is FASCINATING! I was actually really getting into it!

The vest is very handsome, and I think it is wonderful that you have enjoyed the process.