I was at a meeting earlier today when I heard this:  Today, for the first time in recorded history, there is snow on the ground in each of the 50 states!

After going back and forth several times, I finally made the decision to actually sign up for the Ravelympics.  Team Michigan.  I'll be participating in the Sweaterboarding event. . . and I'll be making a zipped vest for Tom.  Here's my little "training swatch." 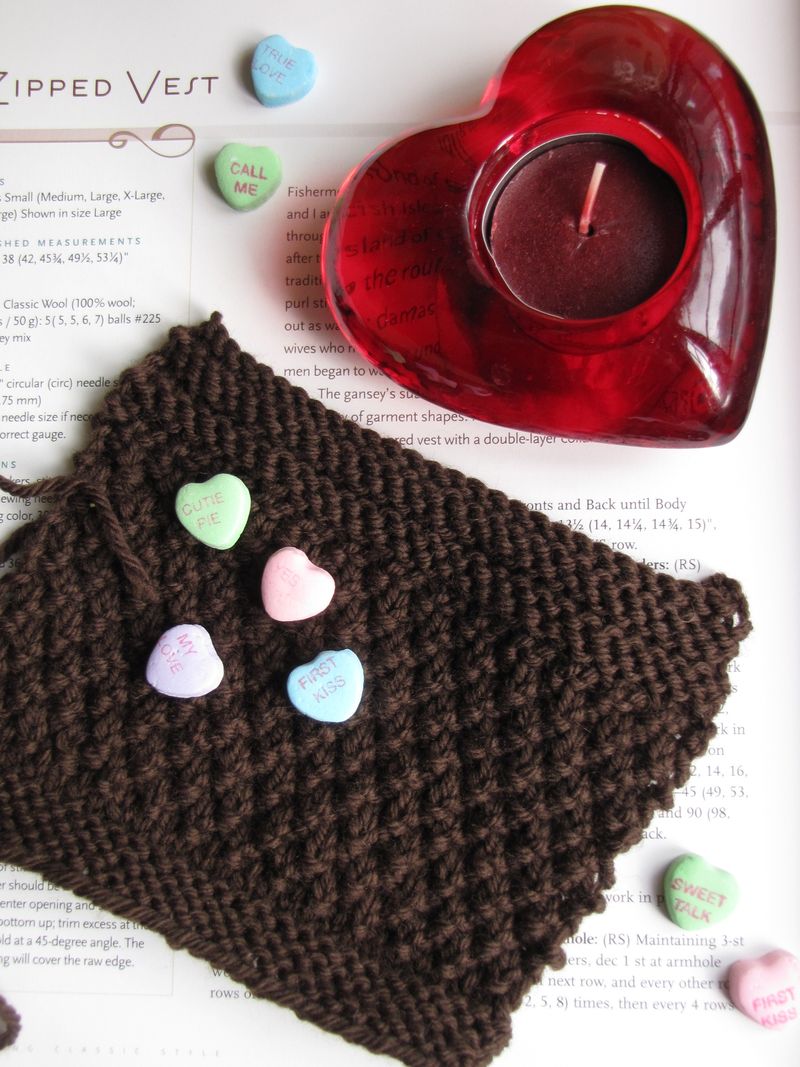 I've been wanting to make this vest for Tom for quite a while.  He's very enthused about it -- cooperating most heartily through the measurement phase, and the yarn selection phase, and even the swatching phase (although he was mostly losing interest by then).

I look forward to casting on tonight - during the opening ceremonies.  It's going to be nice to make something for Tom.  He is always appreciative of my efforts when it comes to knitting --- and very supportive of my little habit.  (He also likes warm vests!)

{Note to Rachel:  I was sorely tempted to join you for the Ropes event.  If the moss stitch on this vest gets to be a little too tedious - which is a distinct possibility -- I will join you for a few "laps" on the Ropes!}

{Note to Lynn:  I was also sorely tempted to join you in making the Every Way Wrap.  I'm going to be watching your progress carefully -- because that is next on my knitting agenda (I think. . .)!}

Brian's hockey team has a little locker room award the coaches give after every game.  It's the Hard Hat, and it goes to the player that has made the biggest effort/difference in the game.  Wednesday's winner of the Hard Hat. . . 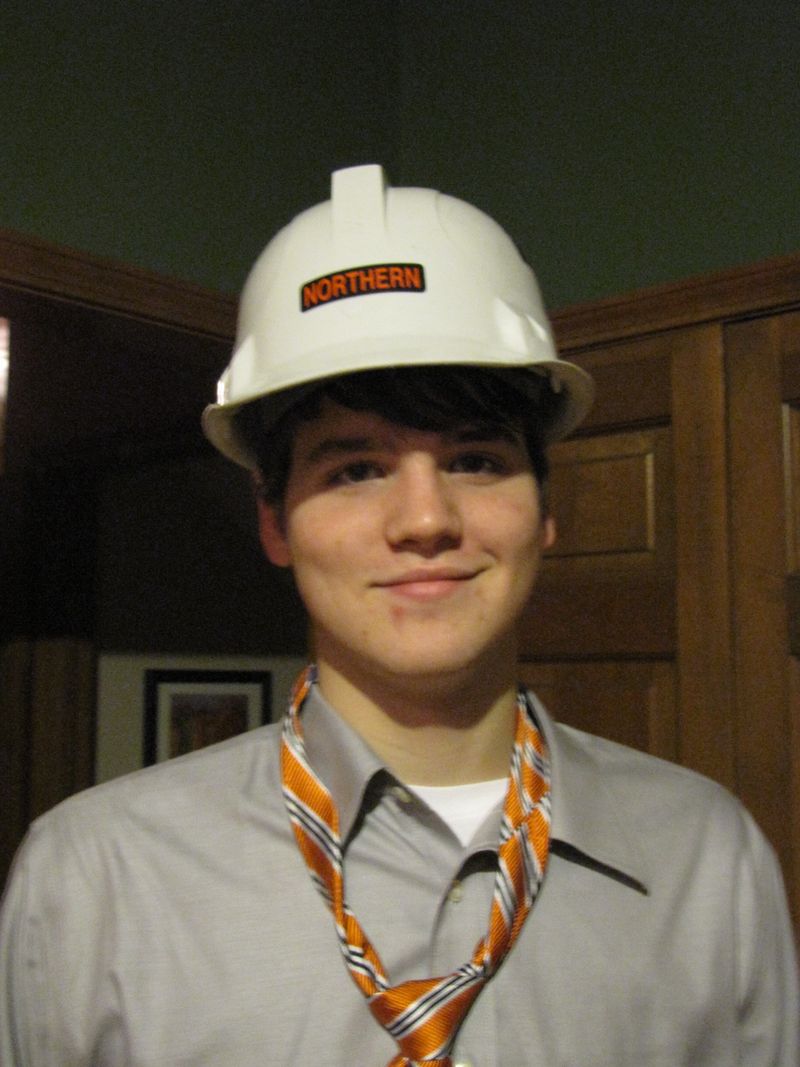 Until yesterday.  We were walking along in one of the no-dogs segments of our route, when she suddenly freaked.  Her hair stood up on her shoulders and she growled and started walking sort of sideways.  She was beside herself.  It took me a minute to figure out what she saw.  It was this: 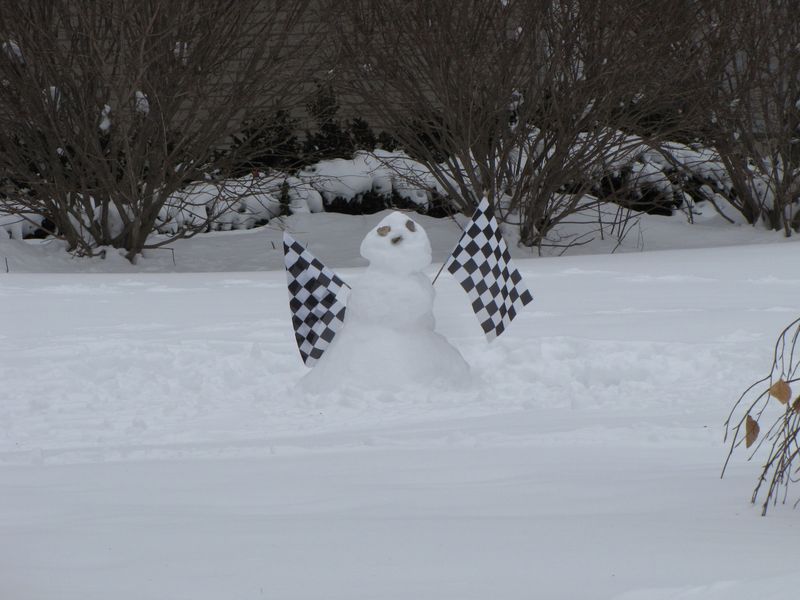 Birds of a Feather

Don't forget -- this weekend is the Great Backyard Bird Count!  It's fun and easy to participate. So far, so good on the sourdough starter.  After nearly 48 hours, I have no trace of any blue, pink, or green liquid in my starter.  Just a very yeasty-smelling mixture with the consistency of pancake batter.  Sourdough. . . here we come! 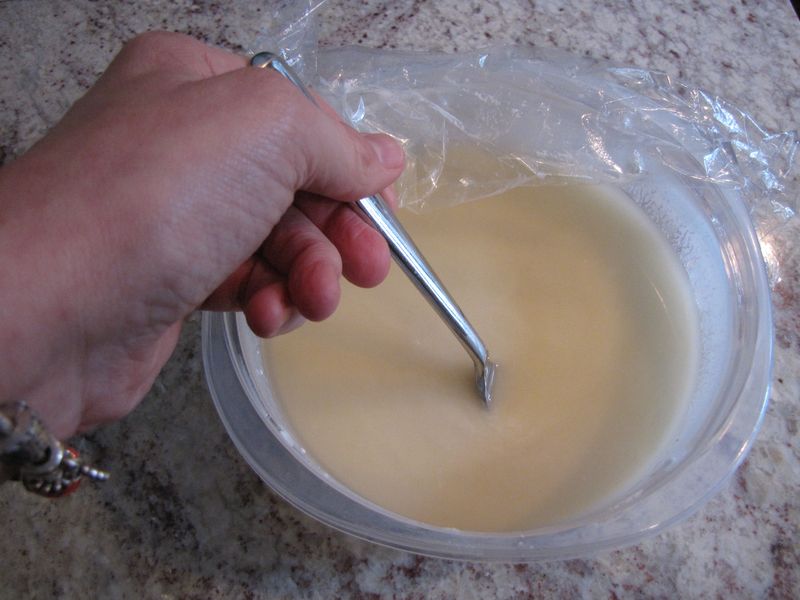 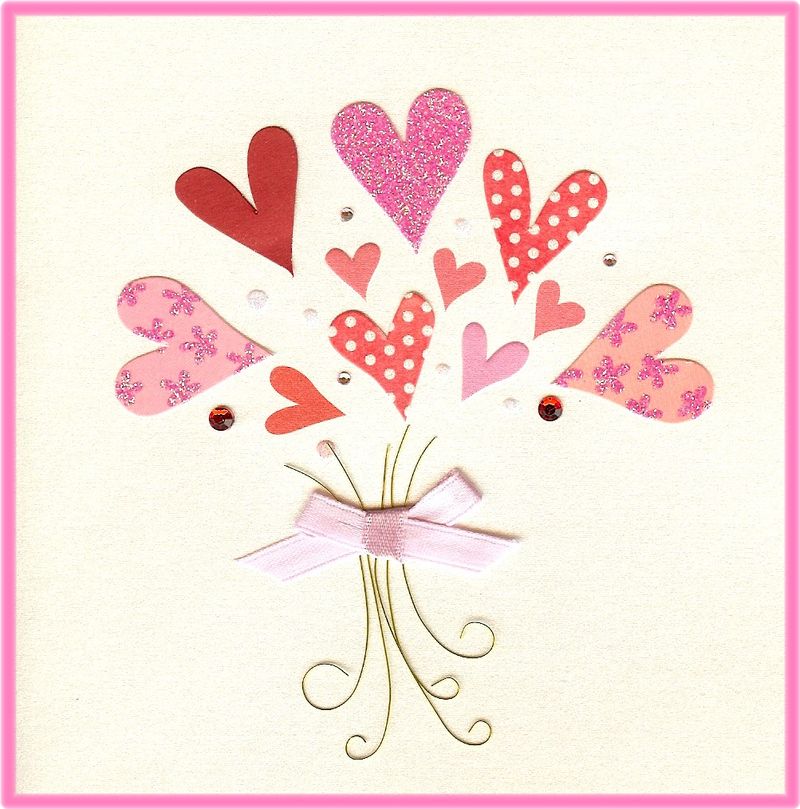 Have a great weekend -- with plenty of Olympics, knitting, and chocolate!

So you're knitting browns? ;^) I look forward to following your progress.

I'm with Jenny. If I had her vision, I would have flipped at that sight of that snowman, too. What's he doing? Why is he standing there? What's with the flags?! o.O

If my d'aling would have wanted anything enthusiastically enough it would have been my challenge in a second, even if he wanted it in brown god forbid :)

It will make me very happy whenever you will come join me for a few laps on our Ropes.

You got yourself one smart dog there and I hope your weekend will be a good one too with loads of open bags of goodies of all sorts :)

Yay to Brian on the Hard Hat award!

Happy Valentines to you too!

I'd bet the checkered flags are because this weekend is the first NASCAR race of the season, the Daytona 500.
It's the harbinger of spring for many fans.
Oscar is a long time fan, and I became a fan last year, initially because we have little enough time together it was nice to spend it in the same room, but then I got to liking a few of the drivers (most do a lot of charity work and there are some great stories, like 50-yr-old Mark Martin coming in second for the championship last year)
I joined the harlot olympics but since I am designing a shawlette, I need to wait for a break int eh brain fog before starting.

Such a nice post! My Olympic knitting is tragic!

Oh ha ha! I KNEW you would join Ravelympics!! I've noticed you have a very hard time resisting a challenge! Can't wait to see your progress on Tom's vest!

Personally, I am having a very hard time knitting during the Olympics. I get so very, very caught up in them all. I started screaming the other night in a really intense moment, and the kids had friends over, and they all came running because they thought I had gotten hurt. One friend said, "See if we run to protect you next time!" They all felt really silly. LOL!!! Can't help myself. The USA is really doing so wonderfully, but that doesn't really matter, I love to see all those kids' hard work and determination.