Hockey movies are big in our house.  We watch 'em all, but have favorites.  Mystery, Alaska.  Slap Shot. Miracle.  They're fun, inspirational, and - generally - have endings that are . . . satisfying.  You know what I mean.  The "good guys" end up winning, or, at least, pulling themselves up by their bootstraps (skate laces. . .) and making a decent show of things.

Life isn't like the movies, though.  And sometimes, things just don't go well for a hockey team.  Like, take for instance, Brian's high school hockey team this year.  It's been a rough season so far.  Not so many wins.  It's not that the boys are unskilled (because that's not at all the case), but this year, situations have conspired to make things . . . challenging.  Lots of rookies.  Inexperienced goalies.  Untimely injuries.  Confidence problems.

It's especially tough when you're a senior.  And you were hoping for . . . more. 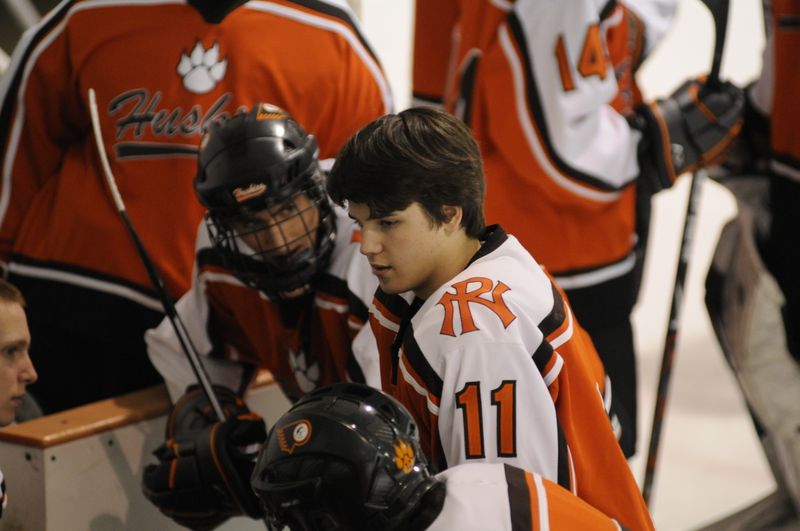 In this difficult season, we've encouraged Brian to continue to play hard; to play with integrity; to hold his head up ---- and to look for the little things that make this season "special" -- regardless of this year's win/loss record.  And so he has.

He was named Captain. 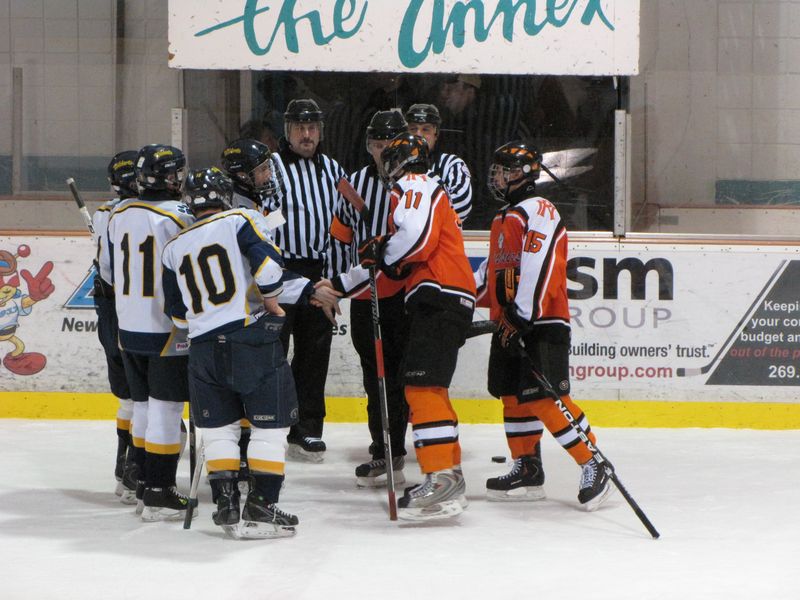 He won the title of "Fastest Shot" in the League Skills Competition/Parent Night earlier this week (71 mph).

And he's being recruited to play hockey at Hope College next year.  These are all Really Good Things, and these individual triumphs help to offset the disappointment of a disappointing season.  We all know better than to think that Ordinary Life is anything like The Movies.

Here's a clip from the hockey movie Miracle (about the 1980 USA Olympic hockey team).  It's a great locker room talk -- from Coach Herb Brooks (played by Kurt Russell) to his team before they went out to meet the Soviet team.

Last night, Brian's team went up against their cross-town rival in a league contest.  Now, this cross-town rivalry is intense and long-standing, and, unfortunately, the Other Team has been dominating for years.  On top of all the "history," the Other Team is having a Very Good Year.  In fact, they are undefeated in the league, and, earlier this season, beat Brian's team 8-0.  We all expected another blow-out.

Brian's team scored first -- and early -- in the game. 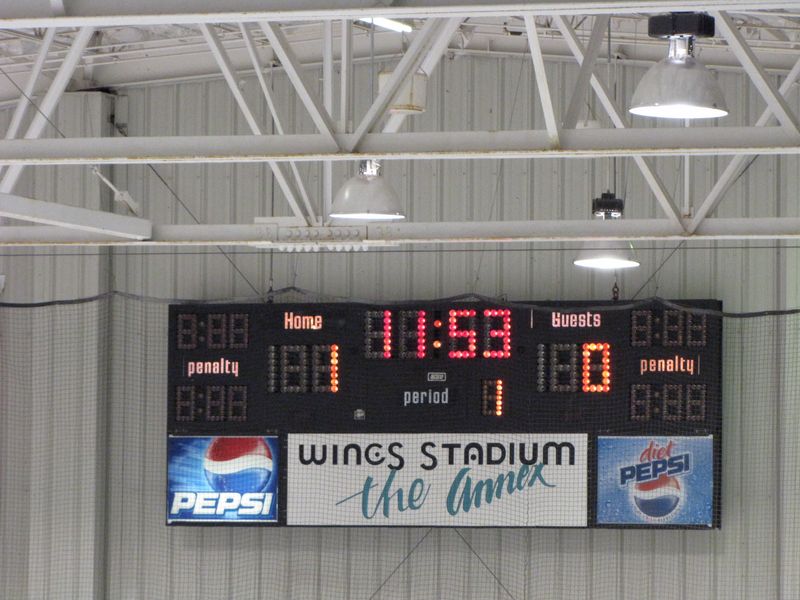 You could hear the sigh of relief.  (Because . . . at least they would have a SCORE on the board in this game.)

Something happened.  There was confidence in the air!  They played well.  Really well.  Their confidence grew.  They frustrated the Other Team.  The crowd (always big in this hockey-loving town, but especially big for this rivalry) went CRAZY. 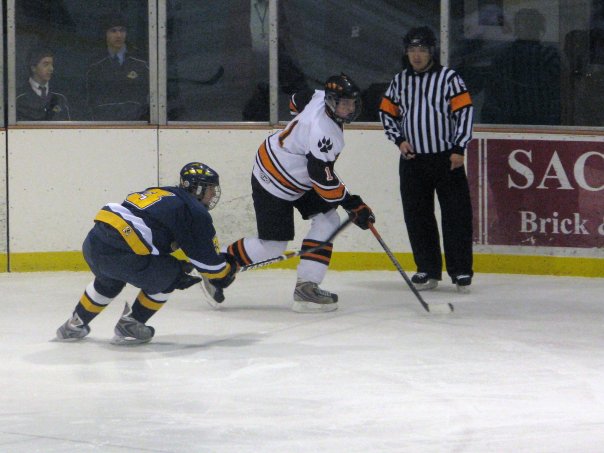 It was . . . like a movie!  It was as if it had been scripted!  Every kid on the team had his Best Game.  They played with excitement and integrity and skill.  And confidence.  The final score. . . 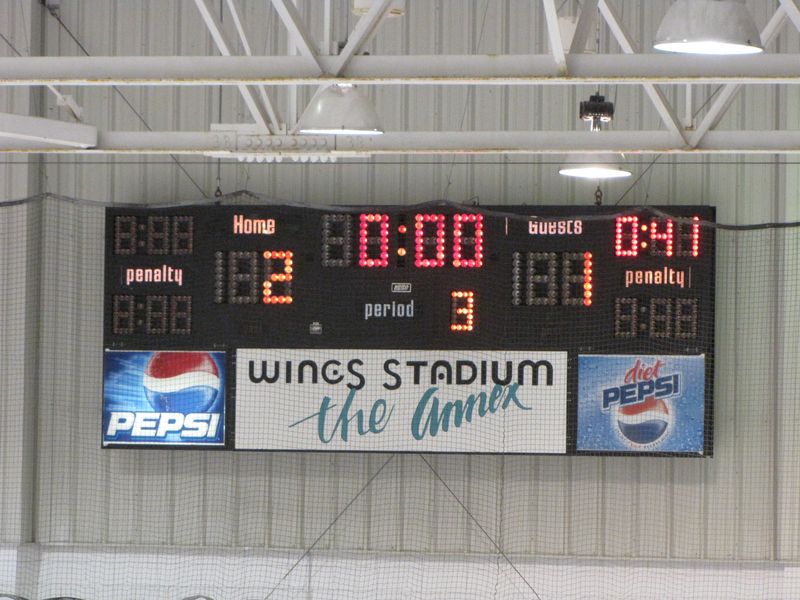 The underdogs beat their rivals -- handing them their first league loss in over two years! 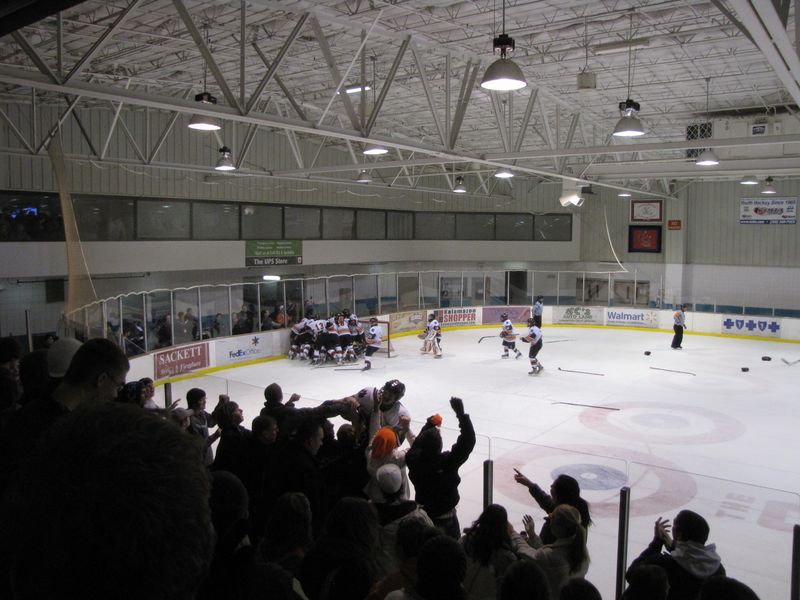 The celebration was as big as if they had won the state championship!  (That's Brian jumping up on the glass to celebrate with some of his former teammates who came back for the game.) 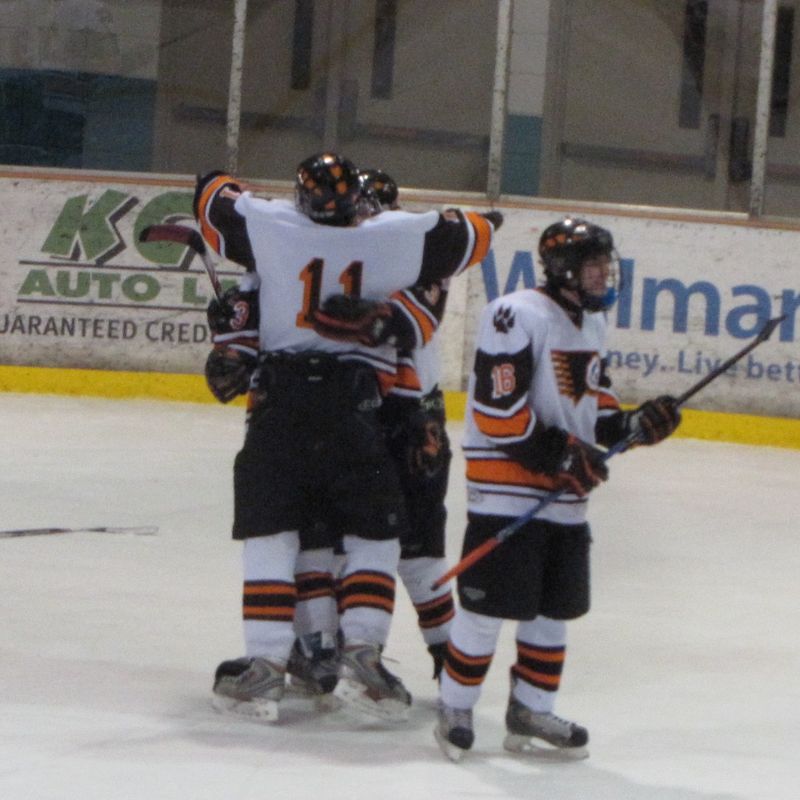 It was a True Movie Moment.  (This is Brian hugging another senior, Brandon, a longtime teammate -- from back in the travel days.)

Do you believe?  I think they do!

Huge congrats to Brian too for all his accomplishments, especially getting recruited by a college!!!!

Now, shame on you for typing so much. You are SUPPOSED to be in recovery! But gheez, what's a proud Mom supposed to do!?!

I've never watched a hockey movie, but I believe!!

I love hockey :-}
My husband has drawn me into Red Wing fandom :-}

Were you crying tears of joy Mom? Made my heart jump! Congrats to the senior - boy is this year going quick!

Well done! I bet that felt so GOOD. Hurrah for movie moments!

Awesome! I felt the excitement build just reading this. Back in 1980 I was working in Minneapolis. The bulk of the US team were hockey players from the U of MN, where Herbie had been the coach. The morning after the game everyone in the office was high-fiving each other.

Hurray! It's fun to be part of a great moment, even vicariously -- thanks!

The rare wins are even more triumphant. Especially when it's a win against a rival. WooHoo!

That was by far the best hockey game I've ever seen. So proud of my giant little brother!