Have you ever heard of the Peter Pan Syndrome?  The term is usually used in a not-so-positive way to describe men who can't quite (or flat-out refuse to) grow up.  Like Peter Pan. 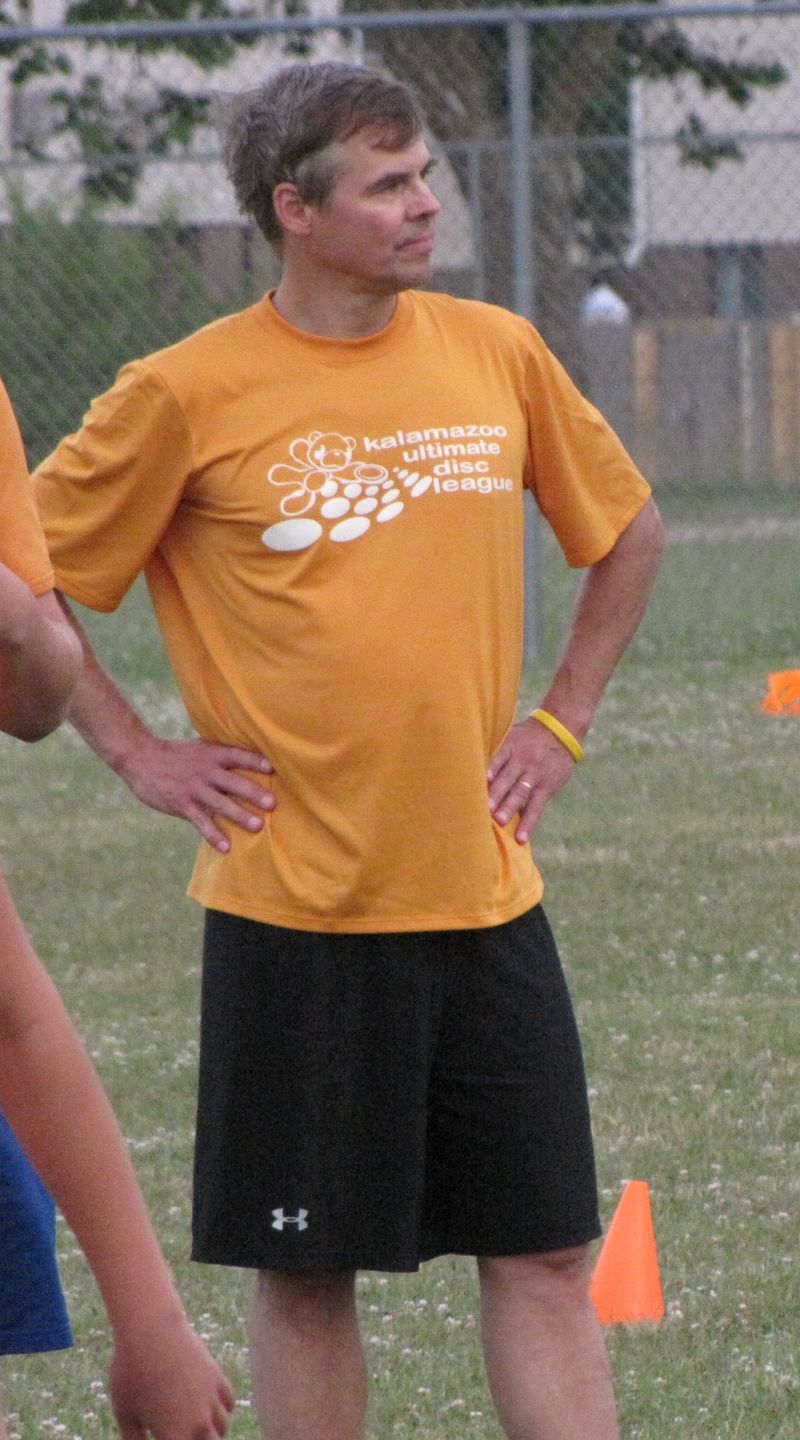 Now, I would never accuse Tom of suffering from Peter Pan Syndrome!  He takes his roles as a parent, life partner, and contributor-to-work-and-life very, very seriously.  He is, most definitely, grown up.  With one exception.  When it comes to sports and games, Tom has his feet firmly planted in Neverland!

Tom has always been an athlete.  He ran track and cross country in junior high, high school, and college.  (In fact, he's still running!)  Here's a very old photo of Tom running when he was in college.  (At least, I think it's college -- because that's the Boise State University stadium (before the grass was blue).  But he has on his old high school singlet. . . so I'm a bit confused.) 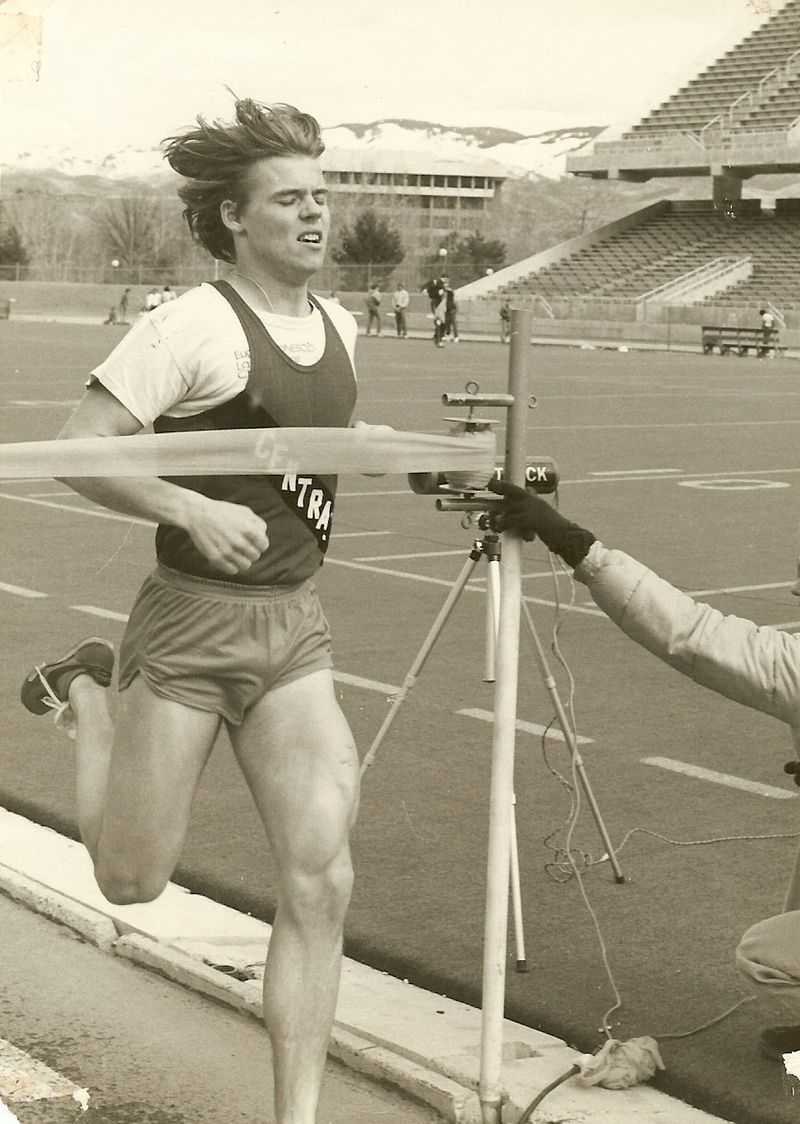 Besides the running, though, Tom likes sports of all kinds.  Over the years, he's played softball, baseball, football, basketball, soccer, ice hockey, disc golf, and Ultimate frisbee.  He skis.  He works out at the gym.  He's always challenging himself with new sports -- this year, for example, he discovered curling!

Three years ago, Tom decided that he'd like to get involved in the Ultimate disc league here in Kalamazoo.  Now, mind you, Tom hadn't played Ultimate since his grad school days --- almost 30 years earlier!  He was on the cusp of his 50th birthday.  But. . .Neverland called! 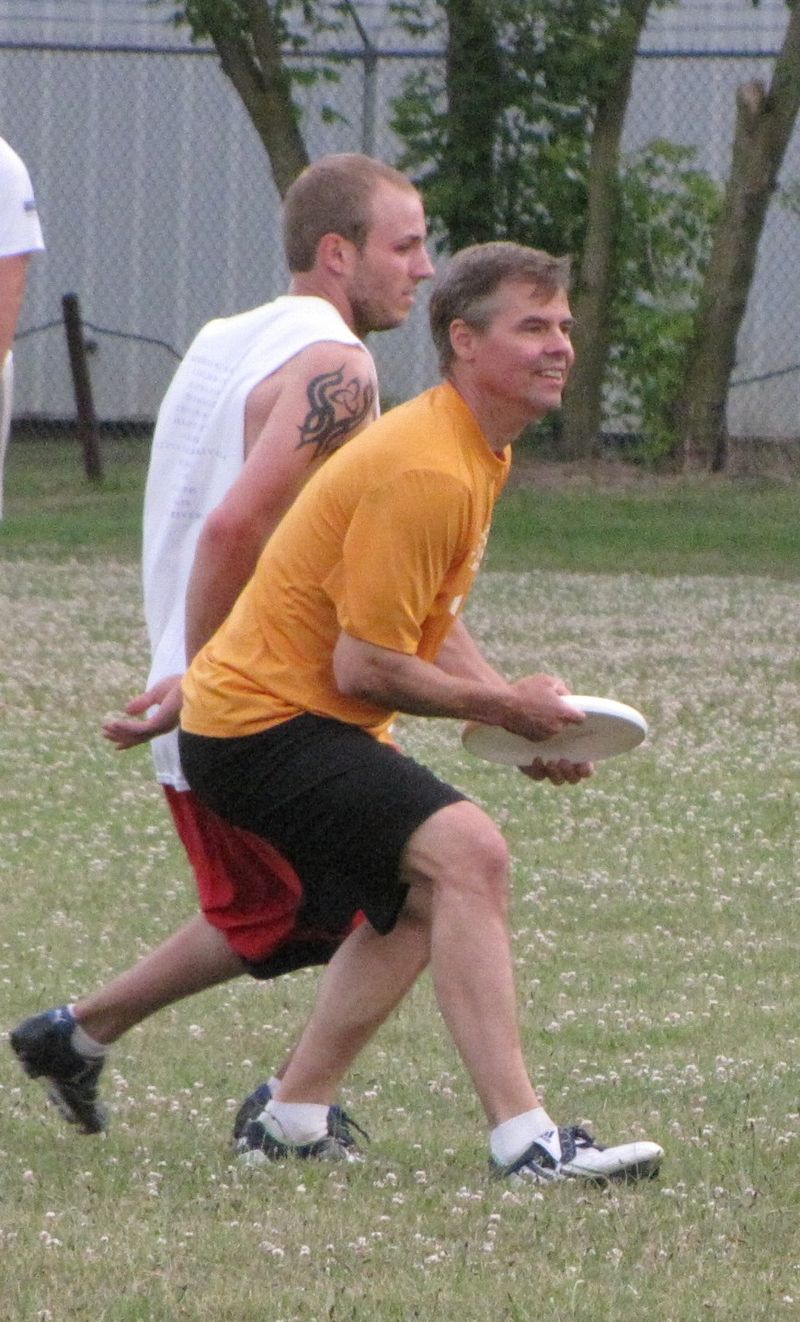 You can find him on Wednesday nights now, playing in the KUDL competitive league.  Most of the folks that play in this league are in their early-to-mid 20s --- closer to our daughter's age.  There is an extremely talented 12-year-old on one end of the Bell curve. . . and then there is Tom, at 50, on the other end!  I don't think, though, that the other players know that Tom is 50!  I'm sure it's obvious that he's . . . old.  But I think they'd be surprised to find out HOW old! 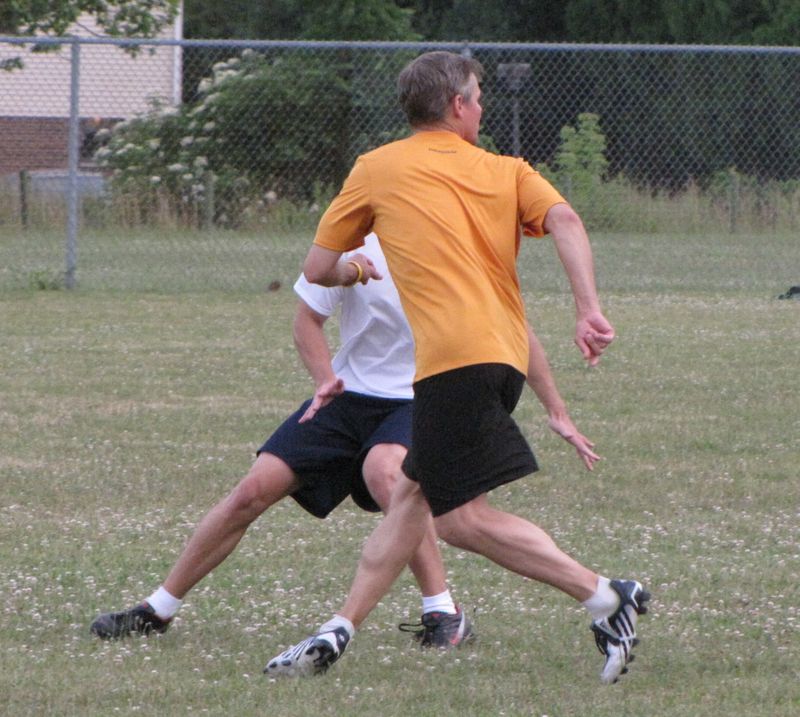 In fact, once Tom asked one of his teammates who a particular player on another team was --- and his teammate described this other player as "that old guy, over there."  That "old guy" is 28!  I'm pretty sure they have no idea that Tom is . . . old enough to be that "old guy's" dad!!! 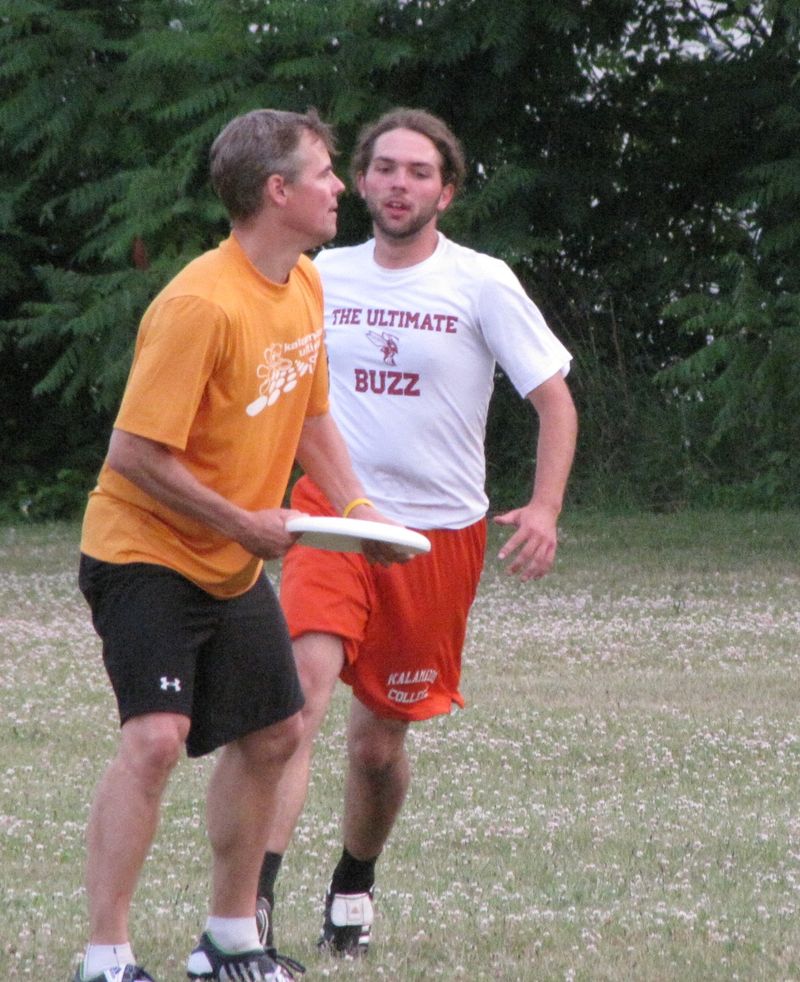 Living with an athletic Peter Pan has had a huge impact on my own thoughts about growing older -- and taking care of myself.  I've folded many of Tom's attitudes into my own, and these attitudes have served me well as I went through chemo and now. . . as I figure out how to be a survivor.  Tom has shown me that you don't need to be defined by your age -- or your disease.  He's demonstrated that, when things get tough, sometimes you just have to grit your teeth, dig deep, and push through.  He's taught me the importance of setting goals, finding fresh activities, and the value of rest (and proper stretching!).

I'm lucky to be along with him in Neverland. . . 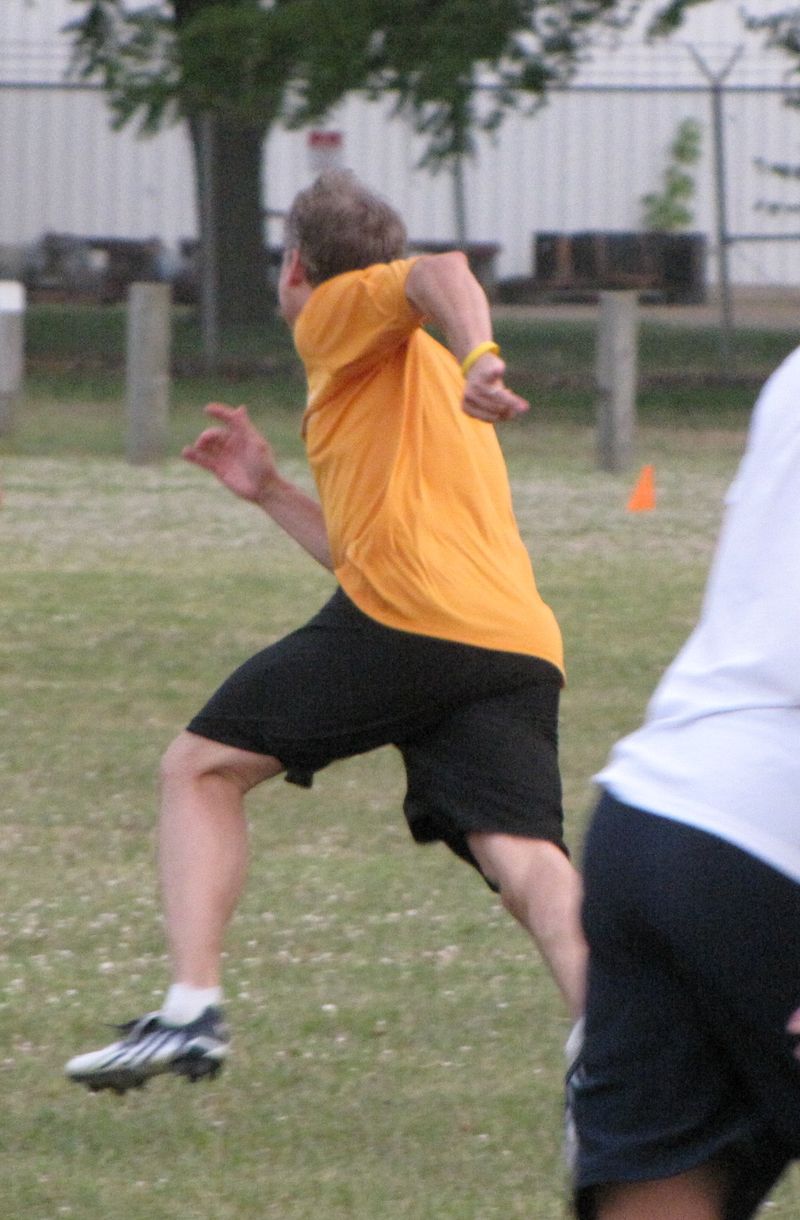 of course, I do have to keep up!

You two will live long and well together with that attitude! Keep it up!

Fantastic. May we all live a bit in Neverland.

You are both lucky, indeed!